I’ve never been sufficiently involved with radio to quite understand Tom Petty’s lament about the passing of the independent disc jockey as “the last human voice.” But even if I missed hearing Wolfman Jack live in his prime, there are times when I’m listening to my favorite music in iTunes or on my iPod that it feels, well, a little repetitive. Sure, being able to play random selections from the 4,800 tracks in my iTunes library means I’m not listening to the same songs over and over again, but in contrast to the days when I listened to the radio, even my favorite songs can sometimes feel a bit one-dimensional. The reason: no human voice introducing them, or relating a bit of
background at the end to give some depth and background.

Thanks to the Web-enabled SpotDJ, you can now add a panoply of human voices to your existing music, whether you play it in iTunes or on the iPod. SpotDJ comes from a tiny San Francisco company founded in part by Scott Kleper, who made a name for himself in the Mac world back in the late 1990s writing the KlepHacks shareware programs.

Getting Spots Out — Once you sign up for a free account and download the SpotDJ software (available for both Mac OS X and Windows; nearly 40 percent of the users are Mac users), you simply play songs in iTunes, just as you normally would. Whenever the SpotDJ application detects that you’re playing an artist or song for which someone in the SpotDJ community has recorded a “spot” – a short spoken piece – it waits until iTunes finishes playing the song, pauses iTunes, and streams the audio spot, starting iTunes again at the end of the spot. It’s that simple.

An option on the SpotDJ Web site let you control how often spots play, since hearing a human voice every so often is quite nice, but having someone talk after every song could become annoying. For the moment, SpotDJ is also restricted in how often it plays by whether or not it has any matching spots for a particular song or artist. The more esoteric your music, the less likely you are to hear spots. You can also choose to hear spots in English, in the language you record spots in if it’s not English, or both.

Of course, not all spots are equally well done, so you can use the SpotDJ application (which is essentially a Web interface in a custom window) to rate the DJ from 1 to 5 stars, or add the DJ as a favorite. Your ratings and favorites help control which spots you hear; if you don’t like a particular DJ’s comments, rating them poorly will ensure that you won’t hear from them again (to quote Lady Macbeth, “Out, damned spot! out, I say!”). You can also leave text comments about particular spots; SpotDJ is new enough that I haven’t seen many comments yet, though I seldom watch the SpotDJ interface while listening to music. 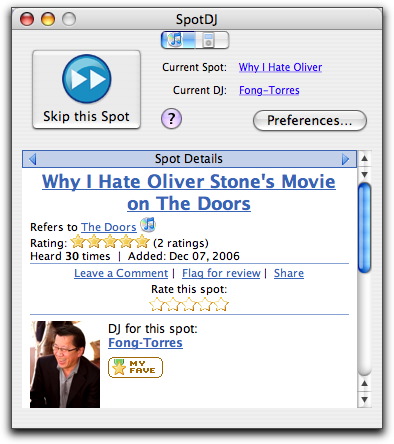 Adding spots to your iPod requires a bit more work. Click the little iPod tab at the top of SpotDJ’s window, select a playlist, and click Create Spotted Playlist. SpotDJ analyzes your playlist data, looks for associated spots, downloads the spots (normally they’re streamed, but that won’t work on the iPod, of course), and then creates a new playlist that interleaves the songs and the spots appropriately. After that it’s merely a matter of syncing that playlist to your iPod and making sure that you’re not shuffling songs.

Getting Spots In — Of course, listening to spots is only half the fun. The entire point of SpotDJ is that anyone can be a DJ and can contribute spots about their favorite songs. When you find yourself wanting to record a spot for the current song, just stop it, switch to SpotDJ, and click the Spot This Song button. In the drawer that appears, you can record your spot and preview it, repeating those actions until it sounds the way you want. (Please use a decent headset or microphone!) Then click Upload and your spot is automatically uploaded for everyone else to listen to. Spots can be specific to a song or can apply to anything by a particular artist.

Although it’s easiest to record a spot directly in the SpotDJ application, you can also record spots on the SpotDJ Web site, by uploading a pre-recorded bit of audio, and even by calling the company on the phone and leaving a message.

I don’t have any particular recording experience, so I found that I had to write my spots out first and then read them into the headset mic, but after the first one, it was easy. I doubt my spots will be heard all that often, since I attached them to specific songs that probably aren’t terribly popular right now, but you can listen to them on my DJ page.

Once you’ve recorded spots, you can also use tools on the SpotDJ site to email a notification to friends or to create an HTML snippet for embedding a customized SpotDJ badge on your Web site.

The Human Voice — Although SpotDJ isn’t the most elegant application around, it’s simple to use and is sufficiently unobtrusive that it’s easy to leave running. I’ve been using it for a few weeks now, and I quite enjoy hearing the spots.

The best ones I’ve heard so far are from Ben Fong-Torres, a fixture in the music world who wrote for Rolling Stone and who has many years of experience as a DJ. His many spots, apart from being impeccably recorded, also often feature recorded interview clips with famous musicians he was interviewing for Rolling Stone.

Perhaps the most obvious use of SpotDJ is for artists to record spots about their own songs – doing so both adds value and could serve as a marketing tool because SpotDJ plays spots after 30-second previews in iTunes as well. Other ways spots have been used is for relating trivia, providing reviews, pointing listeners to related music, offering interpretations of ambiguous lines, or just telling stories about the music. I could even see SpotDJ being used for music education classes.

Right now, SpotDJ has thousands, but not tens of thousands, of spots, but that number only stands to grow as more people find SpotDJ and realize how easy it is to record spots. It’s a little addictive, and great fun for anyone who is interested in sharing opinions about music. And like the iPod, I think SpotDJ is one of those services that somewhat transcends generations; aging hippies can participate just as happily as young hipsters. We’ll see…

SpotDJ is entirely free right now, and isn’t currently doing much with the usual approach of advertising and affiliate sales. In part, I suspect that’s because it makes more sense to license the technology and content database to a larger player – can you say “iTunes”? I’d certainly like to see Apple do so and build it into iTunes and the iPod directly.

The more I think about SpotDJ, though, the more I think Scott and the SpotDJ folks are on to something larger. It’s bigger than music, though music is a great start. What SpotDJ is enabling is ad hoc audio commentary on arbitrary virtual objects. Podcasting may be all the rage, but it’s far harder to record a podcast than it is to contribute a spot to SpotDJ, and podcasts stand alone, whereas SpotDJ spots are linked to songs.

What if SpotDJ could play spots when you visited particular Web pages, or viewed a particular book on Amazon.com? Most things on the Internet don’t have obvious end points, so you’d need a little more control over when spots were played, but imagine loading a TidBITS article and having a SpotDJ menubar icon display a “5” badge to indicate that there were 5 comments about the article. Clicking the menu would reveal them, in order of relevance, based on your preferences and others’ rankings, and you could play one or all of them, while you continue to go about your business. It would all be optional, of course, but it could provide an additional dimension to our everyday browsing.

But that’s all just possibility – for now, just check out what SpotDJ can do for you in iTunes and on your iPod.