Whew! We want to thank everyone who came together yesterday for what was truly our most inspired April Fools issue ever. Joe Kissell’s remote-controlled, animatronic monkey was definitely the highlight, and we hope that his landlord will be understanding about all the damage – who would have suspected that the folks at MacUser.com were so adept at remote AppleScript programming?

So, we didn’t actually create an April Fools issue this year. With April 1st landing on a Sunday, we figured it would be confusing for readers who pick up their email at work on Monday to be treated to tomfoolery on the wrong day. And, to be honest, we’re all crazy busy right now with other projects.

Therefore, we decided to skip April Fools this year and store up our ideas and energy for next year, when April 1st falls on a weekday.

However, don’t think that we weren’t keeping our eyes out for other April Foolishness online. The date may have passed, but you can still enjoy some of the efforts of others that we found to be exemplary.

Fools Abound — Because electrocuting yourself is just so darned hard, we’re glad that the folks at Art.Lebedev Studio have come up with the Vilcus Plug Dactyloadapter, available with adapters for both U.S. and European plug types. Shocking! 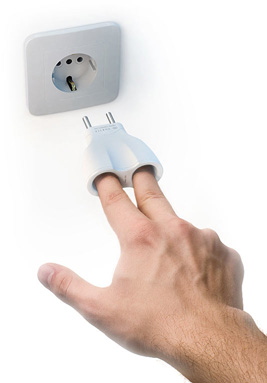 Google Underground — Google announced their solution for bringing broadband Internet access to any home. Google TiSP (Toilet Internet Service Provider) is free in-home wireless broadband that connects through city sewer lines. It’s not as funny as some previous Google efforts, but it plays off the fact that fiber optic lines are, in fact, often run through old sewer pipes.

Going back to the future, Google also announced Gmail Paper, a service that prints and delivers your email for free, thanks to “relevant, targeted, unobtrusive advertisements, which will appear on the back of your Gmail Paper prints in red, bold, 36 pt Helvetica. No pop-ups, no flashy animations – these are physically impossible in the paper medium.”

ThinkGeek — In addition to reselling the Vilcus Plug Dactyloadaper, the folks behind ThinkGeek offered up a bounty of geeky gifts. The ThinkGeek 8-Bit Tie is sure to take you back to those early Nintendo days, but we particularly liked the idea of the SnuzNLuz WiFi Donation Alarm Clock: every time you hit the snooze button to sleep in for just a few more minutes, the clock makes an electronic direct-deposit donation to a charity or organization you despise.

Windows Security Advisory — In this age of heightened security, it’s beneficial to examine every aspect of our surroundings, especially the things we see so often that we no longer register them as threats. The Computer Academic Underground released a white paper detailing the problems inherent in non-opaque structural materials (“Window Transparency Information Disclosure“) that states, “An information disclosure attack can be launched against buildings that make use of windows made of glass or other transparent materials by observing externally-facing information through the window.”

Toddler Settlement Rate and the NSA in Second Life — The April Fools edition of the EFF’s EFFector newsletter was particularly biting this year, with a piece about how the National Security Agency (NSA) will be opening an office – a large black box in an undisclosed location – in the virtual world of Second Life. Also hilarious was the bit about how the RIAA has sent a “settlement letter” to all parents of children under 3 years old, offering a discounted settlement rate if they pay in advance for their children’s inevitable future copyright infringements.

Wait Until Next Year — Although April 1st fell on a Sunday, there was clearly a lot of effort online put forth to fool or amuse us. If you have some time to kill, be sure to check out Urgo’s 2007 list of April Fools’ Day jokes on Web sites. In the meantime, we’ll be storing up ideas for next year!

April Fools Uncategorized
Cookies & Privacy: We wish we were talking about chocolate-chip cookies here, but our Web site—like nearly all others—relies on a few minor digital cookies. Various laws around the world require us to tell you that fact, so consider yourself informed, if not nourished. By continuing to use this site, you agree to our use of these cookies. Cookie and Privacy Notice