One of the great things about the iTunes Store has been the way it lets you buy single songs without having to purchase an entire album. I own too many CDs that contain only one or two songs I like; the rest of the selections just don’t hold my interest. I’m especially bad about this if I go into a store (such as the excellent local Sonic Boom Records), listen to a couple of tracks or parts of tracks, buy the album thinking I’ve stumbled on some cutting edge band, and then discover later that the disc wasn’t so hot (and that my radar for new music is still subpar, darn it).

Occasionally, though, I’ll buy a single song and then realize that the rest of the album is worth buying. Purchasing the album from the iTunes Store would result in a duplicate of that single, and if there were more than nine songs on the album, it wouldn’t be worth buying them individually to avoid duplicating the one I already own.

Apple has now introduced Complete My Album, a new feature that gets around the problem. When you click the iTunes Store link for a song (the arrow to the right of the song title in your iTunes library), a Complete My Album option appears, listing the cost of the rest of the album and a Buy button. So, for example, if you’ve purchased one $0.99 track, it will cost you $9.00 (plus tax) to purchase the rest of the album’s tracks. 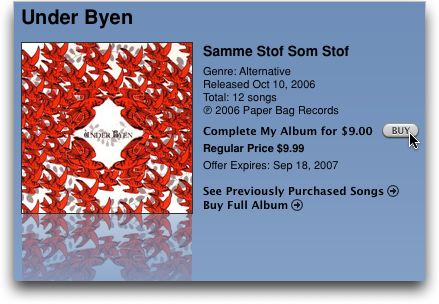 Apple says that the Complete My Album feature applies to qualifying tracks for up to 180 days after you’ve purchased the singles. However, I’ve noticed that the feature currently applies to singles I purchased when the iTunes Store first opened, too.