Google has released the first public beta version of Google Desktop for the Mac, an application that rapidly searches files on your computer, messages in your Gmail account, and Google’s existing index of Web pages, all in a single interface. The file is a 2.8 MB download, accessed through another new Google application, Google Updater, which provides a centralized interface for installing, opening, updating, and uninstalling Google’s Mac software. Google Updater is a 1.0 MB download.

Google Desktop begins by indexing all your files in the background, a process that company representatives said should take a few hours on average. You can perform searches before the indexing is complete, however. Although it maintains its own index, separate from Spotlight’s, Google Desktop makes use of any Spotlight importers installed on your system (which is why it requires Mac OS X 10.4 Tiger). That means it can search for and display such items as Mail messages, Address Book contacts, PDF files, and Safari bookmarks. Our testing has shown that Google Desktop’s indexing can be significantly slowed by the presence of certain Spotlight importers; they can be disabled temporarily for now, and Google is working on a fix.

Google Desktop adds indexing of new data types, including Gmail messages and your Web history. That’s right: it indexes entire Web pages as you browse them, so you can quickly search for the content of pages you viewed last week or last month, even if you don’t know the URL (and even if the pages’ content has changed since then). Previously, this feature has been available only to OmniWeb users, or to those who have added St. Clair Software’s HistoryHound or SmileOnMyMac’s BrowseBack to their Macs.

Perhaps even more interesting is the fact that Google Desktop indexes and caches copies of your local files (such as word processing documents) each time you open them. So it functions as a sort of version control system: even if you delete or modify an important file, you can search for a previous version and recover it.

Keep Your Search to Yourself — Google Desktop respects Spotlight’s privacy settings; any volume you’ve told Spotlight not to index will be ignored. You can also enable or disable indexing individually for each mounted volume, Gmail, and Web history; by default, Google Desktop won’t index secure Web sites using https:// URLs. A variety of other preferences can be set in a Google Desktop pane of System Preferences. Search results include only those items for which the currently logged in user has access privileges, and remote connections to the program’s built-in Web server are disallowed.

If you want to remove some file from Google Desktop’s local index, you can search for it and then click a Remove from Index link in the Web interface. However, the program does not currently give you detailed control over the size of its index or the length of time old files are cached; Google says to expect a greater level of customizability in future betas.

A Tale of Two Interfaces — You perform a search with Google Desktop in either of two ways. One is to use your favorite Web browser (as long as it’s Safari, Firefox, or Camino – others are not yet fully supported) to open a special Web page delivered via Google Desktop’s built-in Web server that only your computer can access. On this page, which looks almost exactly like the Google home page, you enter search terms and click either Search Desktop or Search the Web. The results are displayed almost instantaneously (in the standard Google format), just as if you had visited Google directly. You can also filter the results by email, Web history, files, and media, and sort by relevance or date.

An easier way to search is to use a user-definable keyboard shortcut (by default, press the Command key twice) to display a floating, translucent search box. As you type in search terms, results from your computer are displayed immediately; press Return to open the first result or click another to open the associated item. Or, after typing your search terms, select the Search Web menu command to perform a standard Google Web search on those terms in your default Web browser; you can also press the up arrow key to highlight the Web search option, and then press Return. (And if you’re faster than Google Desktop, pressing Return before any results have appeared performs a Web search too). 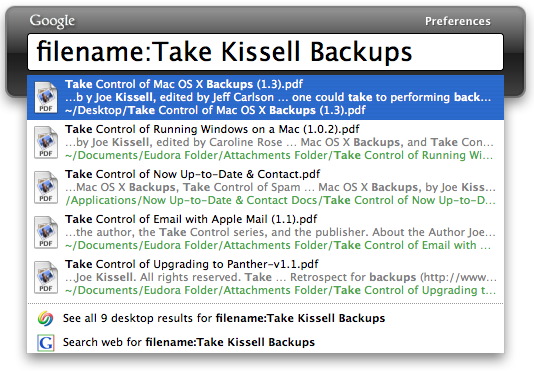 When you perform a normal Google search in one of the supported Web browsers, Google Desktop also adds a few lines at the top of the search results that alert you to relevant files on your hard disk.

Like application launchers such as Objective Development’s LaunchBar, Quicksilver, and Many Tricks’ Butler, Google Desktop includes a learning algorithm that reorders search results based on a variety of factors, including which items you’ve opened recently (in Google Desktop or otherwise). So if you typed “s” and chose Skype from among the options, even though Safari was at the top of the list, Skype would be ordered before Safari in future searches. However, the current version does not yet look for things like initials, so you could type “act” to search for Activity Monitor, but not
“am.”

Staff Roundtable — Several TidBITS staffers spent some time testing Google Desktop prior to its release. Although this is the first beta and our conclusions are only preliminary, we would like to share some of our initial impressions.

[Joe Kissell] I have to say that my very first impression with Google Desktop was rather negative, because the initial indexing was freakishly slow while putting a big strain on my iMac G5’s CPU. After discussing the problem with Google engineers, we narrowed it down to an old version of the Spotlight importer for MailTags that was installed on my system. Once the offending file was removed, indexing sped up immediately and I was able to test it properly. My second impression was: Wow. This is so much faster than Spotlight, it’s ridiculous. I was impressed not only by the speed of the searches but their quality; Google Desktop has been, so far, more likely than Spotlight to show the item I’m looking for high in the list. I’m
also intrigued by the version control feature, though time will tell how well it stacks up against Time Machine and other third-party solutions, such as Acertant’s Versomatic.

[Jeff Carlson] Like Joe, my initial experience with the beta has been less than ideal. But to be fair, I haven’t had a chance to troubleshoot much due to other active projects, and this is beta software. I found the indexing to be extremely taxing on my system (a MacBook Pro with a 2.33 GHz Intel Core 2 Duo processor). Also, disabling indexing and quitting the application didn’t help until I restarted the machine; the hard drive continued to chug away as if it were still indexing. Those caveats aside, I’m optimistic about the tool, since I find myself rarely using Spotlight. At the very least, Google Desktop beats Spotlight in the capability to find a file by looking for its filename: type “filename:” and part of the name of a file
(with no space after the colon).

[Adam Engst] Initial indexing on my system was also very slow, but after hearing of Joe’s rogue Spotlight importer, I disabled all Spotlight importers I could (find a list of them by entering the following command in Terminal). Then I uninstalled Google Desktop and deleted its indexes using Google Updater (which promptly uninstalled itself too, since the current version of Google Earth doesn’t yet know about Google Updater, so Google Updater erroneously thought Google Desktop was the last Google application on my Mac) and reinstalled. After that, indexing proceeded much more quickly, and it completed in less than 12 hours (whereas previously it wasn’t even half done after 24 hours).

I am bummed that Google Desktop doesn’t fully support OmniWeb, so although you can send a Google Web search to OmniWeb from Google Desktop, opening a file from the results loads a blank page, and Google Desktop results don’t appear in pages with normal Google search results. I’ll be interested to see if I end up using Google Desktop much, since finding things on my Mac isn’t a problem I have, although I search the Web with Google many times each day. Because of that, I’d like to see a single keyboard shortcut like Control-Return for performing a Web search on the entered term because otherwise it requires pressing Command twice, typing a term, pressing the up arrow to select Search Web For… at the bottom of Google Desktop’s search
results, and then pressing Return. There’s no reason to require two keystrokes for such a common user action when one would suffice.

Most concerning about the current beta of Google Desktop is something that became obvious only in the days after it finished building the initial index. For reasons that Google’s engineers are still attempting to figure out, some people (including me) see Google Desktop hitting the hard disk constantly, which is both disconcerting and a serious performance hit. I worked around this problem temporarily by turning off Google Desktop’s indexing, so I can continue to search for items already in the index. Remember, even though Google has been bad about leaving services like Gmail in beta for years, Google Desktop for the Mac is a real beta at the moment, with all the possible downsides associated with that status.

For more about the Google Desktop beta, be sure to check in on the TidBITS Talk discussion and part 1 and part 2 of my recent MacNotables podcast.