I’ve been critical of iPhoto on several counts since the program’s release in 2002. Could you imagine, for instance, that iPhoto would require you to import every photo on your digital camera even when its predecessor Image Capture provided a selective import capability? And what was with forcing you to title photos and name film rolls in the Info pane, rather than selecting and editing the default name, as has been possible with files and folders in the Finder since 1984?

Well, I’m pleased to note that Apple has taken advantage of the 20-month wait between iPhoto 6 and iPhoto 7 to fix both of these long-standing omissions. You can title photos and name events (which are essentially film rolls, in the old terminology) just by clicking the name and editing the default text. And when you connect a camera or slot a media card into your reader, the new import screen provides an Import Selected button along with Import All. Even better, if you import some photos but not all, a Hide Photos Already Imported checkbox makes sure the imported photos don’t appear in the import screen. Plus, the import process doesn’t have to examine each previously imported photo on the camera to see if it’s a duplicate; previous
versions of iPhoto could skip already imported photos, but the import process took just as long as if it was importing each photo for real. 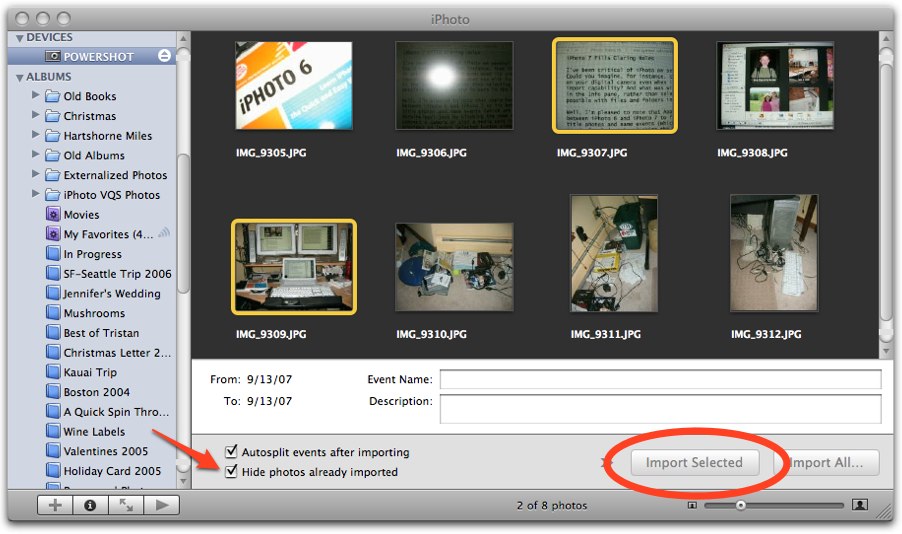 The final area that wasn’t quite as embarrassing, but which hadn’t seen any notable attention from Apple since the earliest versions of iPhoto, is its print feature. In the past, you could select various styles in the Print dialog: Contact Sheet, Full Page, Greeting Card, N-Up, Sampler, and Standard Prints. In iPhoto 7, Apple has completely reworked printing, providing the concept of a “Print Project” with five themes: Standard, Contact Sheet, Simple Border, Simple Mat, and Double Mat. For each of them you can set background color (white, gray, or black), different border styles, and different layouts (some of which offer caption fields, and a Settings dialog lets you tweak fonts). While you’re fiddling with print options, a Printing
item appears in the Recent list of the Source pane, so you don’t have to finish your fiddling in a single session – iPhoto remembers where you are until you print or cancel. 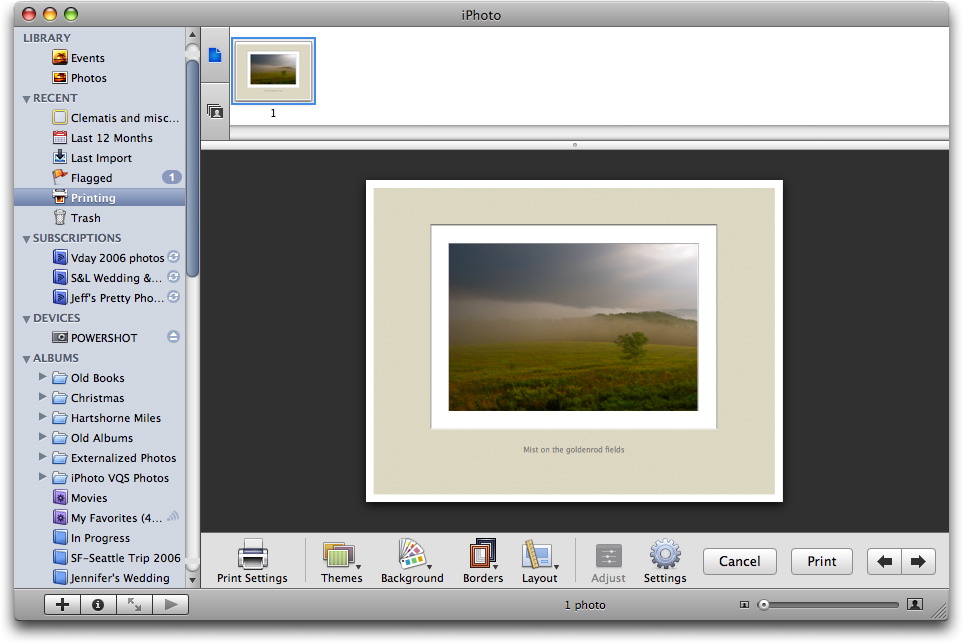 The only previous style that I can’t see how to replicate in iPhoto 7 is Greeting Card, which let you print a photo such that it would appear on the front of a double- or quad-folded piece of paper. This isn’t to imply that the Greeting Card style was useful; you couldn’t add text or embellish the card in any other way, and for all practical purposes, the Card (parallel to Calendar and Book) feature of iPhoto 6 replaced the Greeting Card print style. Cards don’t appear to have changed much from iPhoto 6 to iPhoto 7, and you can still print them to your own printer in addition to ordering professionally printed ones from Apple.

Media Creation Staff Blogs
Cookies & Privacy: We wish we were talking about chocolate-chip cookies here, but our Web site—like nearly all others—relies on a few minor digital cookies. Various laws around the world require us to tell you that fact, so consider yourself informed, if not nourished. By continuing to use this site, you agree to our use of these cookies. Cookie and Privacy Notice