Fake Steve Jobs was in Seattle to make an author appearance at Microsoft yesterday, and I sat down to breakfast with him to discuss his book, his real identity, and how much he likes steel-cut oatmeal. FSJ, as we’ve all known since August, is journalist Dan Lyons, a Forbes magazine editor who has a gift for parodying the self-important, egotistical, every-day-is-a-revolution tone of Silicon Valley executives. Fake Steve Jobs has a passing resemblance to Real Steve Jobs, but the tone is completely invented, and almost always funny. Parts of our conversation appear at The Seattle Times. (Thanks to the iPhone for this blurry photo, but our respective breakfasts came out clearer.) 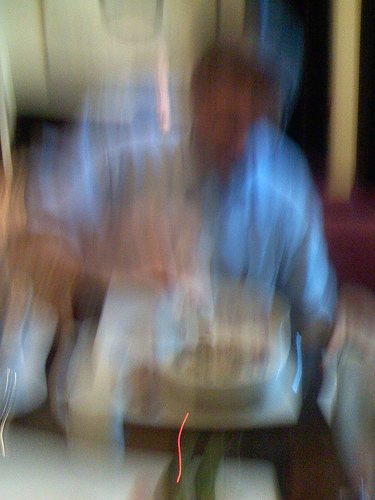 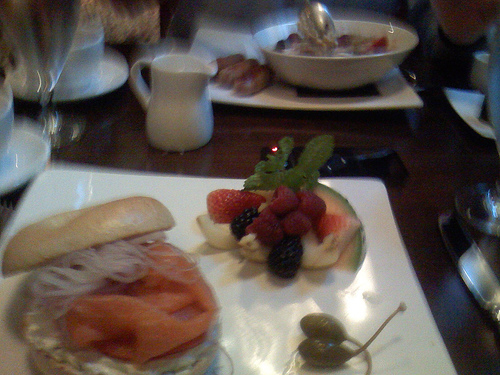 While Andy Ihnatko was widely suspected of being FSJ, he denied it in a rather funny column that appeared at Macworld.com on July 24th. Lyons told me that he and Andy were in correspondence before the rest of the world knew Lyons was FSJ’s creator, and he encouraged Andy to stretch it out a bit!

Lyons is a charming fellow in his 40s, married with 2-year-old twins back home in Boston, and wrestles family life and a full-time job to tap out his daily musings. He had told some of his editors at Forbes about FSJ before it broke when the media wave started to sweep up and over him to avoid duping his employers. When the Times broke the story about his identity, Forbes offered to sponsor the site, which gets a million page views a month. Lyons said traffic peaked in August, when he had 500,000 page views on the day the Times story ran.

Lyons has written a book loosely based on the blog called oPtion$, which purports to be a first-person narrative of FSJ as he goes from golden boy to exile due to an options backdating problem that has some resemblance to Apple’s travails and back to being in charge – before he embarks on an unexpected and strange new journey. FSJ isn’t a three-dimensional character, but he has more inner life than the blog, which focuses on episodic zingers.

I liked oPtion$ despite the fact that it was a little more serious and a little stranger than the FSJ blog. There are a number of laugh-out-loud moments throughout which mostly center on FSJ’s world-beating self-esteem, an encounter with Yoko Ono, and an appearance by Hillary and Bill Clinton. Fake Yoko Ono is holding back The Beatles songs from appearing on iTunes; FSJ threatens in a Zen-like manner to buy The Beatles catalog from Sony and re-record it with Paul McCartney. Absolutely over the top, impossible, but within the realm of the possible in a world where Michael Jackson once owned the music’s rights.

Lyons frequently takes the piss out of his character, whom he has obvious affection for, even though egotism and the pure power of money sort of triumph at the end. For instance, we get this passage when FSJ recounts part of his trip to India at 19, a journey that RSJ took as well. He’s in a private meeting with his guru, Krishna Neeb Baba, who washes his hair and shaves FSJ’s head. The guru asks FSJ, “Do you know why I did this?” FSJ replies, “I’m the chosen one, right? I’ve always known it. I’m the reincarnation of Buddha, right?” The guru says, “Not quite. You have lice. That’s why I shaved your head. You can’t go home to America with lice.”

Baba then reveals that he’s a total fraud, which FSJ had already sussed out, and sends him back to the States with this prescient admonition: “Someone is going to figure out a way to create material things and to imbue them with a sense of religious significance. I don’t know how this will happen. But it will happen, because it needs to happen.”

It’s a rather charming book, shorter on the craziness that makes the blog a form of super-gonzo journalism, like the Onion turned up to high heat. It’s a quick and good read.

Oh, and this movie studio executive totally kills this hobo on page 215. Dude, he just reaches out – and, snap!