I was poking around in my Google Analytics statistics for our article database today, and I happened to load the report that shows how many visits come from different search engines. As you can see in the graphic, Google sent us over 104,000 visits in the last month, compared to less than 1,500 for Yahoo. And Yahoo is doing well compared to AOL (459), Windows Live (402), MSN (394), Search.com (224), and Ask.com (197). Technically, I suppose we could combine Windows Live and MSN (both from Microsoft) for 796 visits, but that’s still only about half of Yahoo’s reach. 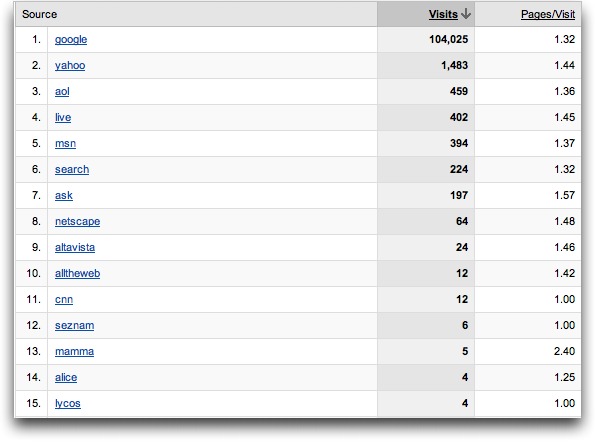 I’m perfectly aware that TidBITS is read largely by Mac users, and even though we get about 30 percent of our visits from Windows browsers, those are usually Mac users at work. And if I look at the platform breakdown for just the visits sent from search engines, Windows makes up 43 percent of those visits. That’s all a long way of saying that I don’t think we’re getting so many visits from Google just because Safari has the Google search bar. In addition, Glenn, who runs the tidbits.com server, confirmed that our raw Web logs show exactly the same pattern, so it’s not just Google Analytics being skewed.

But these results are simply astonishing. Is TidBITS really so unusual that we receive 70 times as many referrals from Google as from the second place search engine? Apparently. According to Nielsen Online, in September 2007, Google served up 3.99 billion searches, accounting for 54 percent of all queries in the month. Yahoo was second with 1.44 billion (19.5 percent), MSN/Windows Live was third with 890 million (12 percent); AOL was fourth with 444 million (6 percent), and Ask.com was fifth with 158 million (2.2 percent). So according to Nielsen, Google served up about 2.8 times as many searches as Yahoo, a far cry from our results.

I’ll admit it – I’m stumped. What could possibly account for Google’s utter dominance in our statistics? I know the crawlers come through all the time, and indeed, searching Yahoo and the others for the same keywords used in the popular Google searches brings up our articles. Do users of Yahoo and the others just not like us?

Inside TidBITS Staff Blogs
Cookies & Privacy: We wish we were talking about chocolate-chip cookies here, but our Web site—like nearly all others—relies on a few minor digital cookies. Various laws around the world require us to tell you that fact, so consider yourself informed, if not nourished. By continuing to use this site, you agree to our use of these cookies. Cookie and Privacy Notice