Discussing ways of lightening your mailbox’s load of paper catalogs in TidBITS may seem a bit unusual, but remember that one of the reasons Tonya and I started TidBITS back in 1990 was to provide an online alternative to weekly technology magazines like MacWEEK. Many of those magazines have disappeared in favor of publishing news online, and although most retailers now sell online too, the onslaught of paper catalogs, particularly around the holiday season (now starting in September!) seems to have increased. Don’t believe me? There are now 19 billion paper catalogs mailed to U.S. consumers annually, consuming over 8 million tons of paper each year.

We’ve long tried to reduce our catalog load by calling catalog companies and asking to be removed, faxing the back page of the catalog with the mailing label on it to the company with a request to be removed, and using the Direct Marketing Association’s Mail Preference Service (which apparently now costs $1). I’m sure it has helped, but the holiday catalog flood is starting anew.

Thanks to long-time TidBITS reader Matt Henderson of MakaluMedia for alerting me to a new service his company has launched in conjunction with the Ecology Center. Called Catalog Choice, it’s an extremely slick Web site that automates the process of asking merchants to remove us from their catalog mailing lists. It’s entirely free, and although it remains to be seen how effective it is (it can take up to six weeks to be removed), I rather enjoyed finding catalogs and asking to be removed in the Catalog Choice system. If nothing else, it felt like I was doing something productive. 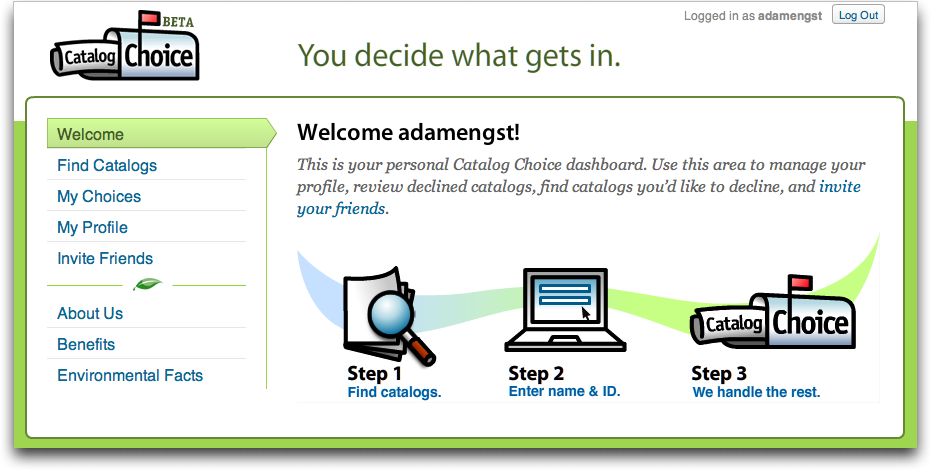 So far, Catalog Choice has proven quite popular, with over 250,000 people opting out of more than 3 million individual catalogs. And we’ve quite enjoyed using it – after school, Tonya and Tristan sit down with the daily haul and opt out of nearly every catalog we receive – 57 so far. We even do this with catalogs from companies we like because Catalog Choice records which catalogs have been declined and includes links to the associated Web sites, making it easy to order in the future.

Don’t get me wrong – I’m not opposed to the concept of paper catalogs in general. In fact, I often find them more effective at conveying information and more enjoyable to browse than online catalogs. But I want to be in control of which catalogs I receive, and I absolutely hate receiving new catalogs from the same companies every few weeks. For instance, until we managed to beat them off, Victoria’s Secret seemed to think we were members of the Lingerie of the Week Club. One or two catalogs a year would be more than sufficient, thank you very much, and if I like them, I’ll keep them around until I get a new one. Of course, I’m old enough to remember the yearly Sears, Montgomery Ward, and JCPenney catalogs that provided hours of youthful
consumer lustfulness and that were heavy enough to be duct-taped into boat anchors.

But in this day and age, I just want most catalog companies to leave me alone. If Catalog Choice can do that, reduce the environmental impact of catalogs, and even save the merchants from wasting catalogs on me, we all win.

Opinion Staff Blogs
Cookies & Privacy: We wish we were talking about chocolate-chip cookies here, but our Web site—like nearly all others—relies on a few minor digital cookies. Various laws around the world require us to tell you that fact, so consider yourself informed, if not nourished. By continuing to use this site, you agree to our use of these cookies. Cookie and Privacy Notice