Seventy-five percent of my family recently suffered an awful virus: emesis, to be polite about it, followed by fever which laid low first our toddler Ben, then our baby Rex, then yours truly. My wife Lynn was initially untouched – the fever eventually hit her after I’d recovered – and so had to minister to a lot of sickos.

The cupboard was already a bit bare, and she was trying to sort out how to get some more food in the house even with Ben (now well) back in childcare – she didn’t want to take the baby out in public and expose others, and I wasn’t well enough to look after him on my own. Despite my addled state, I recalled that we could get groceries delivered via a new Amazon.com service in testing in Seattle: Amazon Fresh. (Lynn fortunately didn’t think I was having hallucinations that flashed me back to the dot-com era.)

Your first thought, like mine, is probably, “Great. They’re taking an idea that failed dramatically several years ago and throwing more money at it.” (See “Groceries in Our Midst” for TidBITS coverage of HomeGrocer, Webvan, and other grocery delivery services.) But I think Amazon occupies a unique position in the marketplace that could allow them to succeed where Webvan and others failed. Amazon already ships millions of items a day.

It’s not that strange to think that instead of using UPS, USPS, and other shippers, Amazon could direct some of the shipping to their own operations by throwing groceries into the mix. Grocery stores have extremely thin margins, as little as 1 to 2 percent, and require huge volume to produce any reasonable return.

If you can add in the high-margin items that Amazon already sells, conserve shipping through internal operations (thus shifting the few dollars an item from shipping companies to your own trucking fleet), and add grocery to provide regular neighborhood stops and a tiny margin, you might have a winning model.

It’s also worth noting that there are still many grocery delivery services, often run by major chains, that typically charge a fee for deliveries of any size. The idea became more widespread but less interesting after Webvan’s spectacular crash. One of the crummier supermarket chains, Albertson’s, has online ordering for home delivery in several cities, for instance.

Amazon could combine some of the best aspects of its own massive warehousing of products, of Kozmo (a totally ridiculous snack and small-item delivery service that I loved; ironically, Kozmo was funded in part by Amazon), and grocery delivery. Consider ordering a DVD and having it delivered along with broccoli later the same day. That’s not a new idea, but it requires a lot of scale and infrastructure to carry out with the potential of profit.

The unattended service has a $25 minimum purchase to avoid a $9.95 service charge; attended service requires $50 or more in an order for free delivery; pick-up service is always free. You can place an order for attended delivery or pre-dawn delivery by midnight the night before; for after-dinner delivery by noon the same day; and for pick up as little as four hours in advance.

We placed an order in the afternoon for delivery in the 8 to 9 AM slot the next day. The driver arrived in a spiffy new truck around 8:10 AM. He offered to bring the bags in, but with Lynn and the baby asleep and the miasma of virus, I suggested he leave them on the porch. 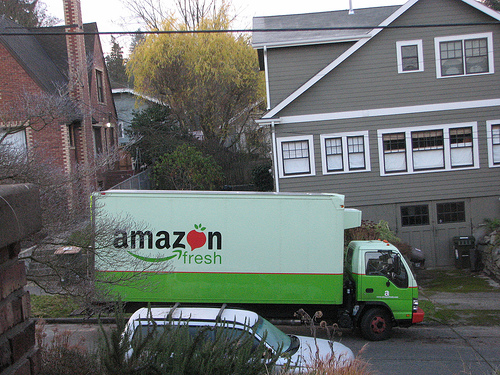 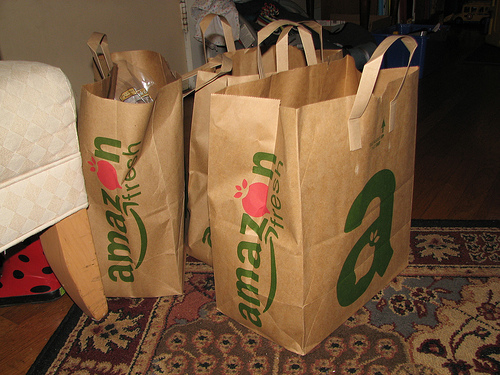 Pricing is comparable to Whole Foods, which many people also call “Whole Paycheck.” Whole Foods tends to have the highest prices for foods we buy regularly; we often cycle through Trader Joe’s, QFC (a division of Kroger), and PCC, a local food co-op, to get the best deals. Unless Amazon is more competitive on pricing, we’ll use it only in a pinch.

Now, I can’t predict if Amazon really will shift shipping to its own trucks, or whether this isn’t just a small-scale test that they’ll never roll out. All I know is that with a house full of sick people, I’m glad to be living in what seems to be the past with the promise of the future.

Groceries in Our Midst Just for Fun Staff Blogs
Cookies & Privacy: We wish we were talking about chocolate-chip cookies here, but our Web site—like nearly all others—relies on a few minor digital cookies. Various laws around the world require us to tell you that fact, so consider yourself informed, if not nourished. By continuing to use this site, you agree to our use of these cookies. Cookie and Privacy Notice