Jon Gotow’s St. Clair Software has just released version 4 of Default Folder X, and in order to explain what that means to me, permit me to remind you of a couple of themes I’ve been harping on going back many years.

First, why aren’t Open and Save dialogs more like the Finder? The Finder is for browsing and navigating your file hierarchy; so are Open and Save dialogs. The Finder is good for opening files; so are Open dialogs. So why are they such totally different worlds? Why are they so disconnected? Why is it still all too easy to save a file, have the Save dialog close, and then go, “Oh, darn, what folder did I just put that into?” In fact, not to put too fine a point on it, when you want to open or save a document from within an application, why are you not, in some sense, in the Finder?

This was a riddle I posed way back in the day (see “Apple’s Dirty Little Secret,” 2001-10-15), when Finder windows and Open and Save dialogs looked nothing like one another. Nowadays, Apple has gone to some lengths to obscure the differences between the two: Open and Save dialogs have acquired the power of Spotlight (see “Spotlight Strikes Back: In Leopard, It Works Great,” 2007-11-01), the Finder sidebar (and, in Leopard, the ability to customize it), views that are sort of like the Finder’s views (including, in Leopard, icon view), the capability to summon the Get Info dialog (by, uh, switching to the Finder), and so on. But Open and Save
dialogs lack many Finder features, and the fact remains that these are two distinct worlds. They operate differently, and they aren’t directly connected, even though you can use both simultaneously. How many times have you screamed at your computer, as it presented you with an Open dialog, “It’s right there, dummy – the thing I want to open is sitting right there in a Finder window, behind you! Can’t you see it?” No, alas, it can’t. True, these days, you can drag from the Finder into an Open or Save dialog to help tell it what folder it should be in; but with all the windows you usually have open, arranging to make that little move can be like solving a Sokoban puzzle.

Second, whatever happened to Boomerang, which was first mentioned in TidBITS in “Boomerang Makes Good” (1990-10-01)? For readers born since those days (and I worry that, by now, we might really have some), Boomerang was a brilliant hack that helped Open and Save dialogs remember where you’d opened and saved things from, so you could get back there again. It was bought and mutated and re-mutated (for some great ancient history on this topic, see Jerry Kindall’s “Get a Piece of the ACTION Files,” 1998-06-15), but it was essential to my Mac usage since, gosh, System 6. Slowly, over the years, Apple has realized that Boomerang’s functionality
might be a Good Thing and has incorporated some of it into the system; but it doesn’t really work very well (that’s putting it kindly). Sure, an Open or Save dialog contains a Recent Folders section in the pop-up menu, but you know something? I never know where the heck it’s getting that list from – most of the time, it doesn’t remind me of the places I’ve recently opened or saved in this application – and it’s usually a paltry two to five items in length. Does Apple think we’re a bunch of weenies who only open documents from two to five places?

Default Folder X (it’s a System Preferences pane with an application wrapped up inside it) can do a whole lot of things and has a whole lot of options; so any description threatens to be inadequate or confusing. Suffice it to say that it tries very hard to bridge the gap between Open and Save dialogs and the Finder, as well as adding some delightful extra navigational features. When an Open or Save dialog appears, Default Folder X notices this, and places a bar with five icons next to it. Each icon summons a menu: 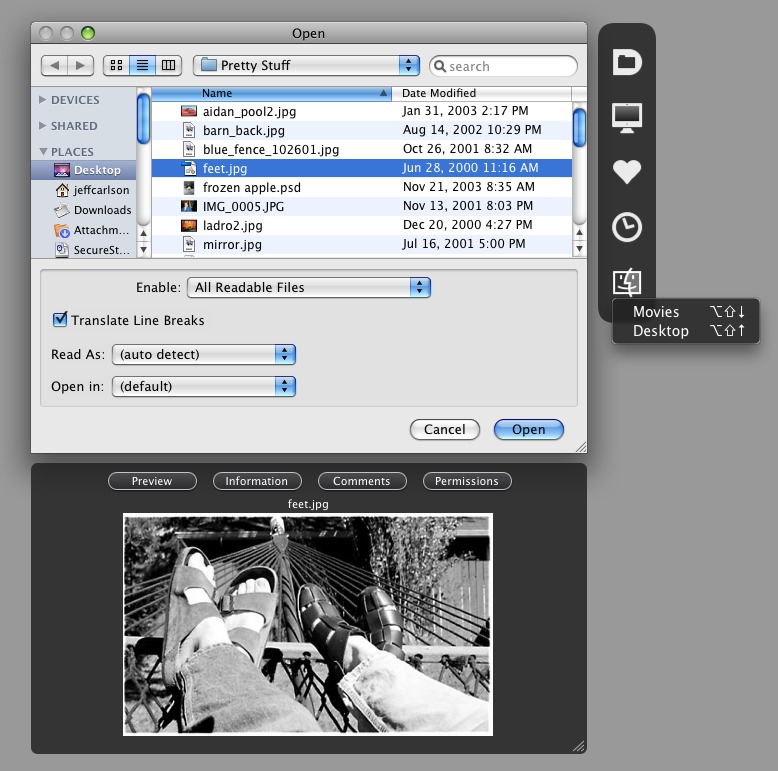 I should also emphasize Default Folder X’s “Boomerang” feature, since this, for me, is worth the whole price of admission. When an Open dialog opens, not only does it open to the folder you were last viewing, it selects the file you last opened. This is hugely important, not just because this is the file you are most likely to want to open again, but also because if you are processing a series of files, you now know instantly which file is next in the series. I’ve been using Open dialogs this way, as I said before, since System 6, and I find it hard to live without this feature.

Some people might not like Default Folder X’s new black-and-white semi-transparent windows, modeled after Leopard’s “heads-up display” window style; but I think that they, and the new Leopard animations as you summon a menu, are the bee’s knees. (That’s a term of strong approbation.) Despite the mind-boggling array of options in the preference pane, the Leopard version of Default Folder X feels clean and useful, simple and powerful. Nonetheless, I’m sure I’ve described Default Folder X and its value inadequately, so please check the St. Clair Web site for yourself (it is best simply to read the entire manual), and download and try this indispensable utility. To find it
working so beautifully on Leopard is a joy; I think you’ll agree. Default Folder X is $34.95, with a 30-day free trial download available.

Mac & macOS Productivity
Cookies & Privacy: We wish we were talking about chocolate-chip cookies here, but our Web site—like nearly all others—relies on a few minor digital cookies. Various laws around the world require us to tell you that fact, so consider yourself informed, if not nourished. By continuing to use this site, you agree to our use of these cookies. Cookie and Privacy Notice