Some people collect coins or stamps. Me, I collect utilities. Partly because I’ve written so much about things like maintenance, troubleshooting, and backups, and partly just because that’s the kind of guy I am, I have countless (OK, I counted: 130) programs on my main Mac that I’d categorize as utilities. Number 130, the one I installed most recently, is called CheckUp. It’s a multipurpose maintenance utility that monitors numerous aspects of your Mac’s configuration and performance and performs several useful housekeeping tasks. CheckUp may eventually enable me to reduce the overall size of my utility collection without sacrificing any features. But although version 1.0 shows
potential, it also has enough flaws that I won’t be deleting my other tools any time soon.

The most salient feature of CheckUp is its slick interface. The graphics are beautiful, transitions between tabs feature an optional 3D cube or move effect, and there’s plenty of eye candy at every turn. The interface is functional, too: almost anything the software does can be accomplished within two or three clicks – no tedious hierarchies to wade through or endless guessing about what might be where. Whatever else you can say about CheckUp, it’s certainly pleasant to look at and straightforward to use, at least in its main functions. 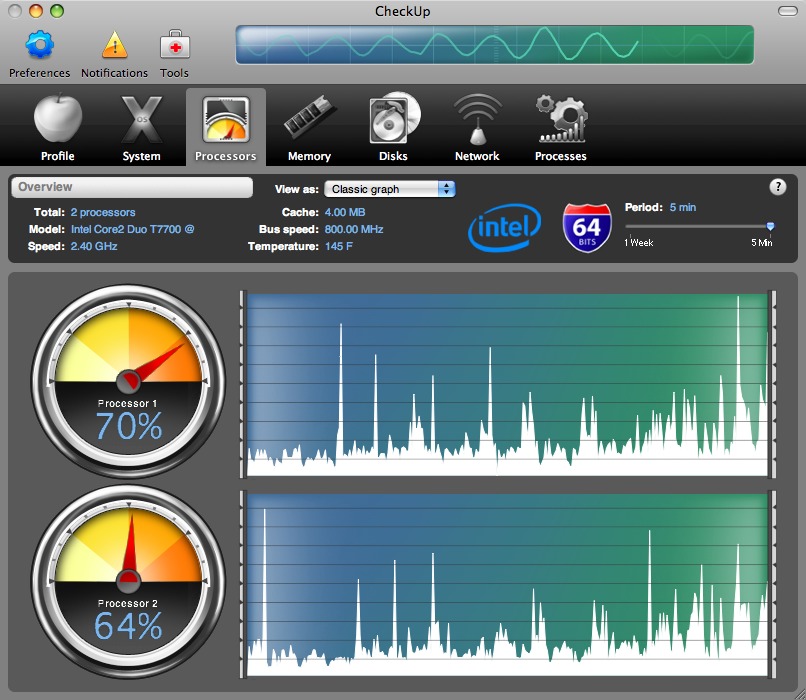 So what exactly does CheckUp do? For starters, it displays many of the same pieces of information as System Profiler, such as your Mac’s serial number, processor specs, and RAM configuration, plus your installed fonts, drivers, Internet plug-ins, preference panes, and applications. It also has most of the capabilities as Activity Monitor, showing real-time CPU, RAM, disk, and network usage (and with much spiffier graphics than Activity Monitor, I might add); it displays all your running processes, too, and allows you to pause or quit some of them. (The developer says that some processes can’t be quit or paused because doing so might be dangerous, and that a future version may have an “expert mode” in which this limitation
disappears. I find it annoying that CheckUp imposes this limitation arbitrarily and without explanation, especially since Activity Monitor will let you quit anything.)

CheckUp also gives you one-click access to a number of common commands that would otherwise require a trip to Terminal or Disk Utility – repairing disk permissions; running the daily, weekly, and monthly periodic maintenance scripts; updating prebinding; browsing hidden files and folders; and rebuilding the Spotlight database. It can warn you (even when CheckUp itself is not running) if your disk space becomes too low, your CPU or RAM usage gets too high, the inside of your Mac overheats, or any of several other potentially problematic conditions occurs.

Although I can think of many utilities (most of them free) that offer similar capabilities, CheckUp is unusual in providing this information not only for the Mac it’s running on but for remote Macs as well. The CheckUp license permits you to install a single copy of the application on two computers, so you can monitor your Mac and another Mac on your local network or anywhere on the Internet (assuming any intervening firewalls and routers have port 15550 open and have port forwarding configured if necessary). You can remotely monitor any Mac with a licensed copy of CheckUp (as long as the feature is turned on and you have the password), but you can see only one at a time. Even though app4mac offers volume discounts for purchases of five
or more units of CheckUp, each of which supports two Macs, you can’t add on licenses for individual computers at a reduced cost.

What’s Up, Doc? When it comes to documentation, CheckUp alternately delights and disappoints. On the plus side, the help windows that pop up when you click the “?” icons on various screens are among the most helpful I’ve ever read. They provide interesting history and background information, and unlike many applications’ contextual help, aren’t terse and patronizing. If you’re using CheckUp to browse hidden files and folders, you can not only see those items (/etc, /sbin, /var, and the like) but find out what many of them are for. And if you click the Descriptions of Processes button on the Processes tab, CheckUp displays a surprisingly readable, plain-English description of many of the ordinarily inscrutable background
processes that make up Mac OS X, such as mDNSResponder and ATSServer. 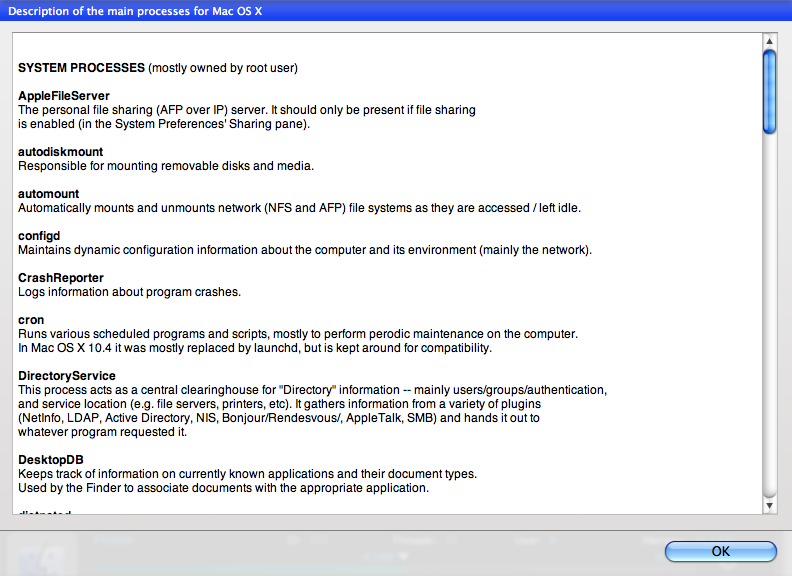 Unfortunately, these contextual help screens are the only documentation the program has – and they failed to provide me with the answers to several important questions about the program’s operation. CheckUp’s Help menu referred me to the Web-based FAQ, which had only a handful of questions and answers. When I went to app4mac’s Web site and clicked Documentation, and then CheckUp, nothing happened other than the page reloading. The developer said that documentation would appear in version 1.1, but that they have had very few support requests, implying that everyone understands the program well enough as it is. Sorry, but no. The program urgently needs real documentation. To illustrate the problem, let me mention a set of interface
oddities that left me scratching my head (and writing to the developer for help).

Un-Intel-ligent Design — A few features – or perhaps I should say “features” – require an Intel-based Mac. In each case, the design decisions are questionable at best. First, the checkbox Display the Temperature as Celsius Instead of Fahrenheit claims it’s available only if you have an Intel processor. I asked the developer what was so complicated about converting Fahrenheit to Celsius that a PowerPC processor couldn’t do it, and the reply was that the method they use to check temperatures doesn’t work at all on PowerPC-based Macs. Ah. So it’s not the scale that’s the problem but the process of reading the temperature itself. Of course, there are ways of reading the temperature on PowerPC-based Macs, but
apparently that would have required extra coding (and may appear in a future version).

So, assuming you have an Intel-based Mac, you can set an alert to appear when your Mac’s internal temperature exceeds a specified temperature for a specified period of time. That sounds useful, but there’s a catch. You can enter any temperature and any number of minutes, but what temperature, and what duration, should you enter? For all I know, maybe my Mac is running too hot if the temperature rises above 100 degrees Fahrenheit for 2 minutes, or maybe it’s perfectly fine running at 200 degrees for a half hour. Nothing in CheckUp’s interface, help system, or online FAQ gives users any clues here – which means the feature is effectively useless unless you can dig up that information on your own somewhere. (By the way, most Mac models
have more than one temperature sensor inside, each of which may have a different safe operating range; according to the developer, CheckUp monitors only the CPU temperature, though more options will appear in the future.)

The other “feature” requiring an Intel-based Mac is an oscilloscope animation that appears on the toolbar. The animation is merely ornamental, not functional. You can turn it off, but doing so requires you to relaunch the application. According to the developer, the reason it works only on Intel-based Macs is that it relies on OpenGL, which isn’t supported on the graphics cards included with some PowerPC-based Macs. But there are lots of other ways to do PowerPC-compatible animations – and the animation could just as easily have been left out altogether or replaced with a static graphic. The current implementation is silly.

More Issues — I experienced several other aggravations with CheckUp. When I sorted the list of running processes by name, for example, CheckUp put all the items beginning with uppercase letters first, followed by all the items with lowercase letters. So something like 100 items separated AppleSpell and autofsd. When I asked for an alert if disk space got too low, the alert appeared, all right – but not just for my startup disk; it warned me even when a mounted disk image had less than the threshold I’d specified, making the feature completely meaningless. (The developer says that greater control over disk space alerts is their most requested feature, and will be addressed in a future version.) And when I
clicked the Run Maintenance Scripts button, I expected that I’d be asked which one(s) I wanted to run – daily, weekly, or monthly – but CheckUp simply ran them all, without saying what it was about to do or asking for further confirmation. This, too, is on the developer’s list to address in the future.

A more serious problem was simply opening the program and keeping it running. In version 1.0, every time I launch CheckUp, I get an error message stating that the program has lost contact with the CheckUpAgent background process and therefore can’t run; it suggests that I try again, and if that doesn’t work, restart my Mac. If I immediately try to relaunch CheckUp, the message no longer appears, but then the next time I launch it, it comes back. The message also always appears if I put my computer to sleep while CheckUp is running and then wake it back up – in which case, clicking OK causes CheckUp to quit. The developer acknowledged this bug and sent me a beta version of CheckUp 1.0.1 (due out in early March 2008) that fixes this
problem. (Version 1.0.1 also fixes a number of other performance and stability problems.) But it does seem rather noteworthy that a maintenance utility – even version 1.0 – essentially crashes every time it’s launched. App4mac says that besides adding documentation, numerous other improvements are planned for CheckUp 1.1, currently scheduled for late April 2008.

Bottom Line — When I started using CheckUp, I was so impressed by its lovely and clear interface that I assumed I’d be very fond of it. The more I used it, the more those shiny happy feelings wore off. For one thing, I’m troubled by the fact that a maintenance utility has so many areas that are in need of maintenance! For another, the $49 price is hard to justify given that everything CheckUp does can also be done with free utilities (and in most cases, utilities built into Mac OS X). Sure, you might have to look at a command line now and then or at least put up with a less-elegant graphical presentation, but still… you’re not getting that much more for your money.

I also, of course, thought about CheckUp in terms of the maintenance tasks I recommend in “Take Control of Maintaining Your Mac.” Although CheckUp certainly performs several of the ongoing monitoring tasks I suggest, it won’t help you clear cruft out of your computer, back up your important files, keep your software up to date, clear caches, or do dozens of other things that are part of a sensible maintenance strategy. So while CheckUp is useful in some ways, you shouldn’t think of it as a complete maintenance utility.

CheckUp unquestionably shows promise, but version 1.0 is weak in almost every respect except its looks. I suspect that within a few versions, the serious bugs will be gone and enough new features will have been added to justify the price. For now, you’ll get better results – at a much lower cost – by learning to use Activity Monitor, downloading a free utility such as OnyX to serve as a front end for some of those Unix-y tasks, and reading a good book on maintenance.

CheckUp 1.0 is a 12.6 MB download. You can run it indefinitely as a trial version, with some features disabled, or buy a license to activate all the program’s features.