I’ve been using a Kensington SaddleBag to haul my laptop and associated crud around on trips for more years than I can remember. It’s a messenger-style bag with a padded pocket for a laptop, another large pocket for gear, and a zippered pocket with lots of small internal pockets for cables, pens, business cards, and coins. There are also two external pockets, one on the big flap that closes the bag, and another on the back that’s good for magazines. But what has always set the SaddleBag apart for me is a clever pocket on the outside flap that’s sized perfectly for airline boarding passes (which I’m always nervous about dropping otherwise) and the hidden backpack straps in the back
pocket. Although I usually rely on a nicely padded shoulder strap, there have been numerous times over the years where converting it to a backpack made for more comfortable carrying.

My beloved SaddleBag has been fraying a bit around the edges, but I’m not sufficiently vain that I’d ditch such a highly functional bag based on looks alone. But on our last trip, the unthinkable happened, and a major seam on the side gave way, threatening to spread various electronic gadgets over the floor of the plane. It was time for a new bag for my MacBook and gear (which likely weighs more than the MacBook itself).

My first step was to re-read Jeff Carlson’s excellent overview of how to choose a laptop case (check out “Buying a Laptop Bag,” 2004-04-05). But as much as I appreciated having all the possible features and pitfalls brought to my attention, it was also a bit frustrating, since I couldn’t lay my hands on bags from highly regarded manufacturers like Tom Bihn, Brenthaven, Crumpler, and Matias. If only it had been Macworld Expo time, since many of the bag manufacturers have booths at Macworld where you can poke and prod most of
their models, as Karen Anderson did this year (see “Macworld Expo Laptop Bag Roundup and Slideshow,” 2008-01-23).

Amusingly, the replacement bag topic came up on a mailing list I’m on just as I was starting my search, and a surprising number of people strongly recommended the Brenthaven Pro 15/17 Backpack, which is designed specifically for Apple’s 15-inch and 17-inch laptops. (Many bags, including my SaddleBag, can’t handle the 17-inch models).

This was about the time I started to freeze up on the decision. I’m one of those people who is congenitally incapable of purchasing something without knowing all the alternatives, options, and price points. It’s a curse, especially when it comes to something like a laptop bag, where there are hundreds of models, each differing in subtle ways that I could probably discern only in person, and ranging in price from $20 to $200. If I was ever forced to buy an iPod case, my brain would probably short-circuit.

That was when I had a flash of insight. I actively liked my Kensington SaddleBag, and the only reason I was in the market for a new bag was because of a seam ripping out. (And yes, it ripped in such a way that I wouldn’t have trusted myself to repair it with any guarantee of long-term success.) So I popped over to Kensington’s Web site, where I discovered that they still sell the SaddleBag, along with the SaddleBag Pro, which features a bottom-mounted drawer for cables and other junk. Some random searching around the Web also revealed the existence of a SaddleBag Ultra, which still exists on Kensington’s Web site, but oddly isn’t
linked from the main navigation. The SaddleBag Ultra seems almost identical to the original SaddleBag, but with the addition of a webbed pocket on one side for a water bottle, which would be great, since I always disliked putting water bottles inside my SaddleBag with my electronics. 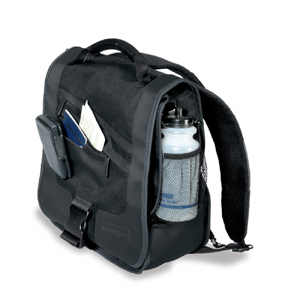 So why not just buy basically the same bag again? Sure, I wasn’t expanding my horizons, but we’re talking a laptop bag here, not some new hobby for my non-existent free time. All my familiar spots for storing different bits of gear would still be there, and years of muscle memory for opening and closing the bag and pulling things out wouldn’t be wasted. But what clinched my decision to buy the SaddleBag Ultra was the discovery, via Amazon.com, that it was readily available for between $30 and $40. Compared to what you can pay for a laptop bag, that’s practically free.

It arrived a few days ago, and although I haven’t had a trip since, I fully enjoyed transferring everything I regularly carry from the old bag to the equivalent spot in the new one. The handle lacks the foam pad from the previous model, but it’s similarly soft, and I don’t anticipate it being a problem. The backpack straps on the new one are much more padded, though, which will be highly welcome. I can’t compare the shoulder straps, since I have an extra-padded one that I bought separately and enjoy every time I use it. Some of the smaller zippered pockets have a slightly different configuration, with some being better and others worse, but all in all, it’s basically the same old bag. I can’t say if it’s the perfect bag for you, but
it’s inexpensive and meets my needs well.

And that’s what I now know I really wanted: the same old bag, slightly updated and improved. This may be a sign that I’m getting older, but luckily, since I am getting older, I don’t care.

Opinion Staff Blogs
Cookies & Privacy: We wish we were talking about chocolate-chip cookies here, but our Web site—like nearly all others—relies on a few minor digital cookies. Various laws around the world require us to tell you that fact, so consider yourself informed, if not nourished. By continuing to use this site, you agree to our use of these cookies. Cookie and Privacy Notice