It’s pointless to talk about cell phones or smartphones without bringing up the 800-pound gorilla in the room, so I’ll get that out of the way right now and say that the $99 Palm Centro is no iPhone. But at a fraction of the price of Apple’s just-announced iPhone 3G, Palm’s latest smartphone is a slim and capable update of their PDA line with one key advantage over the iPhone for some users – an actual keyboard.

Available already on the AT&T and Sprint wireless networks, and newly available for Verizon Wireless, the Centro joins the Palm Treo family of cell phones as a slimmer, sleeker entry, one we can more reasonably imagine carrying around for daily use. It’s been a long time since the Motorola MicroTAC Elite seemed svelte, and many smartphones are clearly eating too much and not getting enough exercise. By contrast, the Centro is narrow and easy to grip, similar in width to Motorola’s more recent offerings, such as the RAZR and ROKR. 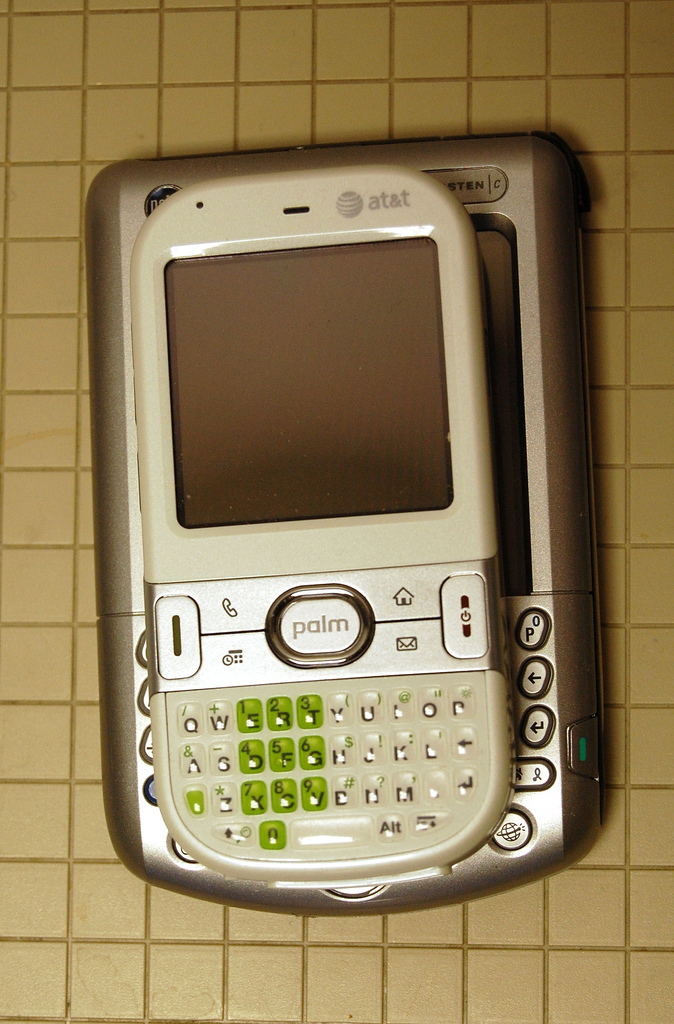 The Keyboard Is Where It’s At — The only drawback to the Centro’s narrower design is that it sports the smallest keyboard Palm has yet offered on its handhelds. Having used a Palm Tungsten C for a while, I was used to the idea of teensy keys placed close together, but at a full inch wider than the Centro, the Tungsten has room for bigger, much more widely spaced keys. The difference is clear with sustained typing; only those with relatively small hands will be comfortable with much typing on the Centro. Even the extra fifth of an inch (about half a centimeter) of width on the Treo seems to make a difference in typing ease. 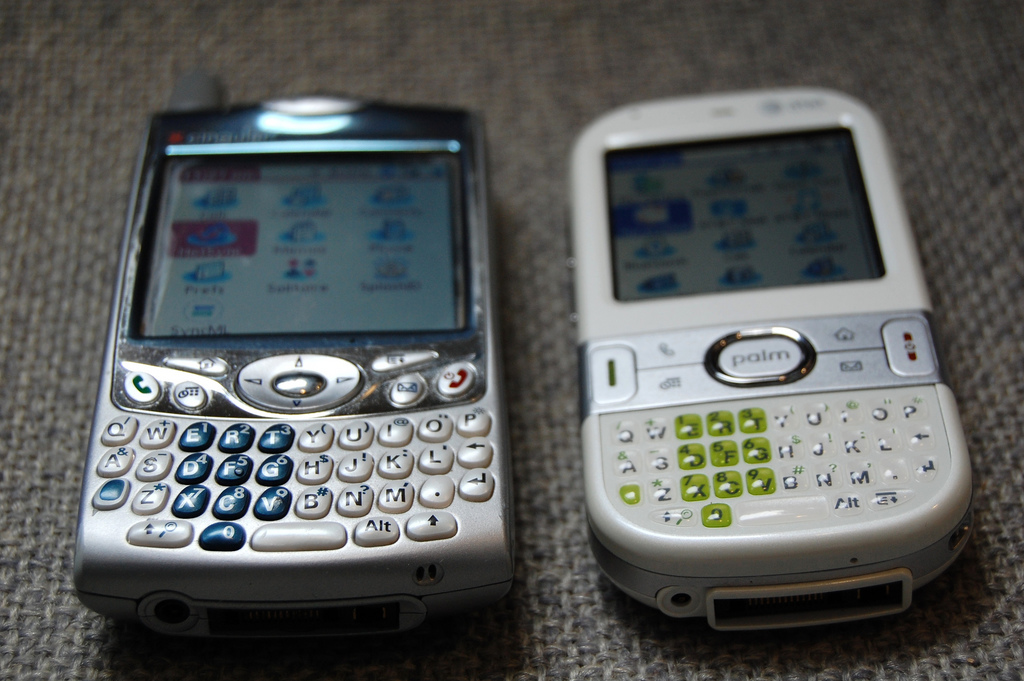 But, if you have relatively small hands or you’re dexterous with your big fingers, having a keyboard makes all the difference when composing email and text messages. I found that, after a few minutes, I was pretty adept at punching out a few sentences at a time – also true with the iPhone, but even with the iPhone’s adaptive typing recognition, which guesses what you meant to type even if you miss every third letter, lots of users have said they prefer a real keyboard.

Purely Palm — Another key advantage for the Centro is its familiarity for those who’ve used Palm handhelds, often for many years or across several models. Detractors say the gradually updated and incrementally refined user interface has fallen way behind, but I have to say that the Centro’s Palm OS offers a clean simplicity that shouldn’t be underestimated.

Anyone who used the original Palm user interface will immediately recognize what it’s evolved into; there are more icons on the Applications screen, but a few iterations ago, Palm made them sleeker and colorized them, as well as grouping them into (optional) categories for easy navigation.

As with other recent Palm handhelds, the Centro has an idiosyncratic relationship with Mac OS X. The Palm Desktop software hasn’t been updated in years, but if you want to use it to manage syncing of your contacts, calendar, and other info between handheld and Mac, you can. Or, Palm’s HotSync software can now collaborate with iSync to allow users to stick with Apple’s Address Book and iCal. We suspect most Mac users will take this approach, especially if they don’t have a long-standing Palm habit.

(A more modern and feature-rich sync approach comes from Mark/Space’s $39.95 The Missing Sync for Palm OS, though I’ve personally found that the included Palm HotSync software has met my needs. See Jeff Carlson’s “Missing Sync for Palm OS 5.0 Modernizes Palm Interaction” (2005-11-07) for more details on what the software can do, even though that article covers an older version.)

The Centro includes a Web browser and email client; neither is a spectacular example of its genre, but both are capable as handheld applications go. The Web browser can display graphics but not much in the way of page layout; Palm Web browsing hasn’t changed much in the several years it’s been around, though the Blazer browser is surprisingly adept at displaying a variety of pages.

No Surprises — There’s not much else to say, if you’re familiar with using cell phones and you’re familiar with using Palm handhelds. (I suspect relatively few users are jumping on the Palm bandwagon for the first time by picking up a smartphone, though certainly some are.) The audio quality is fine, the reception strength is reasonable even in fringe areas (easy to test in my basement, where the iPhone and my Verizon Wireless phone also have trouble), and the battery lasts one to three days of off-and-on use. (You’ll probably want to charge daily.)

What’s the best feature of the Palm Centro? I think it’s the capability to use the Palm OS version of SlingPlayer Mobile, the handheld version of Sling Media’s placeshifting video viewing software. With my Slingbox hooked to my TiVo, I was pleasantly surprised at how watchable both live TV and pre-recorded programs were. The delay in sending remote-control signals from the Centro to the TiVo via cellular connection wasn’t even significantly worse than using Sling’s desktop software via broadband. 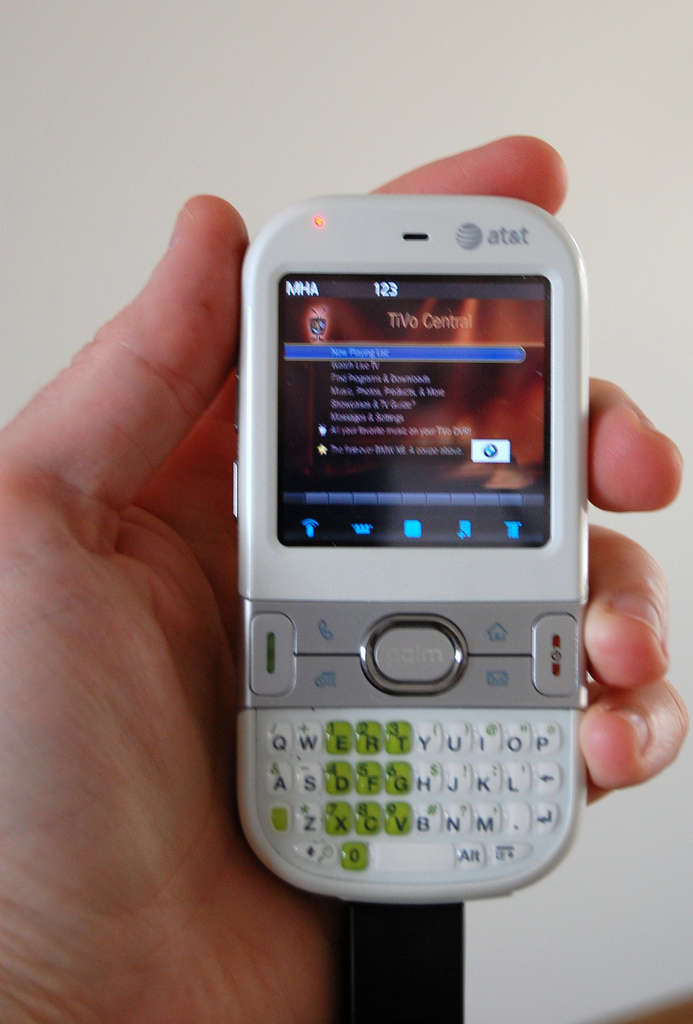 Do You Want One? There’s no question that the Centro is a capable phone, and a worthy successor to a decade of Palm handhelds. In a world with no iPhone, Palm’s Centro and Treo smartphones would be the clear alternative to the quirky Windows Mobile and the walled garden of RIM’s BlackBerry. But with Apple’s category-killer in the game, the Centro will be most attractive to those with an attachment to the Palm way of life and those who just need a small dose of smartphone, i.e., those for whom the iPhone is overpriced overkill.

The Centro is most attractive of all right now, with a $50 rebate making the phone $49 instead of $99 through 06-Jul-08. Voice (450 minutes) and data plans start at about $75 per month, though there are slight differences between the three carriers.

Networking Productivity
Cookies & Privacy: We wish we were talking about chocolate-chip cookies here, but our Web site—like nearly all others—relies on a few minor digital cookies. Various laws around the world require us to tell you that fact, so consider yourself informed, if not nourished. By continuing to use this site, you agree to our use of these cookies. Cookie and Privacy Notice