Apple today released General Support Update 2009-001. According to the predictably terse release notes, the 401.9 MB download “provides various usability and compatibility improvements and fixes several minor issues.” This is the only information we have at this time as to what this update may do; there is no word on whether it affects certain aspects of the system, the system as a whole, or particular Apple-installed applications. Nor are we told what improvements it includes or what issues it fixes. Some have speculated that it could in fact be a new version of Mac OS X, but we’re not sure, since the About This Mac window no longer shows version information after you apply the update. 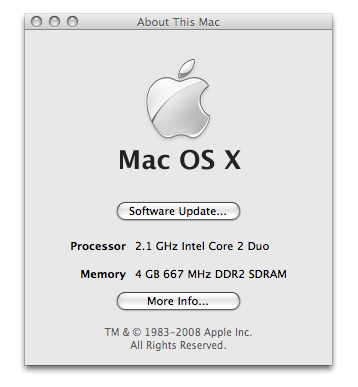 Apple describes the update as “Recommended for all users,” so we suggest that everyone obediently download and install it like good little boys and girls, and leave the thinking to the higher life forms at Apple. The update is available via Software Update and should be on the Apple Support Downloads page later today.

April Fools Just for Fun Mac & macOS
Cookies & Privacy: We wish we were talking about chocolate-chip cookies here, but our Web site—like nearly all others—relies on a few minor digital cookies. Various laws around the world require us to tell you that fact, so consider yourself informed, if not nourished. By continuing to use this site, you agree to our use of these cookies. Cookie and Privacy Notice