Ah, it seems like only yesterday that Apple made my just-released book on .Mac obsolete with their unexpected introduction of MobileMe (see “MobileMe Oh My (or, Apple Breaks Record in Making My Book Obsolete),” 2008-06-09). But clearly, Apple has continued to watch me carefully, because now, less than a week after we released version 1.1 of “Take Control of MobileMe,” the company has begun offering their free MobileMe iDisk app for the iPhone and iPod touch. We knew it was coming eventually, of course, since Apple announced it back in June, but we had no idea exactly when it
would drop and didn’t want to hold off publication of the updated book indefinitely. (But don’t worry, we have readers covered, as I explain later.)

My inconvenience aside, I’m delighted to see the app, and I can report from one day’s use that it appears to do what it promises to do quite well.

The app is so simple, straightforward, and obvious, it’s hard to imagine why we haven’t had something like it all along. It lets you view the files on your iDisk (or another user’s public folder) from your mobile device – and share your iDisk-hosted files with others by emailing links to the files, much like you can do from the MobileMe Web site (see “Apple Adds iDisk Sharing Feature to MobileMe,” 2009-02-13). The app requires an iPhone or iPod touch (any model) with iPhone OS 3.0 or higher as well as, naturally, a MobileMe membership.

The first time you use the app, it asks for your MobileMe member name and password. It then shows a list of all the folders on your iDisk, and you can navigate through the hierarchy as in any other iPhone app. 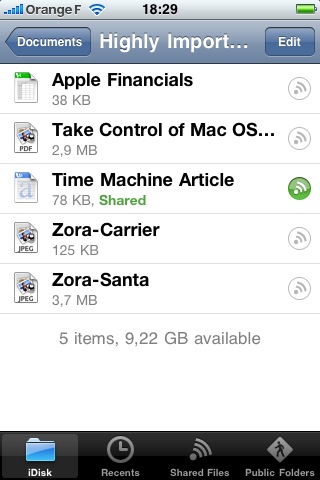 Tap the name of any file to download and display it. The app supports all the usual file types, such as PDF, text, rich text, Microsoft Office, iWork ’09, and most popular audio, video, and graphics formats.

As you download files, the app keeps cached copies so you can view them repeatedly without waiting for them to download again. The cache size is adjustable from 50 to 200 MB. Unfortunately, caching doesn’t apply to audio and video files. Those are always streamed from your iDisk rather than being copied to your mobile device.

To share a file, you tap a sharing icon, enter one or more email addresses, and optionally change the subject and enter a message (just as in the mobile Mail app). To change the expiration date (1 month ahead by default) or add password protection, tap the Options field, make the desired changes, and then tap Email Link at the top.

The iDisk app also enables you to delete files, view any user’s public folder (as well as saving a list of frequently accessed public folders), view all your shared files (regardless of where they are on your iDisk), and see all recently viewed files.

Unfortunately, the iDisk app doesn’t let you move files to other locations on your iDisk, rename them, or edit them – not even simple text files. If you need any of these additional features, or the option to access other WebDAV servers, you can try any of numerous third-party apps that offer iDisk access. The downside to most third-party iDisk apps is that they require any file you share to first be downloaded to your iPhone or iPod touch and then sent as an attachment (so you must wait for it to transfer twice!). In other cases, you can email a link, but only to a file in your public folder, or to a file that’s been uploaded to a third-party server. By contrast, Apple’s iDisk app lets you email a link to any file already on your iDisk
(whether in your public folder or not) – without having to download it to your iPhone/iPod touch at all.

Of course, I’ve been doing the same thing for more than a year already, thanks to SugarSync, which I described in “SugarSync Sweetens Online Syncing” (2008-08-30). Although SugarSync works just fine for what it does, it doesn’t connect to an iDisk (relying instead on the developer’s own online storage system). For those who store files on their iDisk for easy sharing and syncing between Macs, this new iPhone app is going to be immensely useful.

As for the now-outdated book: Since we knew this app was coming sooner or later, we have a plan in place to update the book with the latest information. In fact, I’ve already written the new material (some of which I excerpted in this article), and I’ve put it on the Web for owners of “Take Control of MobileMe,” version 1.1. Simply click the Check for Updates button on the first page of the PDF and then click the Blog tab – it’s all in there, and we’ll create a revised PDF as soon as our schedule permits.