I’ve used iCal off and on to manage my schedule on my Mac. More off than on, honestly, since my day-to-day workplace had for years been using Oracle Calendar, an enterprise calendaring tool that doesn’t, shall we say, play well with others. When I’ve used iCal, it has generally been to access schedule info that’s made available online in iCal-friendly form for Apple’s Worldwide Developers Conference or a big science fiction convention, and to synchronize such calendars with my iPhone.

Lately, though, iCal took center stage as the best tool for accessing my new Microsoft Exchange calendar at work. I’ll leave for another day the question of why I prefer iCal over Microsoft’s own Entourage as a calendar client, but having made that choice, I wanted to make my calendar shine.

Enter Today, a straightforward and inexpensive Mac application from Second Gear Software whose simple goal is to show an always-available view of your current day. It’s a more-elegant take on the concept attempted by My Day, the Microsoft tool I’ve spent more time trying to get rid of than any other piece of software.

The $21.95 Today (also available as a five-user family pack for $34.95) provides a single, resizable window. You can make it float in front of everything else or not, and make it transparent or not, and other than that, it displays today’s appointments and tasks in a convenient, at-a-glance format.

I’ve found Today to be a great complement to iCal, which I prefer to keep in a weekly view so I can see what’s coming up beyond today, and so I can react to invitations for upcoming events. Today shows me both my day at a glance and my tasks, either just those due today or upcoming items as well.

Honestly, I don’t make effective use of task managers or to-do tools. To give you an idea, Today dutifully pulled up old tasks I’d synchronized from my last Palm handheld some four years ago. (At least I don’t see any holdovers from my Newton days. But if I did, Today would have me covered.) Tasks appear in a drawer that can be displayed, or hidden, with a single click.

The interface for Today is pleasingly simple and intuitive. Click the right or left arrow to move a day at a time forward or back, click the dot between them to see today’s schedule no matter how far you’ve wandered, or click the calendar icon to bring up a familiar picker in which you can skip around by month to find the date you want. All-day items are shown at the top, followed by entries with specific times. Hover the mouse pointer over an entry’s title, whether or not Today is the frontmost application, and it shows the location of the meeting, something I wish iCal would do. 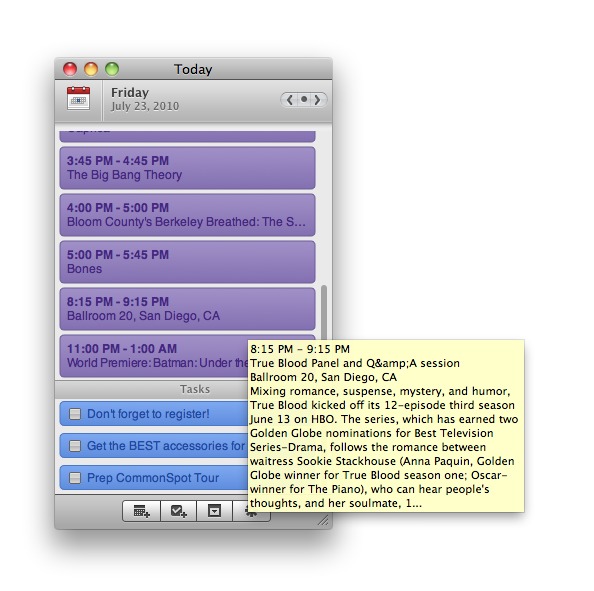 As with iCal, Today lets you specify which of your calendars to display events from. This is important for my needs, since sometimes I want to see my Facebook events alongside my work and personal calendar entries, and sometimes I want to see a co-worker’s calendar alongside mine, and sometimes I don’t. The one glitch here, and it’s one over which Today’s developers have no control, is that all of the primary individual (or conference room, etc.) calendars visible in iCal via Microsoft Exchange connections are called
“Calendar.” To tell the difference between mine, and a co-worker’s, and another co-worker’s, I need to take careful note of the order in which they appear, and the matching colors. The good news is: they do appear in the same order, and color, in iCal and in Today, so this approach works. And, of course, the average user without lots of other people’s Exchange calendars to choose from will never see this issue.

If you’re using BusyMac’s BusyCal application instead of iCal, Today will still work for you. Since both iCal and BusyCal talk to Mac OS X’s underlying calendar capabilities, BusyCal and Today get along like champs.

Of course, Today and BusyCal are just two of many third-party tools that play in the iCal sandbox, and Matt Neuburg recently took a look at some others (see “Freeware Coolness Crushes iCal Shortcoming,” 4 August 2010).

Second Gear’s Web site recently hinted that an upcoming release of Today 2.5 will come with a price increase to $24.95 for individual and $39.95 for family-pack licenses. The software is available for a 14-day, full-featured trial period, but it didn’t take me two weeks to decide to buy.