After talking about new iPods, iOS updates, and iTunes 10 at Apple’s media event last week, Steve Jobs got a laugh from the audience by swapping his traditional “One more thing…” slide for one reading “One more hobby…,” a reference to his oft-quoted comment that the company’s Apple TV set-top box was languishing because it wasn’t a mainstream product.

Well, the market has changed since Apple introduced the original Apple TV in September 2006. Apple’s TV show and movie sales and rental businesses have taken off via iTunes on the desktop, as well as on the iPhone, iPod touch, and iPad, and countless set-top devices compete for space in the living room, offering streaming video from Netflix and YouTube, hard drive storage for purchased or downloaded video, and more.

Citing customer demand for professionally produced content (Hollywood movies and TV shows, rather than a steady stream of cute cat videos), in high definition, for less money, without having to worry about configuring a computer, managing storage space, or syncing to a computer, Apple has tossed a new, second-generation Apple TV into the mix. Calling it “silent, cool, and small,” to fit customer demands, Jobs says the new $99 Apple TV is a quarter the size of the unit it replaces. Like the previous Apple TV, the power supply is built in rather than provided as an external brick. 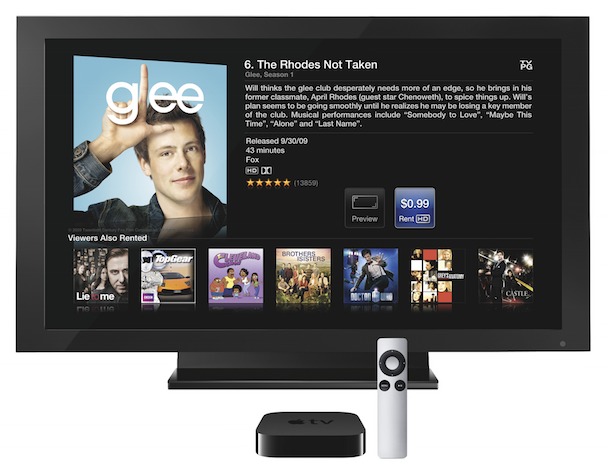 Apple’s new set-top box moves entirely away from long-term storage and ownership of content, offering only rentals of TV shows and movies, streamed rather than played from an internal hard drive, all in 720p HD at 30 frames per second, when available. The device, which we’re told runs a modified version of iOS on its Apple A4 CPU, sports an HDMI port to carry video and sound to your television (the only video-out option); an optical audio port to connect to fancier audio gear; 802.11n Wi-Fi that’s compatible with 802.11a, b, and g
networks as well; and a 10/100Base-T wired Ethernet port. It also comes with an aluminum Apple Remote, which controls the Apple TV via infrared.

There’s also a mini-USB port for “service and support,” which enterprising developers have used in the previous Apple TV model to extend the box’s functionality. With the shift to iOS, it’s unclear whether the Apple TV will be as hackable.

Content will be available with 99-cent rentals of commercial-free TV shows, available initially from just the FOX and ABC networks. (Jobs says he hopes the other U.S. broadcast networks will get on board, and we suspect they will eventually, unless they’re too scared of Apple gaining the kind of control over TV viewership that it enjoys in the digital music field.) TV rentals must be watched within 30 days of paying for them, just like movie rentals, but once you’ve started watching, TV shows expire after 48 hours, an extra day compared to the 24-hour window available for movies.

New release movie rentals, which are available on the same day as the title’s DVD release, cost $4.99 for HD quality, or $3.99 for standard definition (SD) quality. After the newness has worn off, movies drop in price to $3.99 for HD and $2.99 for SD rentals.

As with many other set-top devices already on the market, the new Apple TV will also offer streaming movies from the Netflix Watch Instantly library. And if you want the cute cat videos, you can watch any YouTube content, as well as photos and videos from Flickr and MobileMe.

We think one of the most compelling features is the Apple TV’s use of AirPlay, Apple’s new enhanced version of AirTunes. That technology not only enables the Apple TV to stream media from a Mac or Windows computer running iTunes 10, it also makes it possible to stream content stored on another nearby iOS device, such as an iPad. To borrow Jobs’s example, you could watch part of a movie on your iPad on a plane, and when you get home, tap a new AirPlay button on the iPad to begin streaming the movie to your television.

The new Apple TV will ship toward the end of September 2010, and can be pre-ordered immediately on the U.S. Apple online store for $99. The company says iTunes TV show rentals and Netflix streaming are available only in the United States, and movie rentals are available in Australia, Canada, France, Germany, Ireland, New Zealand, and the UK, as well. Apple hasn’t yet said when the device will be for sale outside the United States, and licensing restrictions on video content make that unlikely to be clarified any time soon.

We wish we could speculate that Apple would offer a software update to existing Apple TV devices to provide the new functionality to old hardware, but as the new Apple TV involves a different operating system on completely different hardware, we’d be astonished if Apple even attempted it. The low cost of entry, at $99 compared to the previous hardware’s $229 price tag (it was originally released at $299), makes it attractive enough to buy a brand new one. No doubt lots of first-generation Apple TVs will be relegated to secondary TVs. (Just fill its hard drive up with “Dora the Explorer” and little Susie will love it.)