Just think about accessing your email program. You might do so via an icon in the Dock, or via LaunchBar, or some other common mechanism. But if your email program is just a bookmark to a Web page, any of those methods will create a new Gmail tab in your browser, and you’ll get another new Gmail tab every time you click it (this isn’t universally true; Safari 5 sometimes reuses a tab, and Firefox 4 now features app tabs; see “Firefox 4 Improves, But Not Radically,” 2 April 2011). So unless you switch to Gmail by switching to your Web browser and then finding the open Gmail tab, you’ll be constantly opening and closing Gmail tabs, which is an annoying waste of time.

One solution is a site-specific browser like Fluid (which uses WebKit, the technology Safari is based on) or WebRunner (which replaces Prism and essentially encapsulates Firefox). These can effectively turn any Web site into a standalone application that appears in your Dock and doesn’t mingle with other Web pages. But my experience with both is that while they work for some sites, there are plenty of sites where they either don’t work or are clumsy to use for a variety of reasons, including authentication issues, tab-handling, lack of support for plug-ins or extensions, and so on.

Prepare for Takeoff — Luckily, there’s a much better solution: Mailplane, a highly site-specific browser that’s just for Gmail. Mailplane is based on WebKit, like Safari, but developer Ruben Bakker of Uncomplex has done a truly amazing job of turning what is essentially a Web browser into a real Macintosh application.

Uncomplex has a page comparing Mailplane to using Gmail in a browser, and I won’t list out the many ways in which Mailplane outdoes the browser experience. But I do want to touch on those that I’ve found to be a big win in my everyday use.

Most important is of course the separation of Gmail from the rest of my browsers and tabs. That lets me map the F3 key on my keyboard to Mailplane, something I’ve done for my email program for more years than I can remember. And as a real desktop application, Mailplane can set itself as the default mail application on the Mac, accepting clicks on mailto links and other actions that would normally be sent to Mail or Eudora or whatever.

I also like being able to drag files onto the Mailplane window or its icon in the Dock to attach them to a message (Google has now made it possible to attach files via drag-and-drop into the Gmail window in Web browsers, but that wasn’t true when I started using Mailplane).

Mailplane simplifies certain things that are tough in browsers, such as maintaining multiple accounts. Until August 2010, in a browser, if you wanted to switch among multiple Gmail accounts, you had to log out of the current one and log into the second one, reversing the process to go back. Although Google now allows multiple account sign-in, the process is still clumsier than with Mailplane, which enables quick switching among accounts with a simple double-click in the Accounts drawer.

Because I test a lot of software and report on behavior to developers and designers, I adore Mailplane’s built-in screenshot capability. While writing a message, I can click the Screenshot button in Mailplane’s toolbar and take a screenshot of a selection, a window, or an entire screen. Once I’ve made the appropriate selection, Mailplane takes the screenshot and attaches it to the message with no more interaction (and I don’t have to throw out any temporary screenshot files later). 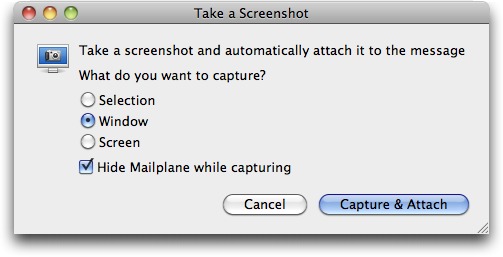 Although Mailplane provides Mac-like keyboard shortcuts for a slew of Gmail actions, I’ve intentionally avoided them in favor of Gmail’s own internal shortcuts (press ? to see a cheat sheet of all of them, and check out Lifehacker’s “Become a Gmail Master Redux” article for suggestions on using them). That’s because, as much as I like Mailplane, I’m a keyboard-focused user, and I don’t want to become dependent on Mailplane’s
version of Gmail’s keyboard shortcuts for those times when I do use Gmail in a Web browser. But I could see some people really appreciating the familiar keyboard shortcuts.

Mailplane also integrates with Growl, notifying me of new messages as they come in. But it’s not just any message that comes in; Mailplane triggers Growl notifications only for messages that hit my Priority Inbox, so the tons of automated messages and mailing list discussions that flow into my mailbox don’t bother me.

Finally, and this is an improvement over only the generic site-specific browsers, Mailplane supports a few Gmail plug-ins: Rapportive, TrueNew, and 0Boxer. Rapportive is wonderful, since it replaces Gmail’s ads with information about your email correspondents (see “Rapportive Plug-in Replaces Gmail Ads with Sender Info,” 27 March 2010). TrueNew is relatively trivial, but shows the unread count for your Inbox and, separately, the number of new messages since your last interaction with your Inbox (I’m not sure this is working since Gmail’s last minor
revision). And 0Boxer is essentially a game where you score points by reading and replying to email; you can compare yourself to friends or to the world at large. It was amusing briefly, but after a while, it wasn’t worth the interface space at the top of the window.

While it’s great that Mailplane supports these plug-ins, plug-in support is actually something that points toward using Gmail in a normal browser, and mostly in Firefox or Chrome. That’s because there are a bunch more Gmail-based Web apps and plug-ins that work only in browsers. Of course, many of them attempt to provide features that Mailplane already does better, but there are some I’d love to use.

For instance, there’s Boomerang, which lets you schedule when messages should be sent and can automatically remind you if you haven’t heard back from someone in a couple of days. (Note that Mailplane has now added support for Boomerang; see “Mailplane 2.3.1 Adds Support for Boomerang for Gmail,” 11 April 2011.) And ActiveInbox gives Gmail a Getting Things Done-style makeover. Then there’s socialGmail, a Chrome-only plug-in that displays avatar photos next to senders in Gmail message lists. And
although CloudMagic currently requires that you allow IMAP access to your All Mail label (which causes normal IMAP clients to download a lot of unnecessary duplicates), it’s an interesting Gmail plug-in that provides instant searching no matter where you are in the Gmail interface. I could go on, but I think you get the point — there are ways of extending Gmail that just aren’t available until and unless Uncomplex can build them into Mailplane.

In the end, despite my occasional yearning for one of these Web apps or plug-ins, Mailplane provides so many features that I rely on every day that I never end up using Gmail in a normal Web browser for more than testing. It’s well worth the $24.95 purchase if you use Gmail on a Mac.

What about Sparrow? — There’s been some excited chatter about a new Gmail-focused application called Sparrow. I’ve looked at Sparrow, and while I’m tremendously happy to see Mac developers building a pretty interface on top of Gmail, Sparrow simply doesn’t act enough like Gmail to make it worthwhile for me. That may change as the program evolves, but for now I have these problems with Sparrow.

In short, I think Sparrow is simply not sufficiently baked yet for anything but minimal email use. Nonetheless, I have high hopes for it, since it’s the only desktop application I’ve seen yet that acknowledges and attempts to replicate Gmail’s innovations.

Gmail on iOS — One thing I haven’t mentioned much is using Gmail on the iOS devices, in part because although I do occasionally read email on my iPhone, I don’t do it much. The main thing to consider is that when you’re using an iOS device, you can access Gmail either using the Mail app using Gmail’s IMAP interface, or using Gmail’s mobile Web interface using Safari. There are also a number of apps, such as Mailroom, iGmail, and MultiG, that encapsulate Gmail’s mobile Web interface in a standalone app, much like Mailplane does on the Mac. There’s nothing wrong with them, but the few features they add — like multiple account support — aren’t generally those that I need on my iPhone or iPad.

Although I’ve set up Apple’s Mail app to access my Gmail, since it’s a standard IMAP client with none of Gmail’s innovations (like conversation view, great searching, and so on), for those times when I do want to access Gmail on my iPhone or iPad, I always go to the mobile Web interface.

Google has done a bang-up job for both the iPad and iPhone/iPod touch, creating custom interfaces that react well to the available screen size while providing most of the standard features you’re used to having in Gmail. In particular, I appreciate the conversation view, since it turns reading threads into a simple scroll action, and the capability to search across all my email, since I often look for directions or an address from my email when I realize I don’t quite know where I’m going while driving. The iPhone/iPod touch version of the interface uses multiple screens, one for listing messages and another for displaying them, so there’s a bit more back and forth than with the iPad interface, which can display the message list
at the same time as a message. 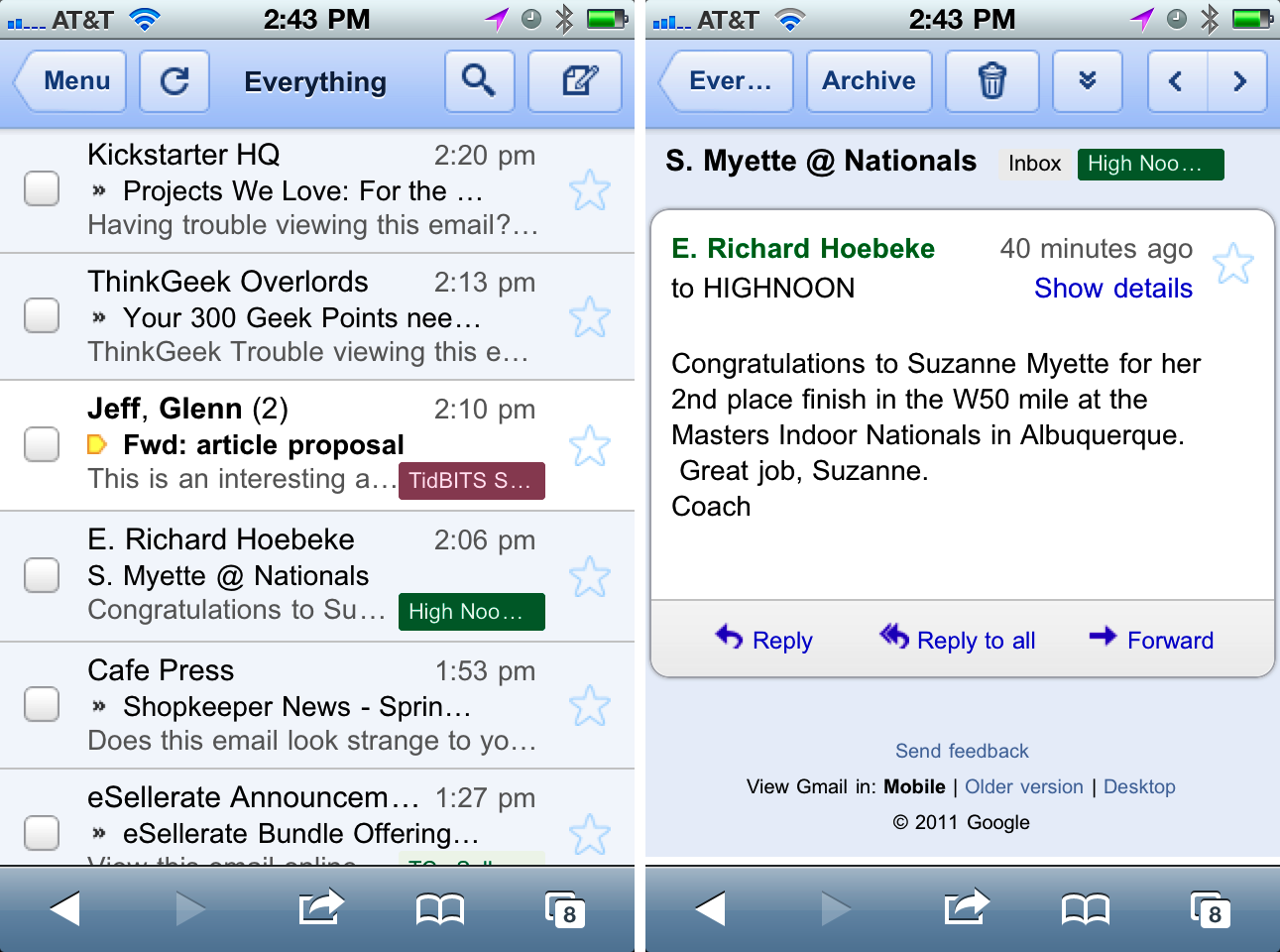 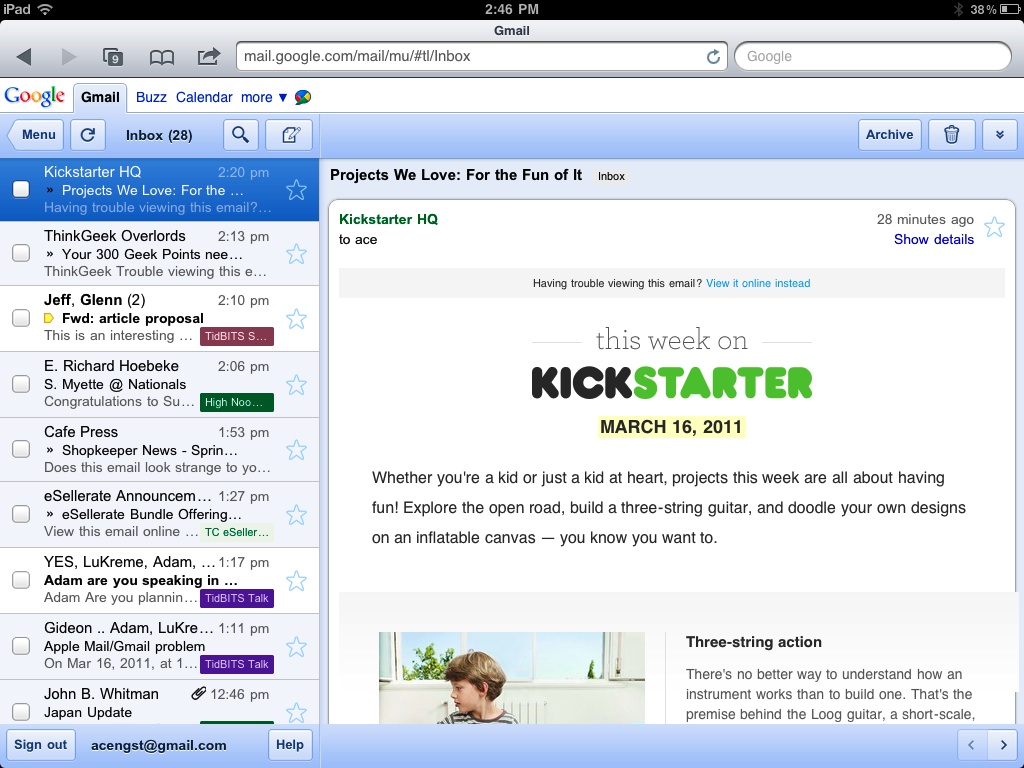 Honestly, though, the main thing I do with Gmail’s mobile clients is read messages, marking them either as unread or starred for dealing with later once I’m back on the Mac with a real keyboard. I haven’t tried doing all my email on the iPad with an external keyboard; it should be pretty reasonable, but I haven’t yet had the need.

Getting into the Gmail Mindset — I won’t pretend that switching to Gmail is a trivial step to take, but if you don’t get bogged down in the morass of moving all your existing email and contacts into Gmail and replicating every system you had in your previous email client, you can turn Gmail into a lean, mean, email machine with a little help from Mailplane. I’m not just saying that, I’m living it, and I get one heck of a lot of email. So while I won’t pretend that Gmail is the right email solution for everyone, I have no trouble recommending that anyone who is not happy with their current setup give it a try.

All About Gmail Networking Zen and the Art of Gmail

Comments About Zen and the Art of Gmail, Part 4: Mailplane