The history of Mac development is not like a plant that grows and branches and produces leaves and flowers. It’s more like a series of rubber bands that get stretched to the breaking point and eventually snap. The 68000 processor was dropped; then the whole 68K processor family was superseded by Macs using PowerPC processors. Snap! When Mac OS X came along, all applications had to be rewritten, except for the lucky ones that could operate correctly inside the Classic emulator. Snap! When Macs started relying on Intel processors, support for Classic was dropped. Snap!

Now it was PowerPC that was emulated, using Rosetta. In Snow Leopard, the first Intel-only version of Mac OS X, Rosetta wasn’t installed by default; it would be downloaded and installed automatically the first time a PowerPC application launched, but the hand was already writing its ominous message on the wall. The rumor, which has become as loud as a roar, is that Mac OS X Lion will not support Rosetta. Snap!

No bad thing will happen to your Mac the day Lion goes final. Your current hardware won’t refuse to boot. Your current system won’t stop working. Your favorite applications will still be your favorite applications. But suppose, just for the sake of argument, that you become interested in upgrading to Lion. And suppose, for the sake of even further argument, that Lion lacks Rosetta. What might the loss of Rosetta mean to you?

System Profiler displays its information in three categories, listed in a pane down the right side of its window: Hardware, Network, and Software. For the fullest display of categories, choose View > Full Profile. Now, under Software (click the triangle to open it if necessary), select Applications.

Now go make yourself another espresso from your handy-dandy Pavoni Napolitana, because it could take a while for anything to appear in the window. System Profiler is going to walk through all mounted hard disks looking for applications, and if you’re anything like me, it’s a long walk (a big disk containing a lot of applications). When System Profiler finally finishes, your applications will be listed, along with several columns of information about them. The column you’re most interested in right now is the Kind column (you can drag it to the left to move it next to the Application Name column, if that makes parsing the results easier). It will say one of four things: 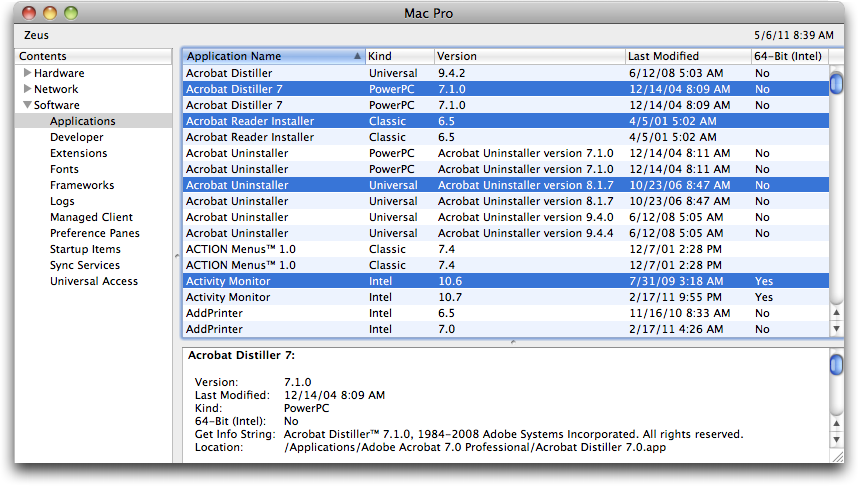 The list of applications presented by System Profiler may be very long and intractable. One way to make it more tractable is to sort the list: click the Kind header at the top of its column. Now your PowerPC applications are listed together in alphabetical order. If you’d like a more conveniently searchable record of this information, you can copy a subset of this list as a text file. With the list sorted by Kind, click the first PowerPC application to select it, then scroll down and Shift-click the last one to select all the PowerPC applications in between. Now click in the description pane at the bottom of the System Profiler window, press Command-A to select all the text, copy, switch to your favorite text editor, and paste.

If you’re like me, you’ll find that the way forward isn’t quite so gloomy as you may have anticipated. I have lots and lots of PowerPC applications, but most of them I haven’t used in years. Here’s a quick survey of my situation:

Those are the only serious problems on my machine. Most of the other PowerPC applications on my machine have names I don’t even recognize. A few of them are games that I remember enjoying at one time, but I suppose I can live without; those sorts of games play better on the iPad anyway.

I expect that this article will be just one in a series, as various TidBITS editors chime in with tales of their preparations for Lion compatibility. As we wait for the fateful day, I comfort myself with the thought that, if I really need it, I have an Intel-based Mac that can boot into Snow Leopard, a PowerPC-based Mac that can boot into Leopard and use Classic, and a couple of really old machines that can even boot into Mac OS 9 (not to mention SheepShaver). Lion’s roar can’t scare me!

Comments About Preparing for Lion: Find Your PowerPC Applications