Here’s a confession that should surprise no one: I personally find the Mac App Store pretty much useless. To me, it seems little more than a way for Apple to extract money from developers, in exchange for the dubious “favor” of controlling what apps are allowed to do on my computer. And as for the App Store application, it seems to be modeled on the worst features of the iTunes Store interface, a winky-blinky antithesis of usefulness. At its best, the Mac App Store might at least offer a cornucopia of apps for new users to find and use to extend their Macs, but the App Store application, by making apps difficult to discover, turns the Mac App Store into something more like an app graveyard where only a few featured or popular apps
bubble to the top and everything else languishes in obscurity.

But what a difference an interface makes! Appalicious, a newly released application from ProVUE (makers of Panorama and Panorama Sheets; see “ProVUE’s Panorama Gets a Baby Brother: Panorama Sheets,” 7 January 2011), puts a whole new face on the Mac App Store. In doing so, it actually succeeds in making the Mac App Store useful for people like me who want to go beyond browsing with a couple of clicks.

The power of Appalicious comes in two parts. First, there is ProVUE’s online database that records information about all the apps in the U.S. Mac App Store. This database knows not only the current facts about the available apps, but also the historical facts about them; thus, it knows (for example) the changes over time in each app’s pricing. The screenshots below give some indication of what I mean (they come from the Appalicious Web site, not Appalicious itself). In the first screenshot, we learn that the U.S. Mac App Store currently holds 6,742 applications from 2,940 companies, of which 933 are free, and of which 1,352 are being sold today at a discount from an earlier price. In the second screenshot, we see
some details about those discounts. 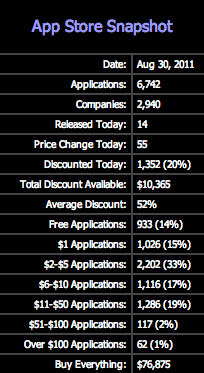 Second, there’s Appalicious itself. It is, of course, an application on your Mac. When you run it, it downloads the data about the apps in the Mac App Store from the online database, and presents those data to you using the full database power of Panorama’s super-speedy in-memory database engine. That means you
can instantly search, sort, and filter the list of available apps, to see just those you’re interested in. For example, in the screenshot below, showing the main Appalicious window, I’ve filtered the list to show just those apps currently selling at a discount of 75 percent or more, and then I’ve sorted the list to show first those apps that have been awarded the most stars by users. Needless to say, gleaning this kind of information from the App Store application would be utterly impossible. 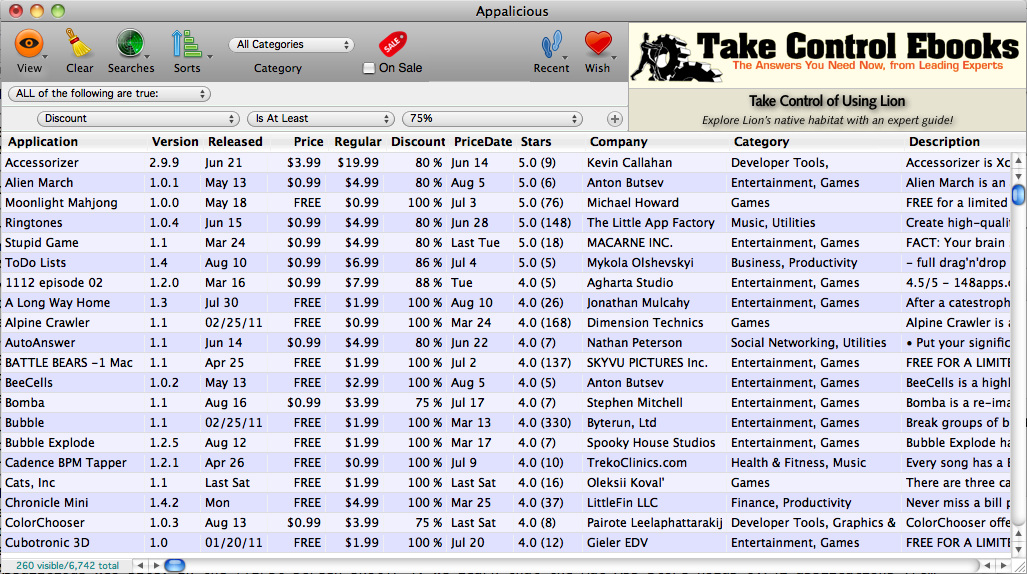 A secondary Appalicious window (called the detail window) displays additional information about an app. For example, in the screenshot below, I’ve double-clicked the listing for the first app in the main Appalicious window, thus bringing up a detail window describing that app, which is called Accessorizer. The window displays the screen shots and description from the Mac App Store entry; you can click a screen shot to see a full-size version. Note also the historical information shown down the left side of the window: for
example, we learn that this app once cost $19.99, and that its price was later lowered to $9.99 and has gone as low as $1.99 before settling on its current price of $3.99. (Such is the power of the historical Mac App Store data stored in ProVUE’s online database that one can almost sense the developer experimenting to find the sweet spot at which the app will sell best while earning a reasonable return.) If I decide to purchase and download this app, a button near the top left of the window (View in Mac App Store) lets me switch to the App Store application, where I can do so. 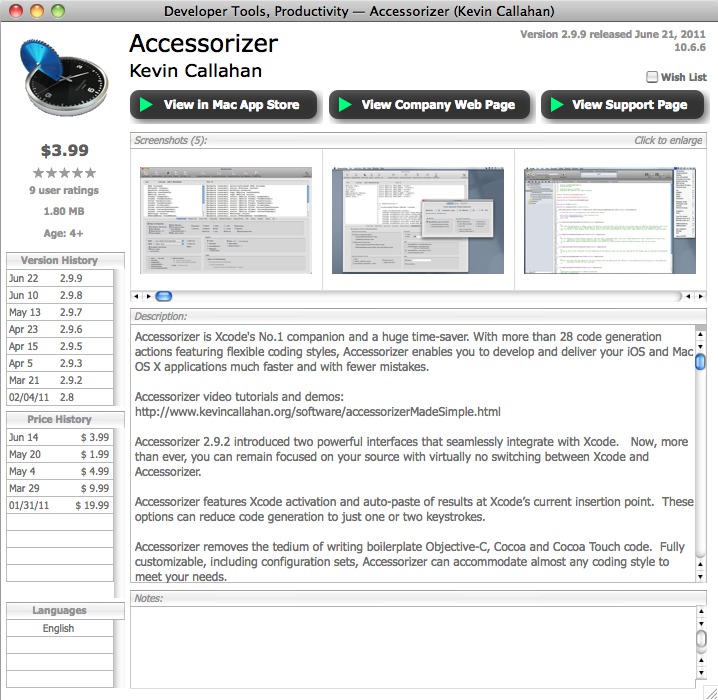 If you’ve experienced Apple’s App Store interface, you can readily understand why Appalicious opens up a whole new world for me. Quite apart from the super-fast searching and the historical pricing information, the mere capability to browse the apps available from the Mac App Store makes Appalicious a vastly more usable approach. As you can see from the screenshot above, the main window displays all the information about multiple apps, including the start of the developer’s detailed description of the
app, in a compact scrolling interface. And if an app seems potentially interesting, double-clicking its listing brings up the associated detail window — and multiple detail windows can be open simultaneously, while the main window remains open as well. Thus, instead of the frustrating, tedious back-and-forth between the different displays in the single window of the App Store, in order to learn whether an app is or isn’t of interest, I can explore multiple apps quickly and easily with Appalicious, pulling out detail windows so I can compare them side by side. Plus, the compact, text-based display of the Appalicious main window, and the capability to display a subset of the list quickly, makes apps discoverable in a
way that they definitely are not in Apple’s App Store interface. (Indeed, app developers will surely benefit from Appalicious, as a means of notifying the world of their products, just as much as end users.)

Another thing I greatly appreciate about Appalicious is the extent to which it puts the power into the hands of the user. For example, in Appalicious’s detail window, notice the field at the bottom where I can enter my own notes about this app. And back in the main Appalicious window, not only can I choose what columns to display, create simple or complex custom searches, and perform simple or multiple sorts, I can also create and maintain customized settings for each of those things, making a set of columns, a search, or a sort into a “favorite” that can be put into effect instantly by choosing from a menu. Indeed, Appalicious comes with numerous built-in preset searches and sorts, so that (for example) I can instantly see apps
that are “On Sale 5 Stars” or “Huge Downloads” or “Free (Recent)”. In addition, Appalicious keeps track of what apps I’ve recently viewed in the detail window, and enables me to put apps into a wish list.

Even this brief description should give you a sense of Appalicious. There really isn’t that much more to know about it, and what there is, you can easily discover for yourself. Appalicious comes with excellent online help, and is also backed by an excellent introductory guided tour and a bunch of screencasts. Above all, Appalicious is fun and easy, and it makes the Mac App Store fun and easy. It actually makes me want to download stuff from the Mac App Store! Using the discount history to focus on the best available deals gives me, I must confess, a particular thrill.

The pricing for Appalicious is a bit unusual. It’s free for a week after you start using it; after that, the application doesn’t stop working, but the linkage between the Appalicious application and the online database is suppressed, so that you are no longer able to obtain up-to-date information about what’s in the Mac App Store. In effect, what’s happened is that you were given an initial one-week subscription to the Appalicious service, which then expires. To extend the subscription, you have two choices. One is to pay, at a rate that is normally $12.95 per year, although coupon codes can lower the price; right now, the coupon code INTRO gives you a year’s subscription for $7.95. Furthermore, if you use the Appalicious
interface to recommend Appalicious to a friend who then uses the app (even if they don’t pay to subscribe), your subscription is extended by a month, and your friend’s subscription is extended as well (this referral model is inspired by Dropbox). You can combine a purchased subscription with a referral subscription, and you can accumulate multiple referral subscriptions (up to two years’ worth). Considering how much you can save by judicious use of the information Appalicious gives you about Mac App Store applications and their pricing, this seems a reasonable cost.

Appalicious works on Mac OS X 10.4.11 Tiger or later (though we gather there’s currently an installation problem on Tiger that ProVUE is presumably investigating), but of course you won’t actually be downloading any apps from the Mac App Store unless you’re running 10.6.6 or later. Currently, Appalicious displays data only from the U.S. Mac App Store; we suspect support for versions of the Mac App Store in other countries is coming. It is a 23.8 MB download.