Although I’m the author of “Take Control of Using Lion,” I don’t actually like Mac OS X 10.7 Lion very much; the book doesn’t express my biases explicitly, but you can sense them clearly enough if you read attentively. And one of the Lion features I dislike the most is Resume, which I privately think of as “Zombies.” Resume comes in two parts:

I don’t like these behaviors because, to me, they fly directly in the face of precisely what restarting the computer or quitting an application is for. I like to quit an application exactly as a way of making that application close all its windows and forget about all its open documents. I like to restart the computer (very frequently) as a way of blowing out all the cobwebs, clearing memory, and putting the computer into a fresh state, with no applications running. I don’t want applications launching themselves automatically (aside from the few utilities that I’ve designated as Login Items in the Users & Groups preference pane), and I certainly don’t want applications that are launched to reopen a bunch of stale windows and
documents from the past.

In my book, I also explain how to take control of these features — which in my case means turning them off. When I restart the computer or launch an application, I want a clean slate, every time. Here’s how I get it: 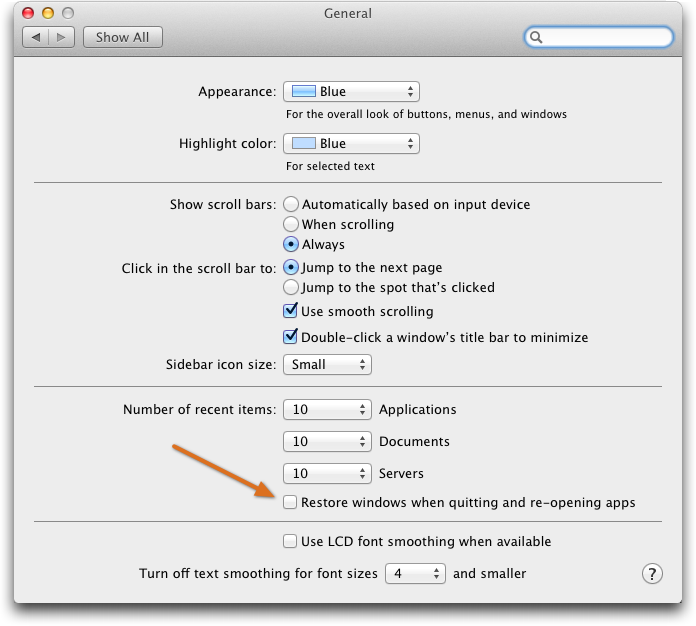 However, there’s a mystery. Even though I’ve unchecked “Restore windows when quitting and re-opening apps”, some applications still sometimes bring their zombie windows back from the dead when I launch them. Until recently, I hadn’t paid much attention to this mystery; I tended to shrug it off as more of Lion’s inscrutable annoyance. After all, coming back from the dead is what zombies do, so it didn’t surprise me that a few of them wouldn’t stay dead. I just sighed and closed the spontaneous
windows by hand.

At the same time, though, it irked me that, while I was supposed to be telling readers how to take control of Lion, I still couldn’t seem to get full control of Lion myself. I mean, Lion has been around for a year, and I still don’t have these issues straightened out? Shameful.

A few days ago, though, I suddenly thought I’d detected a pattern. I made a few tests, and sure enough, there it was: the mystery was solved.

I know you’re right on the edge of your seat, so I won’t keep you in suspense. Here’s the answer: If an application is running at the time you shut down the computer (or restart or log out), that application will reopen its zombie windows the next time it is launched, even if you have told it not to.

As soon as I’d noticed this pattern, I also understood the reason behind it. In Lion, there’s more than one way of quitting an application. When you quit an application (by choosing Quit [ApplicationName] from the [ApplicationName] menu, or pressing Command-Q), the application shuts down in good order, and your preferences with regard to zombie windows are enforced. But when Lion quits an application (because you’ve told the computer to restart or shut down while the application is running), it takes a completely different approach. It reasons that we need to get the heck out of here as quickly as possible, so it uses a new-in-Lion protocol called Sudden Termination (if the application in question supports it).

Naturally, I regard this as a bug. But it isn’t a bug I expect Apple to fix any time soon (or ever), because it’s rooted in the new Lion philosophy of making the desktop more like an iOS device. Reading the developer documentation, you can actually witness Apple persuading programmers that Sudden Termination is a good thing, “designed to improve the user experience.” (You also discover that it is of a piece with Automatic Termination, which I complained about in “Lion Is a Quitter,” 5 August 2011.) Fortunately, until Apple fixes this problem (which will presumably be never), there’s an easy, though tedious workaround. Before I restart or shut down my computer, I quit every
application. Slowly. Deliberately. Manually. Myself. One. By. One.