In the recently released OS X 10.8 Mountain Lion, Apple has done something I thought they’d never do: they backtracked — sort of. They heeded the objections of users to a major feature of 10.7 Lion, and took steps to meet those objections. They didn’t remove the feature — that, I suppose, would be asking too much — but they changed the interface and provided an increased range of user choices and capabilities.

In this article, I’ll sketch out how Mountain Lion is different from Lion with regard to this feature, and why, therefore, I personally like Mountain Lion much more than Lion. For more detail, and for lots more about Mountain Lion, see my book, “Take Control of Using Mountain Lion.”

The Lion Situation — The feature in question, which Apple calls the Modern Document Model, is the way documents are saved and handled by applications that have been appropriately rewritten to adopt certain technologies introduced in Lion: 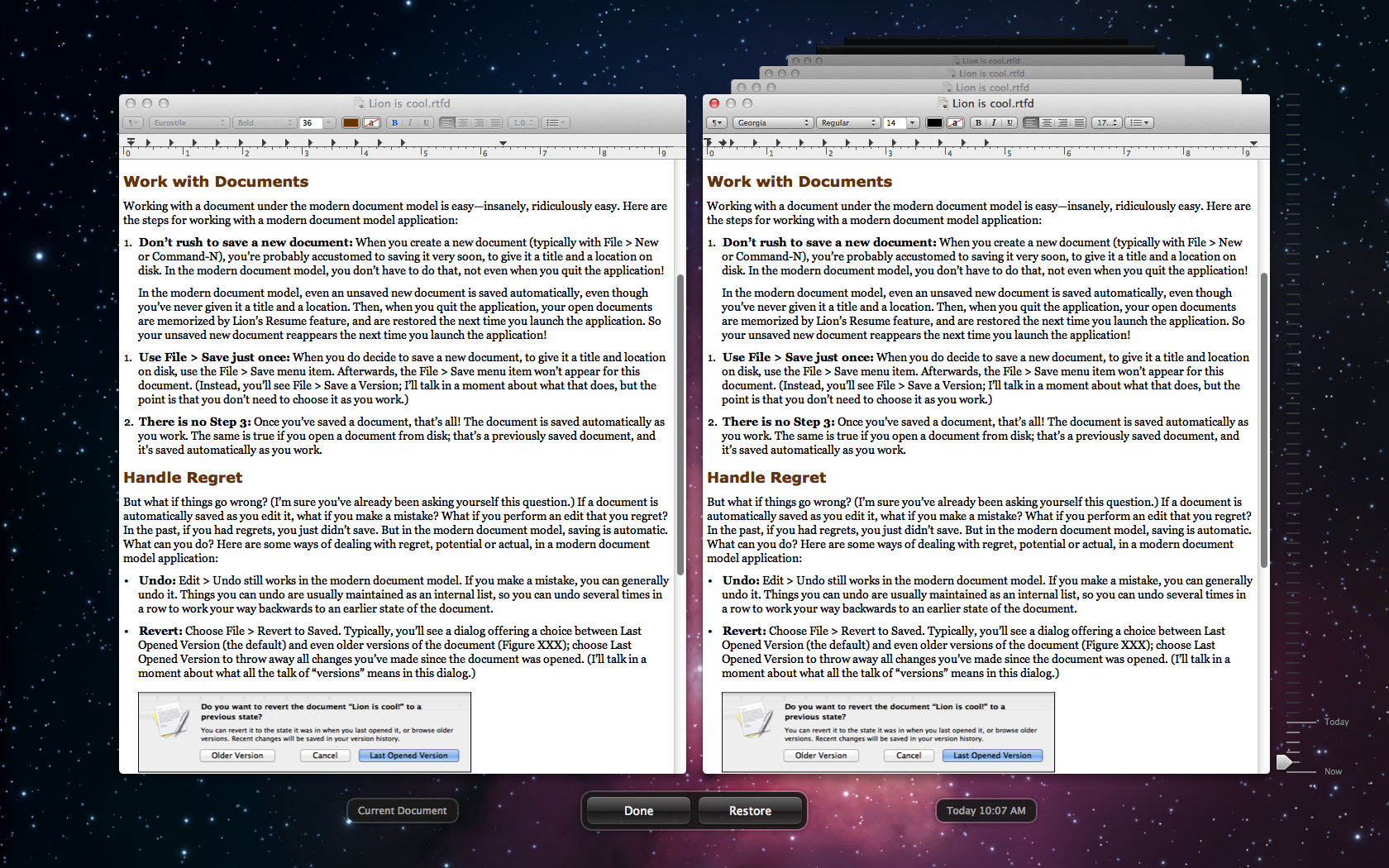 The Trouble With Lion — Lion’s Modern Document Model constituted a revolution in how users had to work with documents through applications, and for many users, it wasn’t a revolution they liked. Unlearning the habit of saving whenever you think of it, lest your work be lost if the application crashes, was easy; the heart of the problem had more to do with accidents.

Who hasn’t quit an application, supposedly without having altered a document, only to see the “Save changes?” dialog appear unexpectedly? It turns out that you did alter the document, but by mistake; you thought you were copying, perhaps, but you cut instead, or the cat prodded the keyboard while an important paragraph was selected. That dialog warned you, and rescued you, letting you cancel those unintended changes. Under Lion, there is no dialog and no warning; your accidental changes are saved without your knowledge and possibly contrary to your desires.

Auto Save in Lion, users objected, was thus a potential trap, an invitation to cause the very thing it was supposedly designed to prevent — accidental data loss. The data might not really be lost, since the Versions database might hold an acceptable earlier state of the document; but finding that state in the clumsy Time Machine-like interface wasn’t easy. And what if, after saving a problematic change that you weren’t even aware of, you closed the document and didn’t return to it for days, perhaps weeks, opening it later only to be horrified and confused? Would Versions help you understand what had happened? Would the database still contain the desired document state? It all seemed so backwards, somehow: first make a
drastic accidental mistake, then later discover it (if you’re lucky) and scurry around trying to fix it — whereas, prior to Lion, you would have been alerted before making the mistake of saving the faulty document in the first place.

Then there’s the matter of experimentation. Who hasn’t deliberately played with a document experimentally, knowing that no harm would be done if things went wrong, since you could easily close without saving at the end, or spawn off your unsaved changes into a different document with Save As? Now Lion comes along and saves your experimental changes behind your back and against your will. Lion doesn’t really prevent experimentation, of course; all you have to do is choose File > Duplicate, and now you’re working in an unsaved copy of your document, which you can ultimately close without saving. But here again, things seem to be backwards, since you must remember to choose File > Duplicate before you
experiment; you might easily forget to do that, or you might not realize, until it’s too late, that your changes are undesirable.

Mountain Lion to the Rescue — What Mountain Lion brings to the Modern Document Model mix are two checkboxes, in the General pane of System Preferences, that affect the behavior of applications when documents close, along with some new menu items. Let’s start with the two checkboxes:

All of these menu items are present not only in the File menu but also in the document window’s title bar menu — except, oddly, for Save As, which is thus unfortunately reduced to second-class status and is unnecessarily difficult to discover. 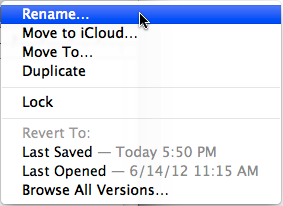 (I should also mention one further change. In Lion, a document would be locked automatically if it wasn’t edited for some amount of time, such as two weeks; in Mountain Lion, this autolocking behavior has been withdrawn. You can still lock a document by choosing Lock from the title bar menu, but this is no different from the capability the Finder has always had to let you lock a document.)

Conclusions — For me personally, these changes have made Mountain Lion usable and acceptable in a way that Lion was not; and I expect that many users will feel the same way. I’m particularly impressed with Apple’s willingness to provide users with options, something that in the past I’ve frequently called upon them to do. The two General preference pane checkboxes enable users to make Mountain Lion either keep on behaving like Lion or simulate the pre-Lion document behavior with which they may feel more comfortable and confident. Similarly, I like being able to choose File > Duplicate or File > Save As, depending on the nature of the task at hand. And I think
Apple’s rejiggering of the File menu items, especially the new Rename and Move To items, is just splendid.

Please note, though, that I’m not claiming to be entirely happy with the Modern Document Model. Actually, to be quite honest, in my view, Auto Save is itself a massive mistake, an utterly erroneous pretense that the desktop is like iOS. Its deeply flawed nature is well revealed by what happens when you edit a file on a mounted remote disk: you get Auto Save without Versions, which even Apple has admitted is troublesome; see Adam Engst’s article on this topic, “Beware Lion’s Versions Bug on Network and Non-HFS+ Volumes” (8 September 2011).

Also, complications are added by the presence in Mountain Lion of “Documents in the Cloud” — the capability of some applications to save their documents where iCloud can synchronize them. I don’t want to get into details here, but suffice it to say that if an application is iCloud-savvy, its various Modern Document Model warning dialogs and its Open and Save dialogs look different from those of an application that isn’t iCloud-savvy. We thus end up with a three-way “Balkanization of the desktop”: applications that don’t subscribe to the Modern Document Model, those that do but aren’t iCloud-savvy, and those that do and are iCloud-savvy. Each of these looks and behaves differently from the others (see my “Take Control of Using Mountain Lion” for details).

While I’m in a complaining mood, I’d also like to mention my reservations about that second checkbox, “Close windows when quitting an application.” As I’ve said, this really does two things — it toggles global Resume on and off, and it changes whether quitting causes a document window to fall under the rubric of the first “Ask to keep changes” checkbox. But those two things, while related, aren’t strictly identical, and the title of the checkbox doesn’t describe either of them very accurately. The result is that it’s hard to understand just what this checkbox does; even the usually scrupulous John Siracusa seems to miss its full significance in his technical review of Mountain Lion, and I myself accidentally omitted part of the story in my Take Control book.

And Apple hasn’t quite implemented the first checkbox correctly, either. It says, “Ask to keep changes when closing documents,” but if you open and edit a document and then choose File > Save As (surely the most common use case for Save As), the original document is effectively closed without asking you about those changes; the new file contains the unconfirmed changes, which makes sense, but so does the old file, which is clearly a violation of your request to be asked about changes. Oddly, this is something Lion did somewhat better than Mountain Lion: in Lion, when you chose File > Duplicate on an edited document, you got a dialog offering a chance to revert before duplicating; that dialog no longer appears in Mountain
Lion.

However, all of that aside, I would still submit that the changes to the Modern Document Model in Mountain Lion are welcome, ingenious, and extraordinarily significant. I would still prefer a way to turn off Auto Save altogether; but if we stipulate that Apple will never allow that, they have bent over backwards to make Auto Save acceptable to a lot more users, even if they still haven’t got everything quite right. I cannot sympathize with an attitude like that of David Pogue, who, in his New York Times article introducing Mountain Lion, rightly calls Lion’s Auto Save “baffling”, but then
dismisses the Mountain Lion changes to the Modern Document Model as consisting only of a couple of menu items and assigns them a negative value. Those changes are the main reason, I argue, for preferring Mountain Lion to Lion, and might even entice users who never really updated from Snow Leopard to Lion (in which number I include myself) to make the switch to Mountain Lion more or less full-time.

Comments About The Very Model of a Modern Mountain Lion Document