In “The Very Model of a Modern Mountain Lion Document” (7 August 2012), I noted the many improvements in OS X 10.8 Mountain Lion over 10.7 Lion in the document-saving behavior of those applications that have been updated to use the built-in Auto Save architecture. One nice touch, I mentioned, was the return of File > Save As, which had been suppressed in Lion. But the behavior of File > Save As in Mountain Lion, I went on to say, left much to be desired. Although it does allow you to give the current document a new name and location, and although it does cause the current document window to switch to editing the new document rather than the old one, it also saves the
current document as the current document closes, behind the scenes. This is counterintuitive and possibly dangerous behavior, especially since a common reason for choosing File > Save As has always been to shift unsaved changes from an open document to a copy without affecting the original.

The good news is that this problem is solved in the recently released OS X 10.8.2 (see “OS X 10.8.2 Eases Notification Center, Messages Frustrations,” 19 September 2012). And the even better news is that it is solved ingeniously, in a way that makes everybody happy. Once again, Apple has, to my astonishment, shown a willingness to listen to user complaints and to resolve difficulties, tardily to be sure, but with a decided degree of insight and elegance.

When you choose File > Save As in 10.8.2, a Save dialog appears. This has always been the case; I stress that point, because I want to impress upon you that Apple’s solution involves no new dialogs of any kind. The change is within that Save dialog. If the current document contains unsaved changes, the Save dialog now offers a checkbox, “Keep changes in original document.” Moreover, that checkbox is unchecked by default, meaning that if you do nothing, you will not keep the changes in the original document — thus restoring the expected behavior of Save As. And this checkbox can appear regardless of your settings in the document management checkboxes of the General preference pane. 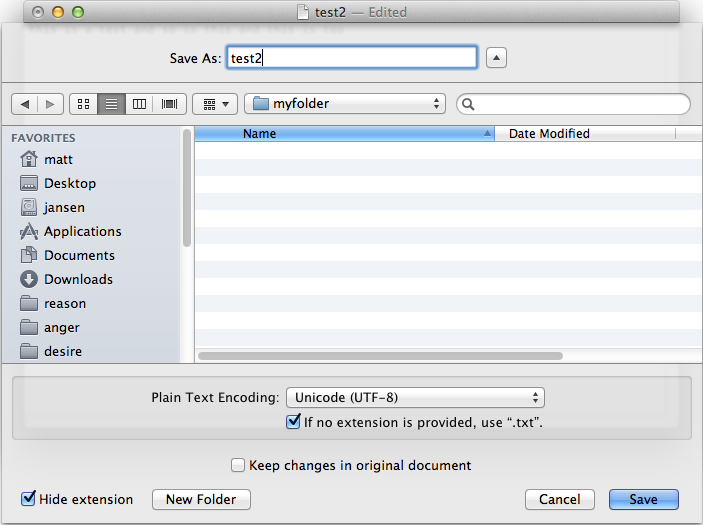 (Some users report finding that the checkbox is checked by default. I do not know what causes this difference from my own experience, but it hardly matters, as you only need to change the setting once. If, when you first choose File > Save As after updating to Mountain Lion 10.8.2, you see the Save dialog with the checkbox checked, and if, like me, you prefer it unchecked, then simply uncheck it and proceed to save, and the checkbox will remember that setting the next time.)

This simple expedient puts paid to the entire matter. With the checkbox unchecked (either by default or because you unchecked it the first time you saw it), if you subsequently ignore the checkbox and proceed simply to save the new copy of the document, File > Save As will behave exactly as you expect: the new document will be created and you will find you’re editing it, while in the meantime the unsaved changes in the original have been retracted, reverting to the state of the original either when it was opened or when you last saved it manually.

If you’re like me, you will in fact ignore the checkbox, and thus the addition of this feature will mean no more work than before: you’ll be using Save As just as you’ve been using it since System 6, and with the same effective results. It’s true that under the hood there’s a major difference: in 10.6 Snow Leopard and before, not saving changes in an edited document meant that the changes never reached the disk and just vanished into thin air, whereas, in Mountain Lion under Auto Save, changes are being saved to disk all the time, and the document on disk must be reverted (using the Versions database) if those changes turn out to be unwanted when the document closes. In general, however, you won’t be conscious of this; the
ultimate surface manifestation is that the changes are not saved.

The really nice thing about this checkbox is that, for those people or those occasions when you explicitly do want to save the unsaved changes in the original document, you have the option to do so. Apple could have restored the original behavior of Save As, plain and simple; instead, they went further, letting you set a default behavior and making it easy for you to change that setting if circumstances warrant. I can only applaud. This is exactly the sort of thing I’d like to see more of — excellent default behavior along with freedom of choice to override those defaults — in contrast to the “Big Brother knows best” quality that resulted in my reluctance to use Lion.

Comments About With 10.8.2, Mountain Lion Saves Even Better