If you use Time Machine to back up your Mac, you have the security of automatic backups. And if you’re a Dropbox user, everything in your Dropbox folder benefits from both the protection of offsite storage and file versioning. But what may not have occurred to you is that, by default, Time Machine is also backing up the contents of your Dropbox folder.

On the one hand, backing up your Dropbox folder with Time Machine gives you an added layer of confidence that your files in Dropbox are backed up locally, in case something were to go wrong with the Dropbox Web site. Plus, Dropbox maintains deleted files for only 30 days unless you pay for a Dropbox Pro account and enable the Packrat add-on in your account settings, so a Time Machine backup could let you restore deleted files after that 30-day period.

On the other hand, since all those files in your Dropbox folder are duplicated on the Dropbox Web site, they can be restored easily in case of accidental deletion or hard drive death, so there’s no inherent need to use space on these files on your Time Machine drive. (An earlier version of this article said that only files, not entire folders, could be restored from Dropbox. In fact, both files and folders, plus application packages, can be restored easily.) 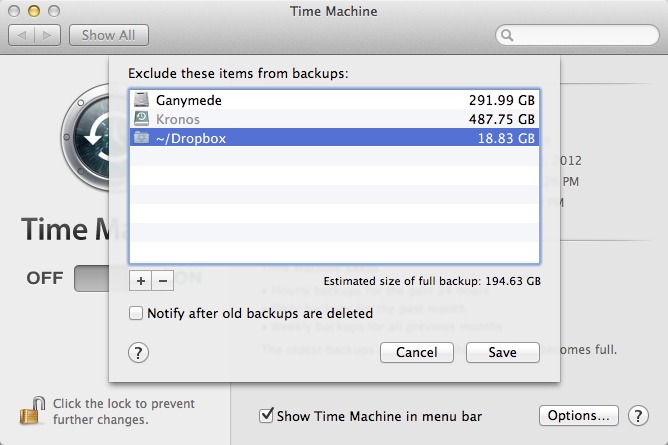 When I initially discovered my Dropbox files on my Time Machine backup, my first reaction was to exclude the files from my backup. After more thought, though, I realized there already had been times that I had deleted files from my Dropbox folder that I could have rescued via Time Machine. But if you have a Dropbox Pro account with Packrat enabled, or simply aren’t worried about needing to restore a deleted file more than 30 days later, you might prefer to save some space on your Time Machine
drive.

[Alicia Katz Pollock has been working with computers since designing a database on an Apple IIc for her father’s dental practice when she was 13. Today she is a consultant at Royalwise Solutions and a course author for Lynda.com. She holds a variety of Apple, Microsoft, and Intuit certifications.]

Comments About Deciding If Time Machine Should Back Up Dropbox