The recent update to OS X 10.8.3 Mountain Lion fixed a half dozen or so specific bugs (see “OS X 10.8.3 Mountain Lion Fixes Nagging Bugs,” 14 March 2013) and otherwise was accompanied, as usual, by minimal and vague release notes (“improves the stability, compatibility, and security of your Mac”) and no additions to Apple’s meagre documentation. On the surface, it didn’t appear to bring with it any major changes. Thus, it was only by accident that I stumbled across what I consider a big change with far-reaching implications.

I’m the author of “Take Control of Using Mountain Lion”, so after an update to Mountain Lion, I like to tour quickly through the System Preferences panes, to look for any small alterations in wording and placement of options. I just got around to doing so, and I was struck by the presence of a new checkbox in the General preference pane: “Save documents manually”. Moreover, when I checked this checkbox, I was surprised that the two checkboxes below it became disabled (dimmed out). Those two checkboxes are crucial to my experience of Mountain Lion; indeed, as I explained in “The Very Model of a Modern Mountain Lion Document” (7 August 2012), they are what make Mountain Lion usable for me, because, although they don’t completely turn off the annoying document Auto Save introduced in 10.7 Lion, they provide at least the sense that Mountain Lion is more like 10.6 Snow Leopard and before, by restoring to documents the close button’s “dirty” dot, along with a dialog asking, when you close a “dirty” document, whether you want to save its changes.

I didn’t want to lose the functionality of those two checkboxes! So why were they disabled, now that I had checked “Save documents manually”? To find out, I fired up TextEdit, which is my usual test bed for the default behavior of Cocoa-based document-centric applications — and was astonished at what I saw. Gone is the little pop-up menu in the document’s title bar. Gone is the File > Duplicate menu item; it is solidly replaced by File > Save As, without the user’s having to hold Option or add a shortcut to the Applications Shortcuts list of the Keyboard preference pane. Gone are File > Rename and File > Move To. Gone is the hierarchical File > Revert To menu, replaced by a simple File > Revert. In fact, the title bar and the File menu for a TextEdit document look just as they did in Snow Leopard.

Further experimentation confirmed my suspicions: not only did TextEdit now look as it did in Snow Leopard, it also behaved as it did in Snow Leopard. Evidently, this new checkbox in the 10.8.3 General preference pane equates to an option to turn off Auto Save completely, effectively reverting Mountain Lion’s document saving behavior to that of Snow Leopard and before. That explains why the other two checkboxes are disabled when this new checkbox is checked: they become irrelevant and unnecessary.

Although I was struck initially by the far-reaching nature of this change, it isn’t all that surprising when placed in perspective. After all, Auto Save itself was far-reaching, so naturally it feels far-reaching to have an option to turn it off. But this option is something I’ve repeatedly requested, so why should I be surprised when it arrives?

It is axiomatic, in some quarters, to claim that Apple never backtracks or reverts a change that it has instituted in a major system update, but that axiom is wrong. After all, Mountain Lion itself is already a kind of backtracking from Lion. In Lion, Auto Save was imposed absolutely and with no options for modifying its behavior; users complained and were confused by the loss of File > Save As and the document’s “dirty” dot, and by the need to use File > Duplicate to approximate the missing behavior of File > Save As, which necessitated an entirely new workflow involving advance planning to avoid saving accidental changes to an open document. Adoption of Lion among the Snow Leopard user base was reluctant in part for that reason. Mountain Lion, as I explained in “The Very Model of a Modern Mountain Lion Document,” didn’t remove Auto Save itself, but it did roll back, optionally, its most unfamiliar surface manifestations, along with other important retractions, such as Lion’s much-reviled document auto-locking behavior (a document would lock itself if you didn’t edit it during a 2-week period). Later, 10.8.2 constituted a further retraction, when Apple restored the original meaning of File > Save As, which had been confusingly altered when Save As was restored in Mountain Lion, as I explained in “With 10.8.2, Mountain Lion Saves Even Better” (20 September
2012).

The plain fact is, however, that many users have continued to hang back, either remaining completely with Snow Leopard, or else (like me) using Mountain Lion reluctantly and when necessary, but returning to Snow Leopard for serious work whenever possible. This fact, along with the vociferous objections of users to Mountain Lion, cannot have escaped Apple’s attention. Thus it is not at all unreasonable that Apple should provide such users with an acceptable upgrade path, by means of an option to restore an aspect of Snow Leopard to which they were particularly attached.

This decision on Apple’s part is good. For all its faults, Mountain Lion is the future of OS X. It contains many valuable technical improvements under the surface. Moreover, backward compatibility is difficult for developers to achieve, so fewer and fewer new applications will work on Snow Leopard. Thus, current Snow Leopard users need a way to move forward, and it seems to me that this simple checkbox will encourage and justify a more universal acceptance of Mountain Lion.

On the other hand, one swallow does not make a summer, and one checkbox does not magically restore everything about Snow Leopard whose subsequent loss has been deplored by users. Those who found window and desktop management more coherent in Snow Leopard’s Exposé than in Lion and Mountain Lion’s Mission Control, for example, are not likely to find Mission Control magically reverted in some future update. And PowerPC applications, as I warned years ago in “Preparing for Lion: Find Your PowerPC Applications” (6 May 2011), are never going to run in Lion or Mountain Lion except under some advanced virtual system arrangement.

But it turns out that this checkbox isn’t the only example of Apple revisiting past decisions. It’s nice to see that, as Dan Moren and Lex Friedman have examined in depth at Macworld — saving me the work of doing so! — 10.8.3 also give users the option to remove the skeuomorphic window renderings that make the Contacts application look like a physical address book and the Calendar app resemble a physical desk calendar. One useful detail from Dan and Lex’s article: there are apparently multiple builds of 10.8.3, and if you don’t have Build 12D79, dated today, these options won’t appear. Choose About This Mac
from the Apple menu, and click where it says “Version 10.8.3” to make use of one of Apple’s useful Easter eggs: the first click reveals the build number and the second your Mac’s serial number. 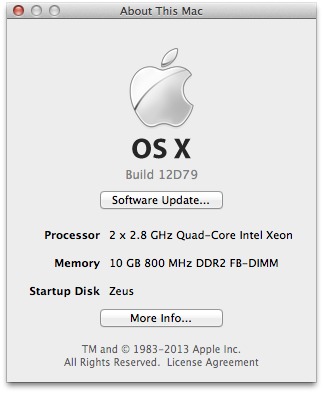