I went on a little dirt bike ride the other day (that’s “dirt bike” with an internal combustion engine, not a pedaled mountain bike). Instead of describing where it was and telling you how the road climbed in switchbacks from the Old Ridge Route to a mountain ridge above the Mojave high desert and parallel to the San Andreas fault, I’ll show you: the start of my route looks like this. For the full effect, though, you should look, not at a screenshot of the map, but at the map itself; to do so, please click this link to view my route as portrayed by Google Maps (don’t forget to come back here afterwards!). 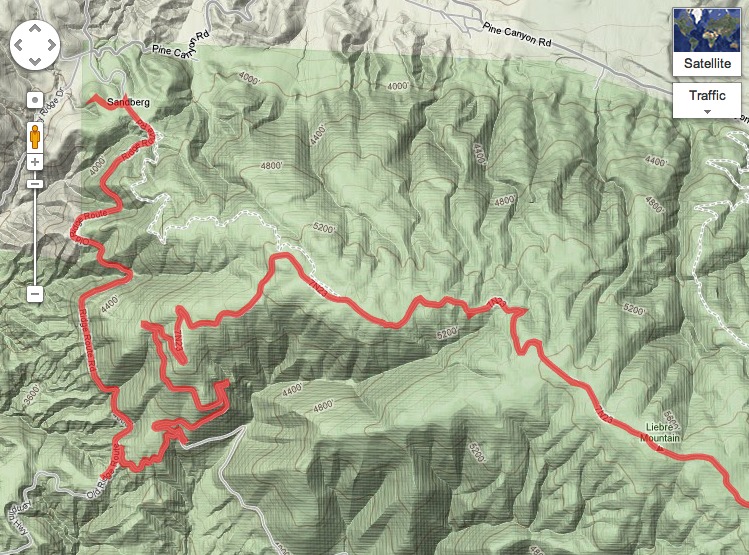 To me, that’s just incredibly cool. It’s cool because Google Maps is cool. You get all the magic of Google Maps. You can slide the map around, to view more of the route I took. You can zoom out, to get a better sense of what part of the world all this happened in. You can change to Satellite view, to see the area photographed from above. It’s a Google Map, as provided by Google — but the path I followed as I was dirt biking is projected onto it.

Perhaps this doesn’t seem miraculous to you. But it does to me, because I remember when this feature of Google Maps didn’t exist. We all have a GPS tracker these days. I was a late adopter, as usual, but as soon as I had a GPS tracker, I wanted to use it to make a record of the various places I like to go dirt biking. I discovered immediately that showing such a record to other people was not at all easy! I had to resort to mapping my tracks on my own computer and then posting a screenshot. That’s okay, but you can’t scroll or zoom a screenshot; what you see is all you see. A Google Maps map is dynamic and interactive. You can use it to learn and explore. It’s part of the great Google Maps cartographic overview of the
whole world.

An alternative, in the old days, was to give someone a KML file (or a KMZ file; it’s the same thing as a KML except that it’s compressed) containing the track. They could then open that KML file on their own machine, using Google Earth, and thus examine Google Earth’s display of the track, projected onto satellite imagery of the world. But Google Earth, while very cool in its own way, didn’t contain a topo map view. And, of course, downloading a file and opening it with Google Earth on your own machine
is a lot more work than just clicking a link and instantly seeing the map in your Web browser. But although Google Earth could display a GPS track from a KML file, Google Maps couldn’t.

I don’t know when Google Maps acquired the capability to display a KML/KMZ file. But it can now do so, and that’s why the earlier link in this article works. You, too, can export a waypoint or a track from your GPS tracking device, hand it to Google Maps, and provide your friends (or the whole world) with a link they can click to see that information in Google Maps. And now I’m going to tell you how.

Now let’s go back to the step where we obtain the KML or KMZ file to begin with. This can be extremely easy or quite tricky, depending on your circumstances. If you’re lucky, your GPS tracker will simply give you a KML/KMZ file, so there won’t be any problem. For example, let’s say your GPS tracker is your iPhone. If you use the MotionX-GPS app to record your track, then using the Share feature to email a track or waypoint generates two files: a GPX version of the information, and a KMZ version. That KMZ file is ready to use with Google Maps, if you so desire.

If, on the other hand, your GPS tracker provides files in some other format, then you’ll have to transform the track recording from that format to KML. For example, let’s say I’d rather not carry my iPhone on a dusty, potentially crashy dirt bike ride. Instead, I use my Garmin Forerunner 305, which I also use for running. When I get home, I attach the Garmin device to my computer, and it hands me a file in GPX format.

So now, if I want to make that track available for Google Maps, I have a conversion problem: I need to convert from GPX to KML. Luckily, GPX is a popular format, and this conversion is a common one, so there are easy ways to do it. One way is to let Google Earth do it for you. You do have a copy of Google Earth on your computer, right? Well, Google Earth can import a GPX track and then export it for you as KML or KMZ. Choose File > Open in Google Earth, select your GPX file, and select Create KML Tracks in the little dialog that appears. The file is converted to KML and imported into Google Earth, which lists the imported track under Temporary Places (and maps it onto the earth). The track’s listing is also selected, so immediately
choose File > Save > Save Place As and save it out as a KML or KMZ file.

Another approach is to perform the conversion online, using the GPSVisualizer Web site. This excellent site has many other splendid features: for example, it can split a multitrack file into individual tracks.

If the file you’re starting with is not in GPX format, the conversion is going to be trickier to perform, and I can’t tell you exactly how to do it, especially because there’s such a wide variety of formats in use. However, there are some free universal GPS file format converters that can help. The GPS Visualizer Web site, which I just mentioned, has a good converter interface.

Another option might be the free “universal” GPS file converter, GPSBabel. It’s available as a command-line tool, and if you’re reasonably adept with such things, you can easily download the source code and compile it, and use it via Terminal. Alternatively, there’s a prebuilt application wrapping GPSBabel, called GPSBabelFE, that you can download.

Unfortunately, GPSBabel is relatively difficult to use. The command-line options are numerous and confusing, and if you get them wrong, your converted file won’t turn out properly. The prebuilt application is no better; it provides a graphical interface for setting all those command-line options, but the interface itself is confusing, and defaults to the wrong settings.

To make a KML, you want your output format to be “Google Earth (Keyhole) Markup Language.” In the Options dialog, you want to deselect everything and then select Write KML Track. Another nice option is to select Line Color, which enables you to dictate the color in which the track will be displayed in Google Maps; alas, you must enter the color manually as a sequence of hexadecimal digits. I did in fact use this feature, though, to make my KML files; the track color on the Google Map from the first link in this article is 991111EE.

I’m sure there are lots of other ways to do everything described in this article (and perhaps readers would like to tell us about them in the comments). My purpose here has been to celebrate the fact that Google Maps can display data from a KML file, to explain how I’m using that fact, and to encourage you to do the same. Don’t tell your friends where you were — show them!

Comments About Show, Don’t Tell, Where You Went with Google Maps