Ask me how I move documents from one of my Macs to another, or from my Mac to my iPad or iPhone, and I’ll probably say, “Dropbox.” I hardly ever think of using iCloud’s Documents in the Cloud feature to share or transfer documents among my devices. The reason, I think, is that Apple’s interface to iCloud is so poor, especially on the desktop with OS X 10.8 Mountain Lion, and especially in comparison to Dropbox’s interface.

My Dropbox folder is, happily, just an ordinary folder in the Finder, giving me direct Finder access to a central repository holding everything I’m keeping in the cloud through Dropbox. Simple, obvious, direct, and easy to use.

In contrast, iCloud documents maintained as Documents in the Cloud are shown in a totally different way. They aren’t usually visible in the Finder at all! Instead, you see them only in a peculiar, substandard, iOS-like Open dialog, and only within one particular application. That situation is frankly ridiculous. I shouldn’t have to launch (say) TextEdit, let alone choose File > Open within it, just to see my TextEdit documents, merely because they happen to be mirrored into the cloud! And there’s no reason why my iCloud documents should be tied to a single application in the first place, especially seeing as the division is arbitrary: a document kept in, say, TextEdit’s cloud folder doesn’t have to be a TextEdit
document — it can be anything at all. 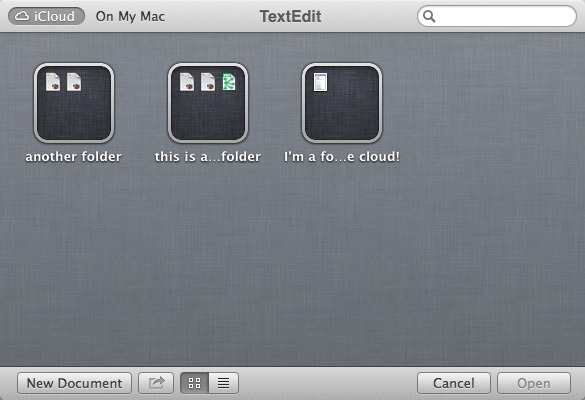 With some difficulty, and if you’re willing to play the role of Power User, you can see your iCloud documents in the Finder’s folder hierarchy, if you really want to. They are stored in your Library folder, in a subfolder called Mobile Documents. The Finder, however, fights quite hard to prevent you from seeing what’s really going on here. The Library folder is normally invisible (though you can fix that; see “Dealing with Lion’s Hidden Library,” 20 July 2011), and the
Finder insists on titling the Mobile Documents folder’s window as “iCloud”. And is this view of your iCloud documents, even if you can be bothered to arrange to see it, of any real use? It might be more of an invitation to damage something. 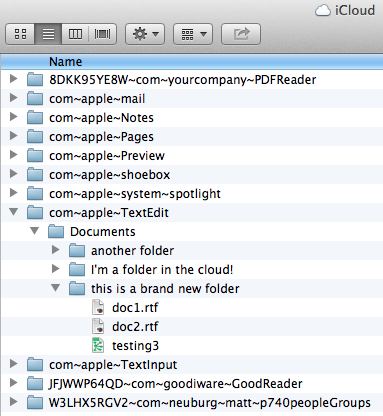 Cloud Mate’s first way of showing you your iCloud documents is through its own window. The Cloud Mate window’s sidebar lists your iCloud-enabled applications, and you can view only one application’s documents at a time; but at least the window is somewhat Finder-like. You can create folders, and rename files and folders, in Cloud Mate’s window, and you can drag files and folders from the Finder into it. You can also drag files and folders out of this window, or from one application’s domain into another application’s domain. (If you try this, note that there’s a slight delay where you must hold down for a while on an icon before it becomes draggable.) And the Cloud Mate application helps you avoid losing data by
ensuring that just about every form of dragging makes a copy rather than moving files. 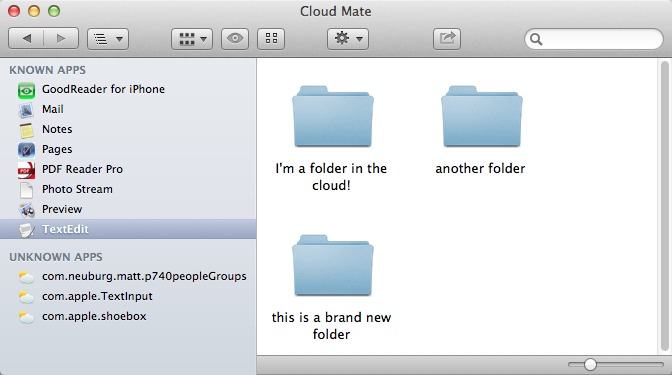 The second way in which Cloud Mate shows you your iCloud documents is via a virtual Finder volume that unifies access to the various iCloud document folders. This magic is performed through an installation of OSXFUSE. OSXFUSE, the successor to MacFUSE, is a low-level piece of software that enables developers, in effect, to construct their own file systems. That scares me somewhat, but I suppose my fears are irrational, and besides, you don’t have to use this feature if you don’t want
to.

In this case, OSXFUSE is being used to gather up the contents of ~/Library/Mobile Documents and make those contents appear more normal. The funny folder names such as com~apple~TextEdit are turned into ordinary names such as TextEdit, and the contents of their Documents subfolders are hoisted up to the top level. The resulting virtual file system forms a volume that you can then access in a genuine ordinary Finder window, giving you all the normal power of the Finder but with a cleaner interface than looking into the Mobile Documents folder directly.

The resulting Finder window isn’t quite as magical as one might hope. Column view works well, and I recommend that you stick to it. But the iCloud document folders, although you can dive into them one at a time in column view, are portrayed as file aliases in list view, so they have no “flippy triangle” that might be clicked to open them hierarchically to view their contents simultaneously within the same window. Nevertheless, this is a clever and useful way of exploring your iCloud documents directly in the
Finder. 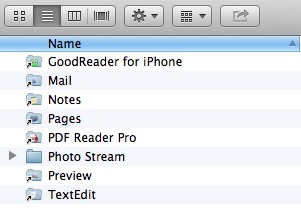 As with Dropbox, you need to be a little careful if you don’t want to commit your only copy of something to iCloud. If you drag a file into an iCloud document folder on this virtual volume, you move the file; alternatively, of course, you can hold Option as you drag, or use Copy and then Paste, to get a copy. Similarly, if you drag a file out of an iCloud document folder onto, say, the desktop, you are removing it from iCloud (and a dialog warns you of this). None of that,
however, is surprising; indeed, it’s delightful. This is just the Finder acting the way the Finder normally acts and having those actions reflected on iCloud. 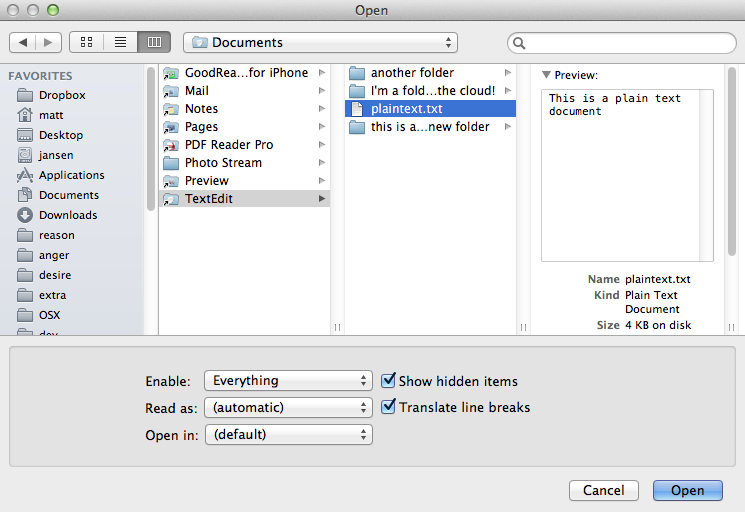 Cloud Mate, to me, is an excellent start on a really good idea. A unified, reasonably nimble view of your iCloud documents might very well make you more willing to use Documents in the Cloud in the first place. Certainly what Cloud Mate provides is a heck of a lot nicer than what Apple offers through its linen-backed document-based Open and Save dialogs. If Apple had any sense, they’d look at Cloud Mate and slap their foreheads: “Oh, this is the sort of thing we should have done!”

Cloud Mate does have its limitations, though. The Cloud Mate main window’s imitation of the Finder isn’t complete, and not even all that Finder-like. It displays only icon view, a view that I never use in the real Finder. The developers, I sense (based on the response I got when I asked about this), intend to add other views, such as list view and column view, so perhaps they’ll get around to it eventually. Similarly, many Finder-like moves that you might try because of Cloud Mate’s Finder-like quality don’t work like the Finder. For example, selecting a file and pressing the Space bar does summon a window similar to Quick Look’s, but it isn’t really Quick Look, and pressing the Space bar again doesn’t dismiss it. Other
keyboard shortcuts, such as pressing Command-Up arrow to go up a level in the hierarchy, are missing as well.

All of that, however, is forgivable; the truth is that writing an application that works enough like the Finder to make you feel you’re in the same powerful world as the Finder itself is really difficult, and perhaps Cloud Mate’s developers are wise not to have set their sights so high. Indeed, I know of only one application that succeeds in doing such a thing, and that’s Path Finder (see “Path Finder 5 Beats the Finder’s Pants Off,” 29 June 2009). The best view of my iCloud documents that I achieved while playing with Cloud Mate came from marrying Cloud Mate with Path Finder; viewing the OSXFUSE virtual volume created by Cloud Mate
through Path Finder in list view does display the entire hierarchy, and is an absolutely delectable experience.

If you think that Dropbox-like access to your iCloud documents would be useful, you don’t have to pay much to obtain it. Cloud Mate costs just $6.99 (you purchase your license through FastSpring; an app like this doubtless stands no chance of being approved by Apple for sale in the Mac App Store). It’s a 9 MB download, and requires Mountain Lion.