After Apple’s recent earnings call, we were struck by how Apple’s executives spent more time cheerleading for the company and its products than discussing the quarter’s results (see “Apple Q2 2013 Results Show Higher Revenues, Lower Profits,” 23 April 2013). That prompted some internal discussion about why Apple should care about its stock price and just who Apple thinks it is serving — customers, with great products and service; shareholders, with dividends and by constantly growing the business; or speculators, who care not a bit for the business and are looking only to profit from fluctuation of the stock price. Of course, Apple doesn’t really give a hoot about speculators,
but it can seem that way, since the mainstream media loves to cover Apple’s stock price, and Apple wants that coverage to be positive.

In the latest staff roundtable, Tonya Engst and Michael Cohen joined me to talk through just why Apple should care about its stock price. A couple of interesting thoughts came out in the discussion.

One reason why Apple, like many other companies, cares about stock price is that stock is a significant part of employee compensation, both through employee stock purchase plans and stock options. We didn’t get into this much in the roundtable, but it’s an interesting approach, because ensuring employees own stock gives them some level of ownership interest in the company, and thus gives them incentive to promote the business. It’s also useful in attracting and retaining talent. But since the company can’t control the stock price, share value is often decoupled from how well the business is going — it might make more sense to incentivize employees with bonuses based on profits.

Turning back to the media’s role in all this, stock price is as close as the business world gets to a daily box score that reflects the immediate health of a company. (Along those lines, we mentioned a Planet Money podcast that explains why the Dow Jones Industrial Average is seriously flawed.) Being able to say that Apple stock is up or down meets much the same desire as reporting on which sports teams won or lost. It also provides a spine for an ongoing narrative, but it’s a problematic approach, since stock price reflects the market’s perception of the future value of a company (and at worst, is driven by rumor and innuendo).

We closed with the question of whether there might be a more accurate way to develop a box score to judge the health of a company, and hit upon the idea of crowdsourcing it by analyzing posts in Twitter. This isn’t a new idea — performing what’s called “sentiment analysis” has had some success in predicting stock prices and was used as the basis of a hedge fund’s investment strategy. Of course, because of this, sentiment analysis is now being used as actionable input by algorithmic trading software, so stock price
is now affected by what’s being said about the company in social media.

Still, I could imagine a sentiment analysis-based metric that could be used to report on the current perception of a company without explicitly dragging stock price into the equation. Some research turned up a few companies doing this sort of tracking, including Topsy, whose Pro service provides a sentiment score for a keyword and can graph it across time. 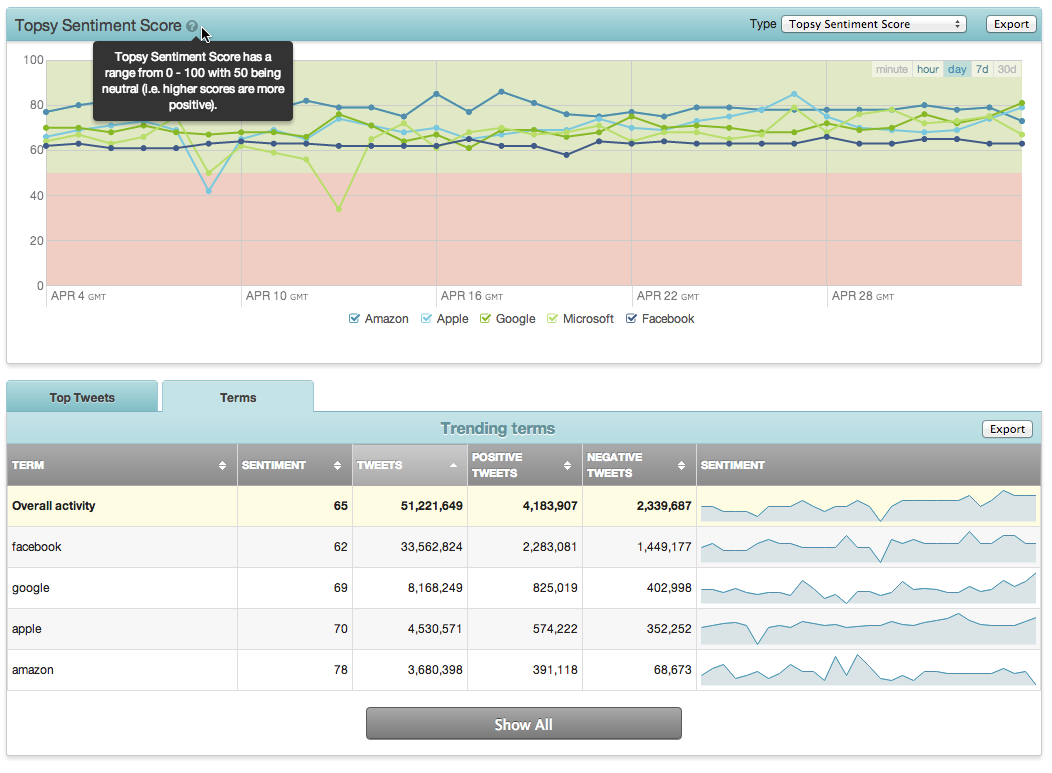 (Remember, you don’t have to watch the video; you can click the Listen link at the top of the article’s Web page to listen to the audio, or subscribe to the TidBITS podcast to have it downloaded to iTunes or your favorite podcast app automatically.)