Last month, I described Cloud Mate (“Cloud Mate: Turning iCloud into Dropbox?,” 4 April 2013), which, within a single application, gives you a conspectus (I love that word!) of all the documents kept in the cloud by all your iCloud-savvy applications. Since then, the developers, Red When Excited, have not let the grass grow under their feet. They have greatly improved the Cloud Mate interface on your Mac; even more amazing, they have provided a version of Cloud Mate that works on your iPhone or iPad — which should be completely impossible. I’ll describe some of the desktop improvements, and then I’ll explain how Cloud Mate for iOS makes the impossible
possible.

Recall that Cloud Mate on the Mac works by looking directly at the contents of the Mobile Documents folder in your home folder’s Library, portraying those contents in a user-friendly way, and enabling you to manipulate them. The current version, Cloud Mate 1.5.1, is even more user-friendly. In my previous article, I lamented that Cloud Mate’s window showed the documents in icon view only; it has now been joined by list view and column view. I also pointed out that Cloud Mate’s Quick Look feature wasn’t really the same as the system-based Quick Look; now it is. And I said something about certain Finder keyboard shortcuts not working in Cloud Mate’s Finder-like interface; now they do. Gosh, it’s almost as if the developers had
read my review! Doubtless there are many further improvements that I’ve missed, but unfortunately the developers don’t seem to maintain a public list of their release notes.

The really big news, though, is that Cloud Mate now also works on iOS. The iOS version, in addition to listing non-Apple cloud-based services to which you may be subscribed, such as Dropbox, Evernote, and Google Drive, also lists your iOS apps that are keeping documents in iCloud, as well as your desktop iCloud-savvy applications. 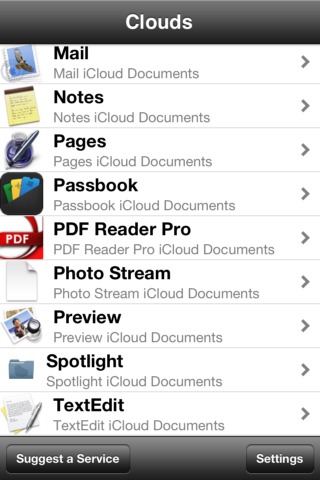 When you tap the name of an application, you’re shown a list of the folders and files that it’s keeping in iCloud. 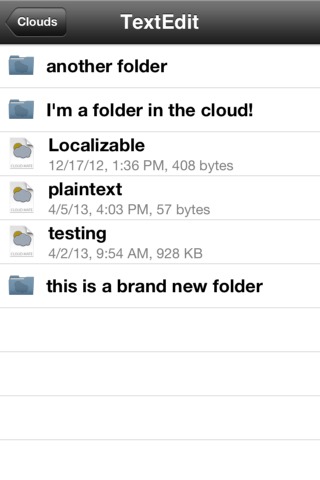 When you tap the name of a file, you’re shown a preview of that file’s contents, along with information about the file such as its name, size, and modification date. You can also delete or rename the file, move it to a different folder (including the iCloud folder of a different application), or perform any of the various Share actions, such as mailing it, printing it, previewing it with Quick Look, or opening it in some other app that handles that type of file. 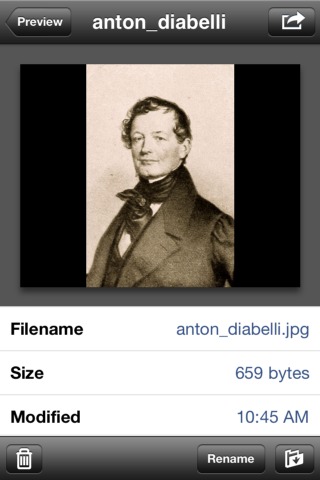 Like Milliways, the Restaurant at the End of the Universe, everything I just said is impossible. Cloud Mate can work on the Mac, because your iCloud-based documents are just documents stored in a particular location (the Mobile Documents folder), whose contents are automatically mirrored to and from iCloud. But on iOS, every app is sandboxed; it can see only its own documents. So how on earth can Cloud Mate on iOS
possibly know what other iCloud-based apps you have, let alone what documents those apps are keeping in iCloud, and (even more amazing) what the contents of those documents look like?

That’s ingenious, but I’m not finished, so hold on to your hat. I have not yet explained how on earth Cloud Mate on iOS is able to show you a preview of the contents of an iCloud-based file, as well as handing that file off to various other apps and services. The answer is that Cloud Mate’s information about each cloud-based document includes not only its name, size, and modification date, but also the URL of its storage location at www.icloud.com. Thus, when you tap on the name of a document, Cloud Mate does effectively the same thing that Dropbox does when you tap on the name of a document in the Dropbox app — it downloads the document from iCloud!

Indeed, the comparison between Cloud Mate and Dropbox, which I used in my earlier review of Cloud Mate for Mac, turns out to be even more apt with regard to Cloud Mate on iOS. What Dropbox user hasn’t wished that iCloud, with its world of documents in the cloud, behaved more like Dropbox? With Cloud Mate on iOS, it does! Instead of having to resort to an individual app and its interface to view and manage the documents that belong to that app alone, you can manage all your iCloud-based documents in one location, regardless of what application they belong to, and regardless of whether it’s a Mac application or an iOS app.

Take, for example, the JPEG picture of Anton Diabelli shown in the screen shot above. It “belongs” to the Preview application on the Mac. So how would I hand it to GoodReader on the iPhone? Well, starting on the Mac, I might select it in Preview, press the Share button, email it to myself, change to the iPhone, check my mail, find that message, tap the JPEG enclosure, and elect to open it in GoodReader. But with Cloud Mate, I can work entirely on the iPhone! The picture of Diabelli is visible there, and I can use the Share button to open it in GoodReader in a single step (or I can even move it directly from Preview’s iCloud folder to GoodReader’s iCloud folder). And the fact that I can also access Dropbox itself
directly within Cloud Mate, and thus move documents between the Dropbox cloud world and the iCloud cloud world, is a kind of super-bonus.

I’m personally lost in admiration for the cleverness and ingenuity of the iOS version of Cloud Mate. I’m also naturally unable to resist a certain measure of pessimism. Cloud Mate is clearly doing something that Apple would rather it not do. How long is it going to be before the sleeping gorilla rolls over and crushes Cloud Mate with a fist full of lawyers? I have no idea. But I can tell you this: until that happens, for one brief shining Camelot-like moment, thanks to Cloud Mate, iCloud’s documents in the cloud feature is working in exactly the nimble, user-compliant way in which Apple should have made it work all along, both on the desktop and on iOS. And I, for one, intend to enjoy it while I can!

Comments About Cloud Mate Brings Its Magic to Your iOS Devices