Today I took a spin through a few books on my iPad with Marvin, a new and free ebook reader from Appstafarian Limited, and there’s a whole lot to like about it. Billed as an “intelligent ebook reader,” Marvin provides an array of reading tools far beyond the offerings of other ebook readers for the iPad, including summaries based upon characters, extensive metadata-editing capabilities (a particular interest of mine; see “Managing Books in iTunes: This Novel Has a Nice Beat,” 14 January 2013), the capability to add the same book to more than one collection, smart collections, multiple page-turning gestures and other gestures that you can edit
(such as gestures to adjust the screen brightness or hue), and much more.

Marvin, like most other ebook readers on the iPad, can open any EPUB-based book that’s unencumbered by DRM. You can, of course, add books to Marvin via the traditional iTunes File Sharing panel, or by using the iPad’s Open In menu in Mail or Safari. But Marvin goes a few steps beyond those basic import methods: it can also import books using a built-in Web browser, or it can get books directly from Dropbox — it can even automatically watch a specific Dropbox folder and import any books that appear in it. And, if that’s not enough, it can also get books over the air from any OPDS (Open Publication Distribution System) catalog that’s on the Internet or on your own Mac — Calibre, for example, can be configured as a local OPDS catalog, allowing you to slurp books into Marvin directly from your Calibre library (if you have one) via your Wi-Fi network.

One mind-blowing feature, and probably the central feature of the app, is Marvin’s Deep View: activate it and the app “reads” your book (a process that usually takes less than a minute), gathers all the proper nouns (i.e., capitalized words other than those that start sentences) it finds, and presents them in ordered lists. You can see lists of the most important characters in each chapter (ranging from most to fewest occurrences), characters listed by the order in which they appear, or characters listed alphabetically. Deep View also provides Wikipedia articles about the book and its author, and it enables you to find and pin articles you find anywhere on the Internet to its article list. You can even use Deep View to generate a
separate book of chapter summaries based on a character’s name. 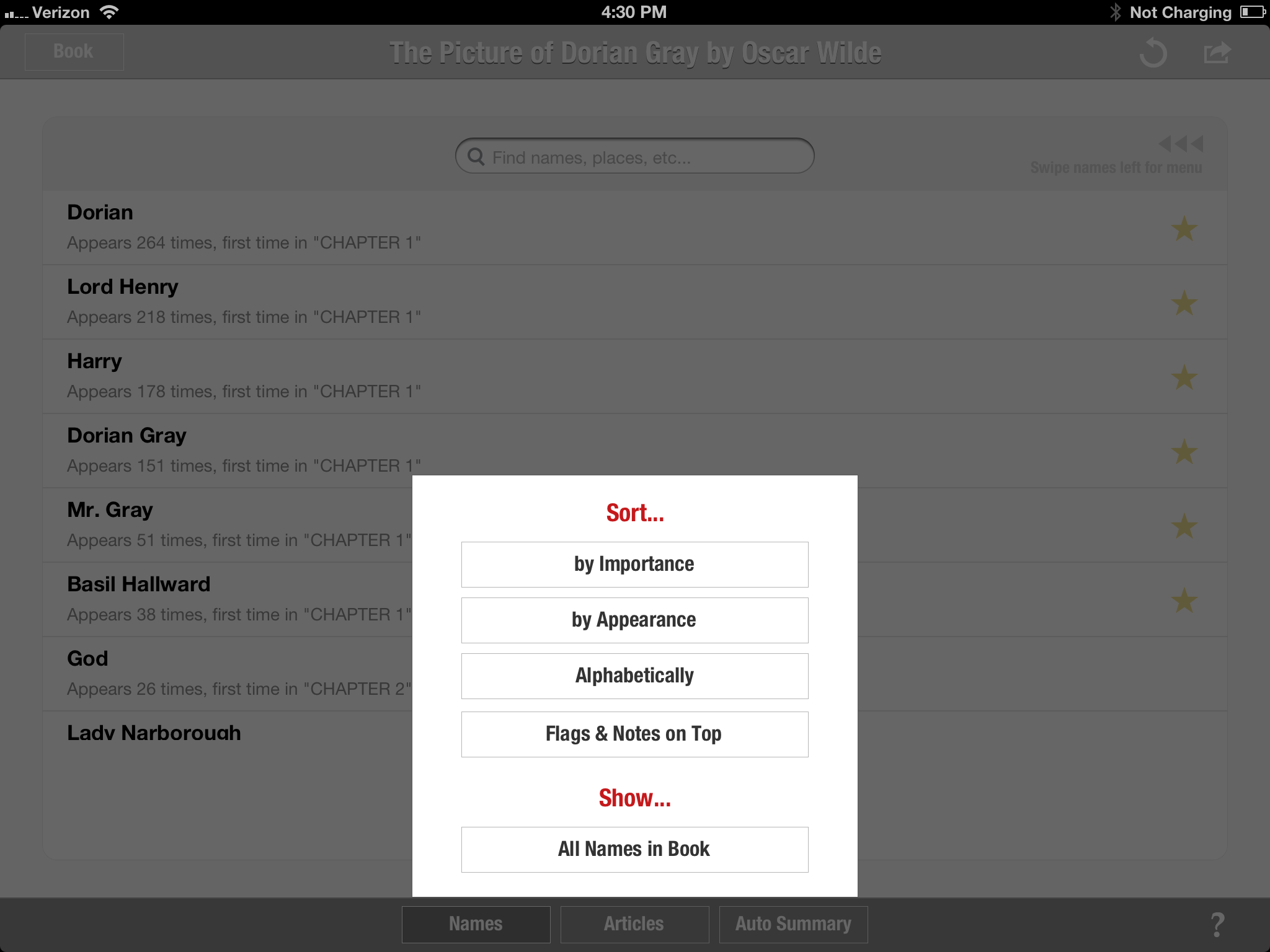 Marvin has a number of formatting capabilities that you can use to control line height, columns, body and heading typefaces, paragraph indentation, foreground and background color, margin width, justification, and hyphenation. You can also specify the text and background colors and assign them to any of three themes: a day theme, a night theme, and an “other” theme that might be useful for settings aimed at legibility in bright sunlight. You can easily switch between themes with a gesture, and then fine-tune the current theme’s
appearance by screen brightness, warmth, and tint using another set of gestures. In addition, you can make in-app purchases to change the basic appearance of Marvin; these items are also (confusingly) called Themes, and they control the look of Marvin’s various screens, panels, dialogs, and menus. 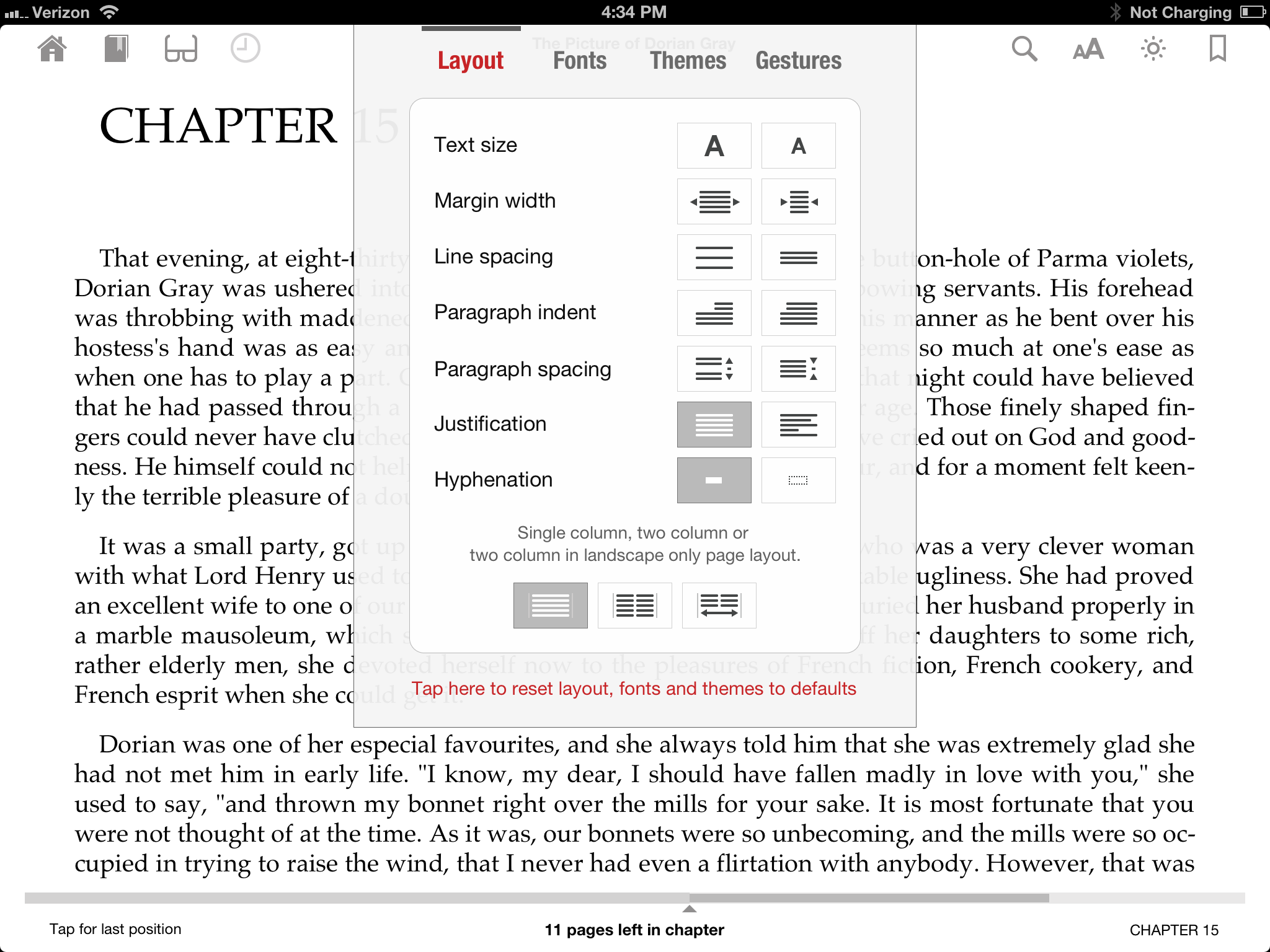 With all of its features and capabilities, one can easily get lost in Marvin, but, happily, the app comes with extensive context-sensitive help screens, and it includes a tutorial that guides you through all of its features, both basic and obscure. Marvin’s plethora of features, in fact, would make Marvin my preferred reader for DRM-free EPUBs, were it not for one serious drawback: Marvin’s page rendering capabilities are, at best, mediocre.

Take, for example, how Marvin displays the opening page of one DRM-free book that I own, J.K. Rowling’s “Harry Potter and the Sorcerer’s Stone.” Kudos, by the way, to Ms. Rowling for insisting that her books be sold without DRM, like our Take Control ebook series, which allows me to make the following comparison (book publisher Tor also took the DRM-free plunge last year, see “Tor Marks One Year of DRM-free Ebooks,” 30 April 2013).

As you can see, Marvin has more difficulty positioning and scaling the drop cap that opens the first paragraph than iBooks or the Nook app. Less obvious is the fact that Marvin does not display the page in the publisher’s chosen typeface for the ebook (Times New Roman), while iBooks manages that feat easily.

This inability to use a publisher’s specified typefaces is unfortunate, but, for most novels and non-fiction texts, it’s hardly a deal-breaker: not many ebook readers can (Nook also fails in this regard). What is a deal-breaker, for me at least, is how poorly Marvin deals with more complex layouts that involve things like bulleted lists, hanging indents, text blocks with colored backgrounds, and colored text itself. Take, for example, the following comparison between how the first page of my own “Take Control of iBooks Author” is rendered in the same three apps.

Notice how poorly Marvin handles the yellow background of the chapter opener, mangles the indentation of the bulleted list, adds far too much space around the headers, and ignores the color of the text headings and links. Even the Nook app, which ignores the book’s specified typefaces (Verdana for headings and Georgia for body text), gets the colors, indentations, and line spacing more or less right.

Granted, given how much control Marvin gives you over page layout, you could conceivably tweak its settings to make a complex book, such as any of our Take Control titles, appear acceptably, but you shouldn’t have to: an app as smart as Marvin should be able to detect publisher typeface choices and, whenever possible, use them, and it should be able to display bulleted lists and colored text correctly without user input.

If I used Marvin only for reading novels, biographies, and histories, it might well become my go-to ebook app. As it is, Marvin currently is one of those apps that falls into my collection of “useful but needs work” apps. But I’ll be keeping an eye on it — it’s the only ebook app I’ve seen to date that offers a toolset appropriate for serious readers.

Comments About Marvin the Intelligent Ebook Reader (Almost) Gets It Right