Apple has reported lower but still healthy profits for its third financial quarter of 2013. With revenue of $35.3 billion and a net profit of $6.9 billion ($7.47 per diluted share), the company’s profit is down 22 percent compared to the year-ago quarter. Even though revenue was up 1 percent from a year ago, margins were nearly 6 percent lower (36.9 percent, down from 42.8 percent), accounting for the reduction in quarterly profit. International sales accounted for 57 percent of Apple’s revenue in the quarter.

The brightest portion of the results, and one that was highlighted in the opening remarks, were the iPhone sales figures: 31.2 million iPhones were sold during the quarter, 5.2 million more than in the year-ago quarter, representing a 20 percent increase. On the other hand, iPad sales were down 16.4 percent year-over-year, with 14.6 million sold in the quarter compared to 17 million in the same period last year. It’s important to note that the third-generation iPad (the first with a Retina display) was released during that period, and Apple hasn’t released a new iPad model since October 2012. 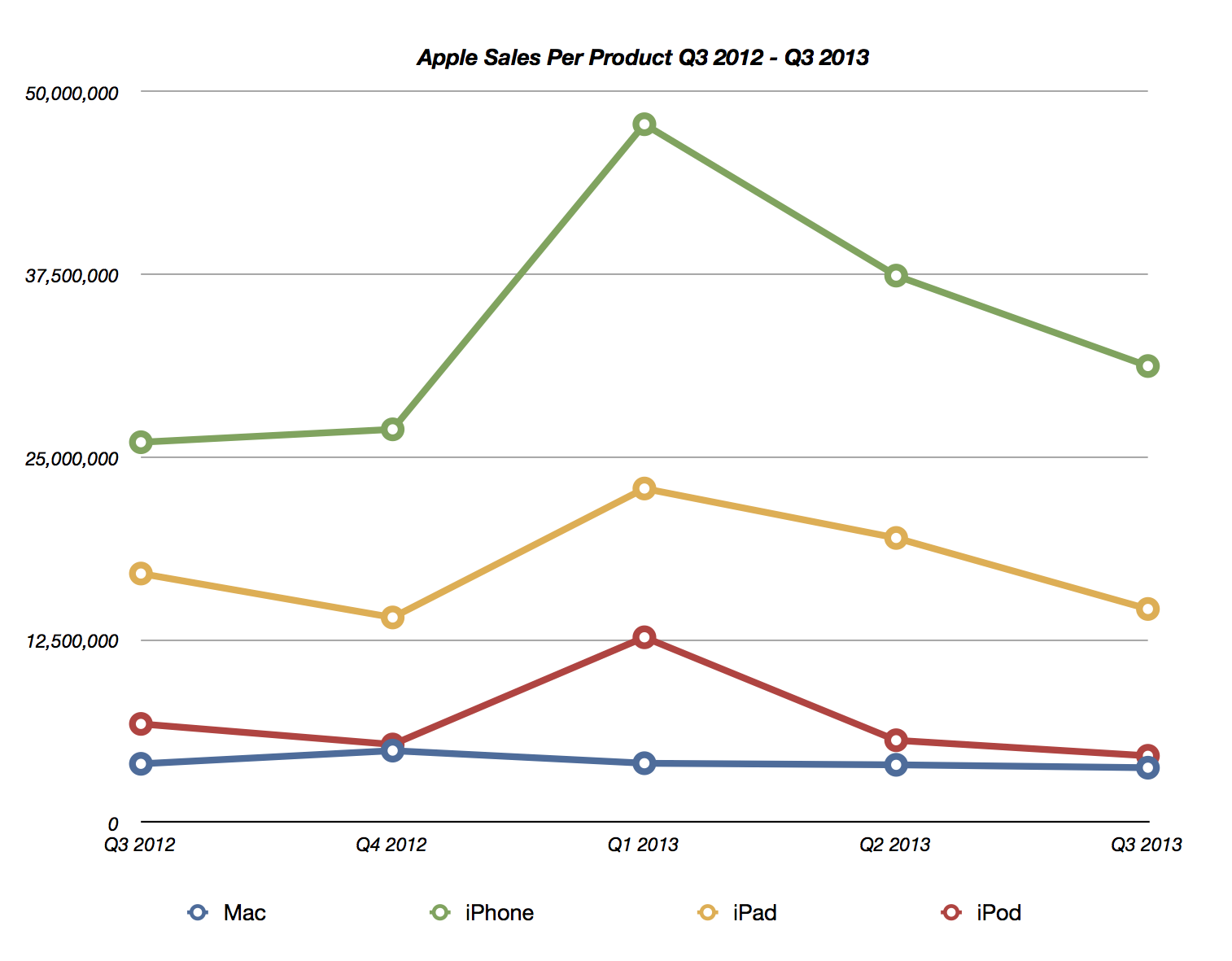 Mac sales also dropped slightly from the comparable quarter in 2012, to 3.8 million Macs from 4 million, a decline of 5.2 percent. This result, nonetheless, beat Apple’s own expectations and the general PC market trend, which showed an 11 percent drop in sales during the same period.

Apple’s cash on hand was a healthy $146.6 billion, up $1.9 billion from last quarter. The prepared announcement concluded with the declaration of the next dividend to stockholders: $3.05 per share to be paid on 15 August 2013.

Though the company reported lower iPad sales in the quarter, the news was not all dark on the tablet front: Apple reported that iPads accounted for a startling 83.4 percent of tablet Web usage (a point that was reiterated several times during the Q&A period with analysts). Perhaps not surprisingly, given the drop in that market, there was almost no discussion of iPod sales figures during the results call.

If the sales pitch during the results call last quarter was about how valuable Apple stock really was (see “Apple Q2 2013 Results Show Higher Revenues, Lower Profits,” 23 April 2013), the pitch during this call was about the value of the Apple ecosystem — a phrase heard frequently during the call. Ranging from discussions of the revenue generated by iTunes Store, App Store, and other services ($4.1 billion), through the number of movies and TV episodes downloaded (390 million movies and 1 billion TV episodes), to the amount of money paid out to developers ($11 billion, half of which has been paid out in the past year), Apple kept hammering home the importance of the ecosystem during
the call. Apple TV, the perennial Apple hobby, came in for its share of attention as well, with a litany of the media services that have been added recently to the set-top box’s repertoire (see “Apple TV Update Adds HBO GO, ESPN, and More,” 19 June 2013). Nor were cars left out: Tim Cook said that iOS in automobiles was “a key focus for us” and he regarded Apple’s automotive initiative as being comparable to other parts of the Apple ecosystem, such as Siri, Messages, and the app and media stores.

In a game that never seems to get old for analysts, several questioners tried to pry new product details and dates from the Apple representatives during the call. All such questions were deflected with vague statements like, “We are working up some stuff we’re really proud of.”

Increasingly, more of Apple’s revenue is coming from overseas — 57 percent in the third quarter, but revenue from China was down 43 percent from Q2 2013, which might be explained in part by China’s cooling economy. However, Cook said that Apple is seeing double-digit growth in iPad revenue in China, Japan, Canada, Latin America, Russia, the Middle East, and India. The iPhone’s popularity has exploded in India, where iPhone sales are up 400 percent. Developing markets are gobbling up the iPhone, with sales in Turkey and Poland up 60 percent, and sales in the Philippines up 140 percent.

Apple’s growth has plateaued — an inevitability for any massive company — but the rumors of its demise are greatly exaggerated. Despite a setback in China, Apple is still seeing huge growth overseas, with a new line of products and the holiday season still to come. Apple still brought in more revenue in its most recent quarter than Microsoft ($19.9 billion) and Google ($14.1 billion) combined. And with $146 billion in the bank, Apple could coast for years, even with no new products, much less innovations. But as this year’s WWDC keynote showed
— with promised new versions of iOS, OS X, and the Mac Pro — Apple isn’t resting on its laurels. Analysts and competitors, underestimate Apple at your peril. And, for those trying to paint Apple as a tottering behemoth about to crash to the ground, stop already. It just makes you look stupid.