Josh Centers here. As someone who now works with text all day, every day, readability has become paramount to me. That’s why, not long after I began here at TidBITS, I became obsessed with the combination of the Solarized color schemes, paired with the Nitti Light typeface, as highlighted by bloggers Justin Blanton and Ben Brooks.

Solarized is a pair of color schemes, one light, one dark, designed by Ethan Schoonover to minimize eye strain. They were designed around CIELAB hues and a fixed color wheel, to minimize contrast and maximize symmetry.

How do these colors help? One of the main causes of eye strain is high contrast. Traditional black text on a white background, while easy to read, is harsh on your eyes, especially with today’s ultra-bright displays. Solarized smooths out the transitions between colors and brightness, while still making individual elements, like markup tags and colorized URLs, easy to distinguish.

You can download preconfigured Solarized themes for many popular apps from Schoonover’s site. Included in the package are themes for BBEdit, Vim, Emacs, TextMate, Terminal, and even a palette for Photoshop so you can create your own designs. (Be sure to look at the Read Me files for each app for installation instructions.) A few apps also have built-in Solarized themes, such as the Ulysses III writer’s environment for the Mac, the Writing Kit Markdown text editor for the iPad, and the iPad RSS reader Mr. Reader.

The Nitti Light typeface was popularized by the minimalist iA Writer text editor for iOS and Mac, developed by Information Architects. The app has no options, so you’re stuck with writing in Nitti Light. While that’s an opinionated choice, a lot of thought went into it, as is evident if you read the company’s 2,400-word thesis on the matter. Long story short, Information Architects chose Nitti Light because they believe it maximizes readability, and sets the proper tone for users writing a first draft. You may not agree with them, but in the endless arguments over which font is “best” for writing, they have a lot of
ammo.

However, iA Writer is a limited app. No options, few features, and there’s no way you can use Solarized with it. However, you can purchase the Nitti Light typeface yourself from Bold Monday. The bad news is that it costs €59, which as of this writing is nearly $78. That’s more expensive than BBEdit itself!

However, there is hope for those on a budget. Google Fonts offers the Cousine typeface, designed by Steve Matteson, for free. Cousine is similar to Nitti Light, though it’s thicker, less crisp, and less detailed. (The first screenshot below compares the two typefaces, with Nitti Light on top and Cousine on the bottom.) To install Cousine, if you haven’t used Google Fonts before, click the “Open Cousine in Google Fonts” link at the top of left of the specimen page, and refer to the numbered steps in the second screenshot for download instructions. Once you expand the Zip archive, double-click the font(s) to open them in Font Book, and then click the Install Font
button. 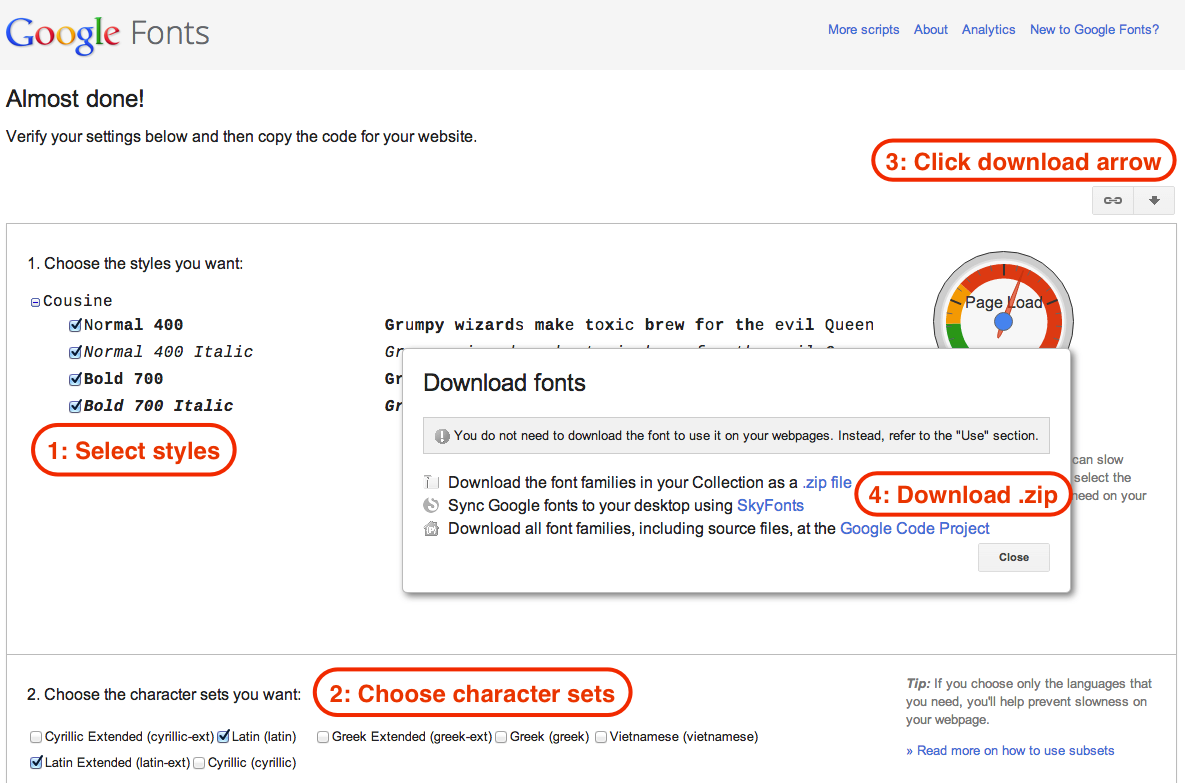 In any case, professional writers often prefer a fixed-width, or monospaced, typeface for tapping out drafts. As opposed to variable-width typefaces like Times New Roman and Helvetica, each character in a monospaced typeface takes up the exact same width on the screen, making individual characters easier to
distinguish. The most famous monospaced typeface is Courier, which resembles type from a typewriter, and is still the standard in manuscripts and screenplays today.

I’ve implemented the combination of Solarized and Cousine everywhere I can since I started at TidBITS, and I’ve been pleased with the results. The combination has been easy on my eyes, and although it’s impossible to separate out all the variables, I feel as though I’m making fewer typos and misspellings.

But my opinion is just that: opinion. To put this setup through the wringer, I turned to a friend of TidBITS for whom readability isn’t just a luxury, it’s a requirement: accessibility expert Steven Aquino. If you’re not familiar with Aquino, he’s made a career out of writing, despite being legally blind. I couldn’t think of a better person to test this setup, so I introduced him to the combination of Solarized and Cousine and asked him to try it for a while. Take it away, Steven!

Looking Dimly at Solarized/Cousine — Thanks, Josh. Steven Aquino here. Since discovering Markdown a few years ago (see “With Markdown, Even the Blind Can Write,” 18 June 2013), I’ve tried several text editors for Mac OS X and iOS, including iA Writer and Byword from the Portugal-based development house, Metaclassy. I preferred Byword for its light and dark modes, which I switched between during the day and night, respectively. I paired those themes with the Courier Prime typeface, which is a customized version of the fixed-width Courier typeface optimized for screenwriters.

Over the last few months, however, I have transitioned away from using Byword for my long-form writing. Instead, I’ve embraced The Soulmen’s Ulysses III on the Mac and its iOS sidekick, Daedalus Touch. I love these apps because they nail readability.

In Ulysses, I had been using the Courier Prime typeface, pairing it with the Solarized Light theme. Unfortunately, Courier Prime isn’t available in Daedalus, so I use the only fixed-width typeface available: Meslo LG, also against a sepia background. In both cases, I have found these setups comfortable to use and very readable.

At Josh’s urging, I changed the default font in Ulysses to Cousine, while keeping the Solarized Light color scheme. 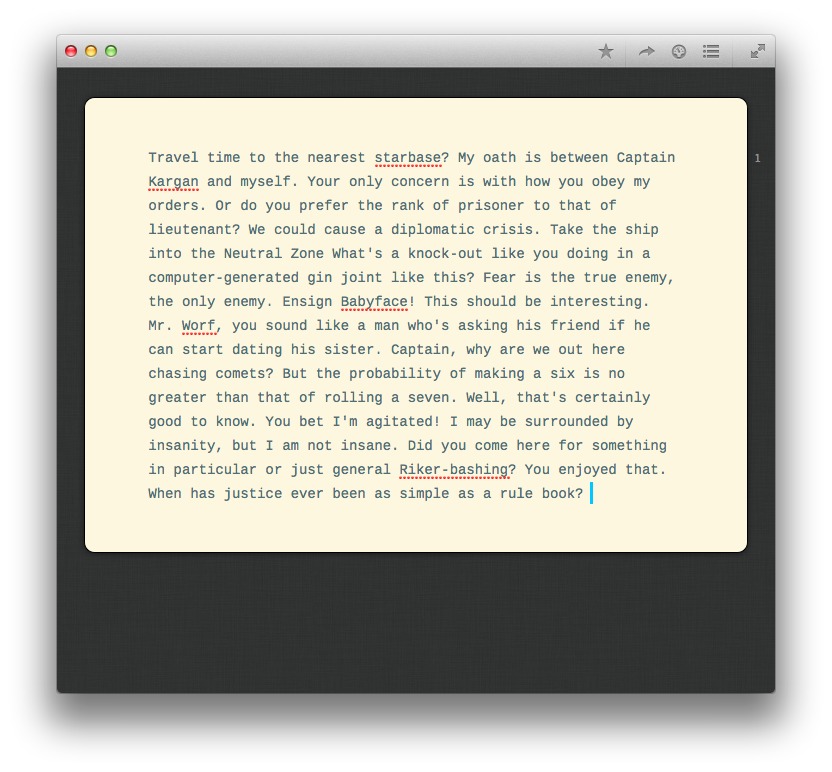 After using this setup for the last couple weeks, I can say with confidence that the combination of Cousine and Solarized Light is great for writing. More importantly, as a visually impaired person, I find the combination to be extremely comfortable for my eyes. Between Cousine’s clean design and the contrast of the background, I’m experiencing considerably less eye strain than normal. While nothing will ever completely eliminate my ocular fatigue and pain, less eye strain means I can write more — eye
strain is the limiting factor for how many hours I can spend at the keyboard. Simultaneously, the more comfortable writing is for me, the easier it is for me to concentrate on what I’m writing, rather than the mere act of looking at the screen.

In iOS, Daedalus Touch doesn’t incorporate the true Solarized theme, and Cousine is unavailable as a system font. But the approximation I’ve cobbled together with Meslo LG and the sepia background is nearly equivalent. Meslo is not quite as nice as Cousine, but it is similarly comfortable to use. 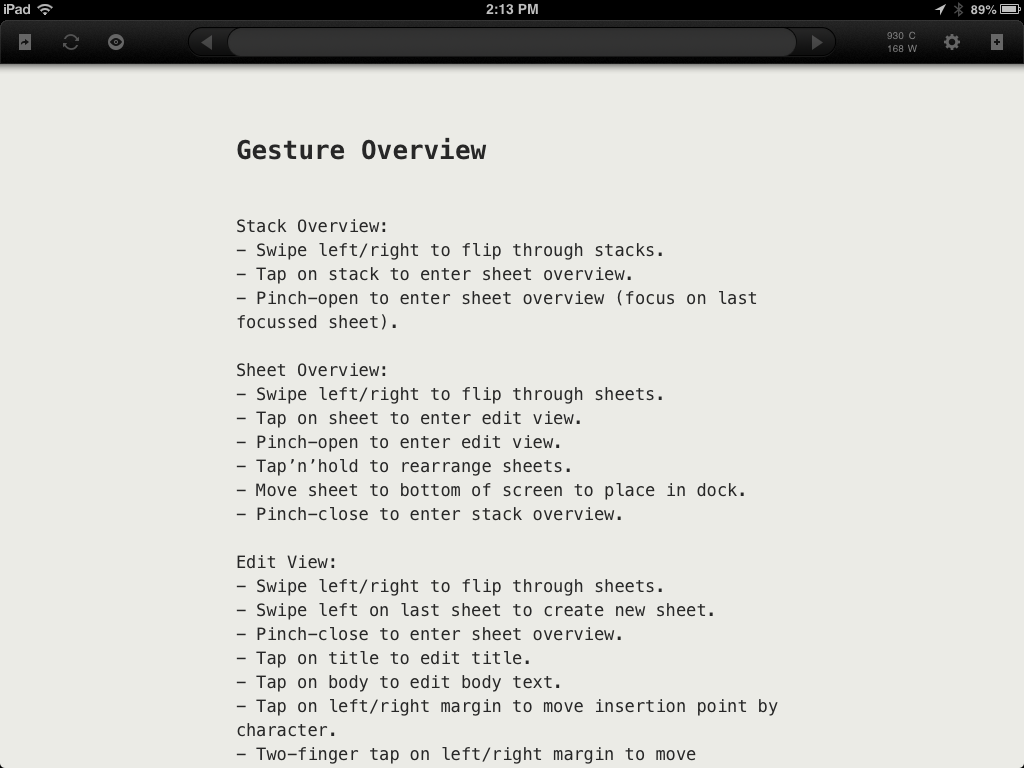 Using Ulysses marked the first time I had been exposed to the Solarized theme, and it has made a surprisingly significant difference to me. The best part is the contrast between the typography and the background. Words seem to pop off the page, and they’re easy to discern, even for me. Moreover, the bluish hues given to hyperlinks are wonderful because I can instantly see at a glance what is plain text and what is a link. Markdown formatting also receives a subtle grayish hue, which nicely differentiates text from formatting, while
avoiding the mistake of garishly over-colorizing the formatting characters. These details, while no doubt a treat for those with normal vision, are a big deal to someone with a vision impairment like myself.

Because of my positive experiences with Solarized and Cousine, this setup — inside Ulysses and Daedalus — will be my standard writing environment for the foreseeable future. Not only are the setup and the apps beautiful and feature-rich, but they’re designed in such a way that a visually impaired writer like myself has less trouble getting the creative juices flowing. Thanks to Josh for turning me on to the combination, and I’ll pass the keyboard back to him now.

Final Thoughts — As our pal Steven demonstrates, the choice of typeface and color can have a profound impact on both comfort and productivity. So give Solarized and either Nitti Light or Cousine a try in your own workflows. Even if they don’t suit your tastes perfectly — everyone’s vision is different! — take the time to experiment with colors and typefaces to find a combination that works for you. Your eyes will thank you.

Have your own preferred visual setup for writing? Tell us about it in the comments!

Comments About Make Text More Readable with Solarized and Cousine