In all the fuss surrounding Apple’s loss in the antitrust lawsuit filed against the company by the U.S. Department of Justice and 33 states (see “Explaining the Apple Ebook Price Fixing Suit,” 10 July 2013), it was easy to forget that Apple and five major publishers were also under investigation by the European Commission for the same activities. The concern was exactly the same, that Apple and the publishers conspired to create a situation that caused ebook prices to rise.

However, unlike in the United States, Apple and the five publishers ended up settling by offering legally binding commitments to address the European Commission’s concerns. Remember that these commitments apply only to business that takes place within the European Economic Area.

Although you’ll notice the date on that memo was 13 December 2012, Apple just this week informed iBookstore publishers that it would not be applying or enforcing the MFN clause in the iBookstore Distribution Agreement. If you remember, an MFN, or most-favored-nation, clause enables the retailer to match a lower price offered by a competitor, regardless of what other pricing agreement may be in effect. 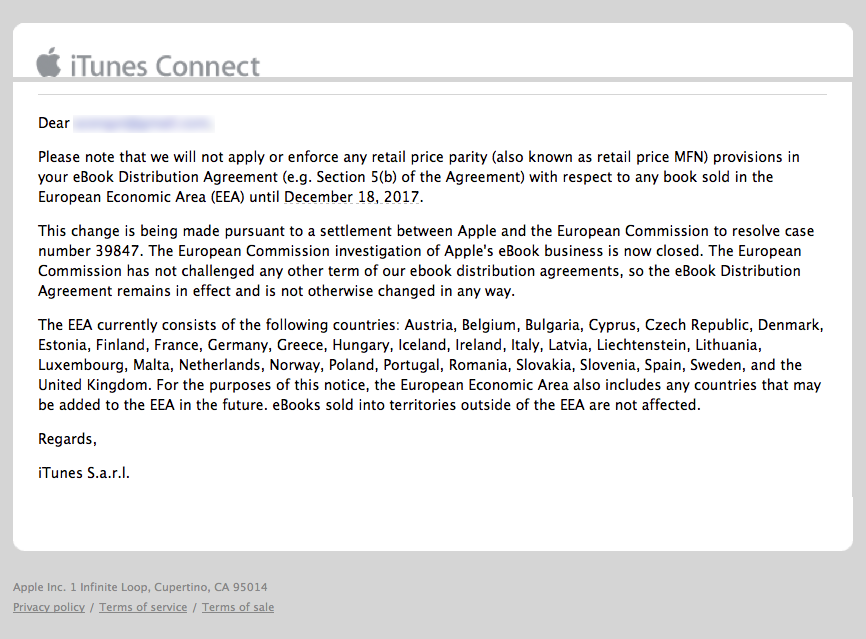 Although the European Commission proceedings never came to trial, and the decision to accept commitments from Apple and the publishers explicitly does not take a position on the compatibility of the agreements with European Union antitrust law, it’s interesting nonetheless that Apple settled with the EU rather than fighting the case in court, as it did (and continues to do — see “DoJ Proposed Remedies in Ebook Price-Fixing Suit Miss the Point,” 7 August 2013) in the United States.