Over the years, Apple has shown a strong commitment to accessibility in iOS, improving on it with each major version of the operating system. This year is no different, as iOS 7 adds accessibility options — such as Dynamic Text and Increase Contrast — that are sure to be appreciated by users who rely on such capabilities to interact with their iOS devices. Being legally blind, I appreciate them, so follow along as I share the most noteworthy of iOS 7’s vision-related features.

Dynamic Type — One of iOS 7’s marquee features is Dynamic Type, which enables you to resize text, at least in apps that support it. To change the text size, go to Settings > General > Text Size and adjust the slider to your liking. It may take some time before most non-Apple apps support Dynamic Text, but a few apps have jumped on board early, such as the latest version of the Digg newsreader. 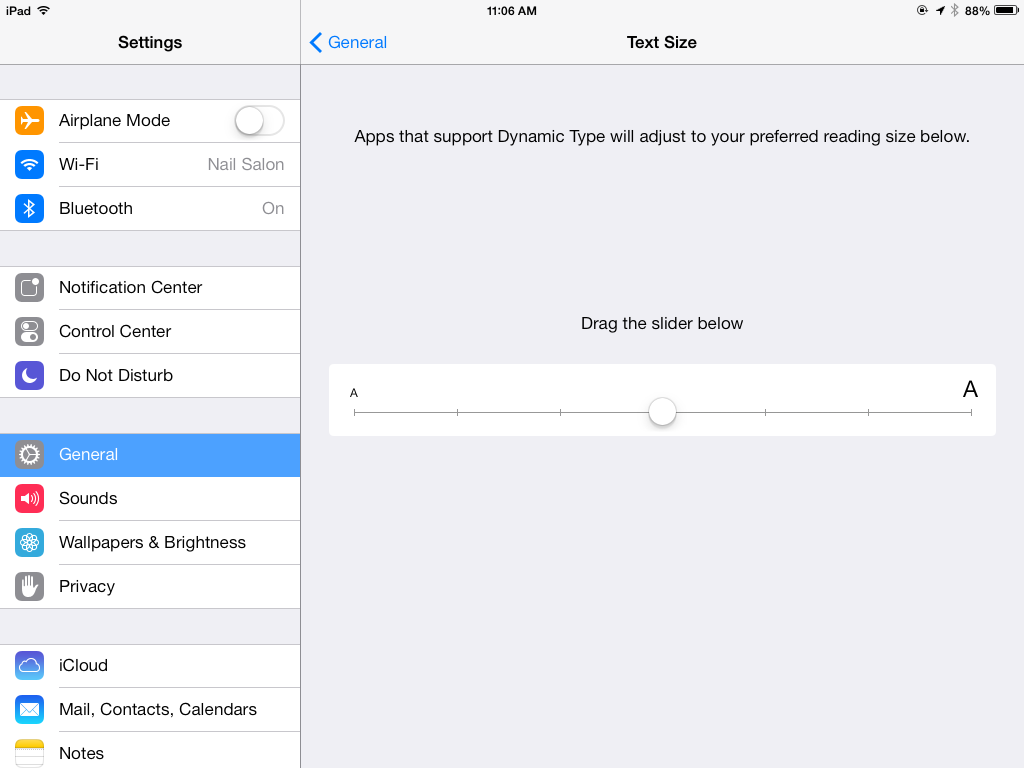 If you need even larger text, iOS 7 has you covered, with Larger Dynamic Type, a reworking of the Large Text feature in iOS 6. As its name implies, Larger Dynamic Type lets users adjust font sizes beyond what’s allowed in the Dynamic Type setting. To enable it, go to Settings > General > Accessibility > Larger Type, flip the switch, and drag the slider until you’re happy with the text size. 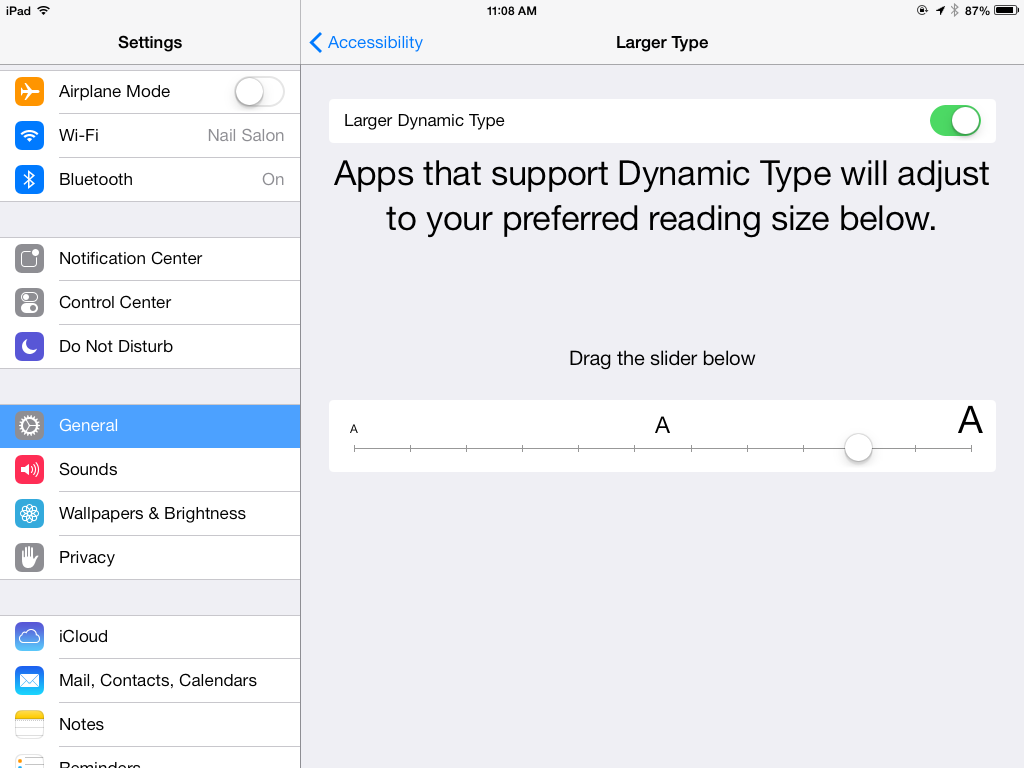 While I appreciate Larger Dynamic Text, I prefer the iOS 6 interface for setting it. In that version, Large Text presented users with size options ranging from 20 point (where I like it) all the way up to 56 point, with graphics illustrating the change in size. The explicitness of the point sizes and the pictures of the corresponding letters made it easier for me to gauge my settings. In iOS 7, Apple has done away with the numerical size ranges. It took me longer to measure the slider notches to find the setting I was most
comfortable with than it did with the old system. You wouldn’t think that an Accessibility option would become harder to use, but the new slider in iOS 7 is just that. 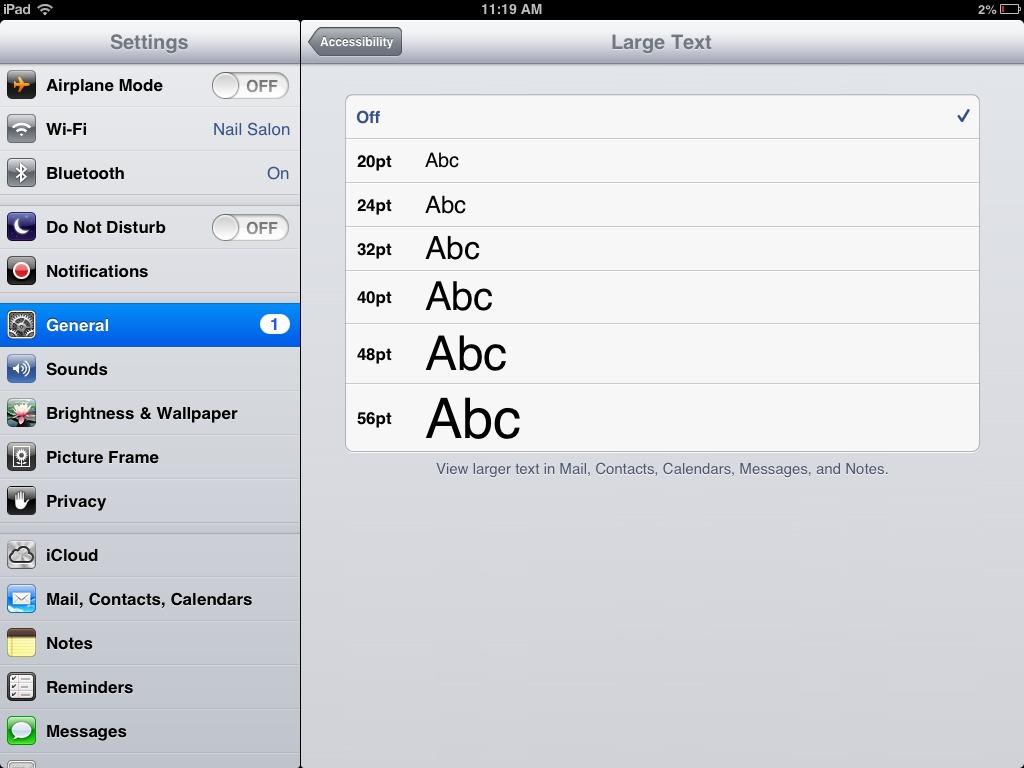 Despite this annoyance, one of the aspects of iOS 7 that I appreciate, accessibility-wise, is its redesigned typography. The new typography is so readable and the overall user interface so clean that I can use smaller text sizes, and still be comfortable enough to read without too much eye strain. I have the Larger Dynamic Text slider set just to the left of middle, and it works great. However, be sure to read the comments on this article, since others having more trouble.

Bold Text — iOS 7’s Bold Text feature is a one-trick pony: it makes all system-based text bold-faced. From texts to email messages to menu items, any text that is rendered by standard system calls becomes bold, although apps that use custom text rendering aren’t affected by it. I presume that Apple added this feature because text in iOS 7 is thinner and lighter than in iOS 6 (at least it got thicker during the beta period, or we would really have been in trouble).

To enable Bold Text, open Settings > General > Accessibility, and flip the Bold Text switch. You must then restart your device to finish enabling it, a strange and unwieldy requirement that’s entirely unlike Apple. 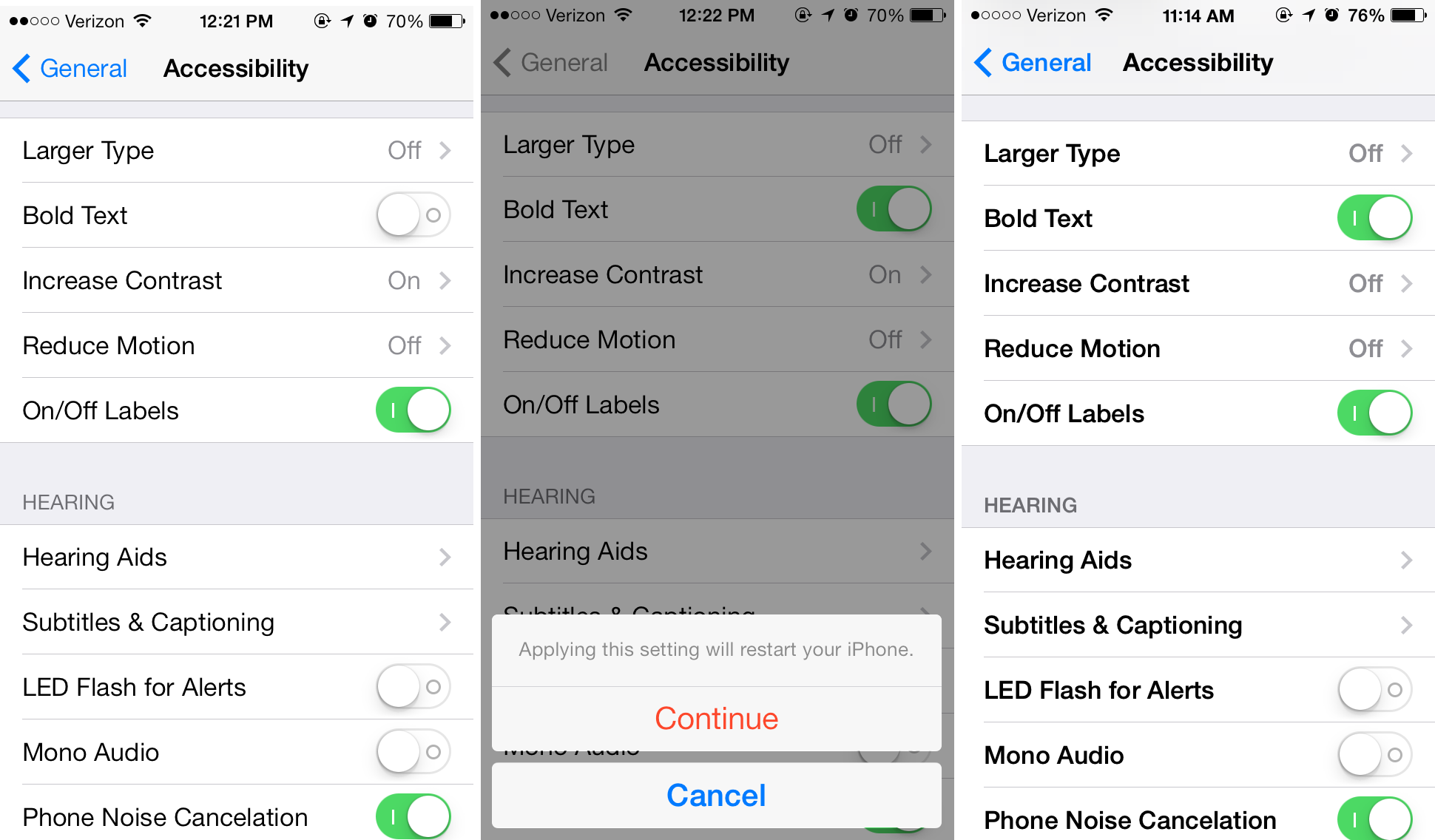 In my testing, I found Bold Text to be quite nice, although I won’t be using it full time. The main problem I found is that it seems to eliminate any differentiation between headers (which would already have been bold) and normal text. For instance, I found messages in Mail harder to read with Bold Text on because, to my eyes, the message metadata (sender, subject, etc.) blended in with the body of the message itself, and I found it off-putting.

Thanks to this loss of certain typographic distinctions and the annoyance of having to restart my device, I won’t be using Bold Text. But my vision is just good enough to get away without it; for others it may be essential.

Increase Contrast — Compared to iOS 6, iOS 7 has markedly lower contrast — the degree of difference between colors. One of the hallmark changes in iOS 7’s visual overhaul is the use of translucency. For example, look at Control Center; if you’re in Messages and swipe up to reveal Control Center, you’ll see a faint blue or green hue underneath, coming from the obscured message bubbles.

While the translucency certainly looks spiffy and, as Jony Ive says, can give users a sense of context, the lack of contrast can be troublesome to many visually impaired users. Acknowledging this problem, Apple has added an option to increase contrast, which it does by removing the blur effect from things like Control Center, Notification Center, and keyboards in order to increase legibility. 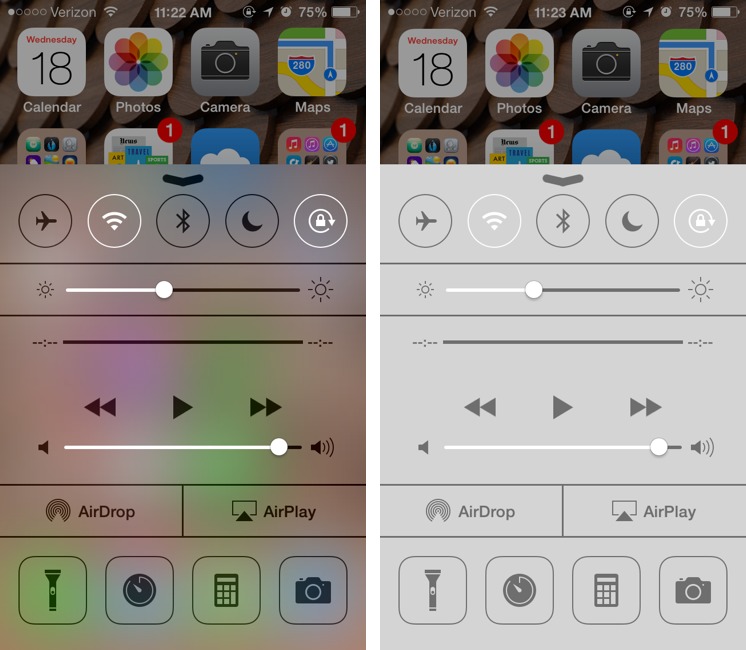 I like the translucency, aesthetically, and find that it doesn’t negatively affect my vision. As with Bold Text, I don’t feel a need to use Increase Contrast. On the other hand, while TidBITS publisher Adam Engst has roughly normal vision, he finds random colors bleeding through Control Center and Notification Center distracting and thus quite likes the Increase Contrast option. And a number of commenters have expressed significant problems with the keyboard, even with Increase Contrast turned on.

Reduce Motion — iOS 7 features subtle parallax 3D effects that give an illusion of depth to the Home screen, Safari’s tab view, and other interface elements. If you find this distracting, you can turn it off in Settings > General > Accessibility > Reduce Motion.

By turning on Reduce Motion, you can rid yourself of the parallax effect, as well as “reduce the motion of the user interface,” whatever that means. Although it does eliminate the parallax effect, as far as I can tell, enabling Reduce Motion on my iPhone 4S did nothing to stop fancy transitions like the icons swooping in to fill the Home screen after unlocking the Lock screen. That’s fine with me, however, since I happen to like the animations and don’t find them visually distracting. As for the parallax effect, I don’t tend to notice it, so I couldn’t tell any difference.

On/Off Labels — In what may be one of the worst design changes from iOS 6, the heavily used On/Off switches in iOS 7 are far less visually and functionally accessible.

Say what you will about skeuomorphism, but from an accessibility standpoint, the On/Off switch was one of the best visual elements of iOS, and I dearly miss it in iOS 7. The switch used not only color (blue) to indicate an enabled setting, but also a clear text label that reported both On and Off states. Plus, each switch was visually indented, which gave it a useful visual separation from the rest of the interface.

In iOS 7, setting switches are just nubs that slide to the right and turn green if enabled, but are otherwise left-aligned and white when disabled. By default they have no text labels at all — an odd decision for a redesign that has often traded graphical buttons for textual buttons. Because they don’t need room for the On and Off words, they’re also much thinner than in iOS 6, making them a smaller target that’s harder to hit accurately.

You can make this a little better by enabling On/Off Labels in Settings > General > Accessibility. Once enabled, you’ll also see a small visual glyph to help distinguish whether a setting is on or off: a vertical line if on and a circle if off. 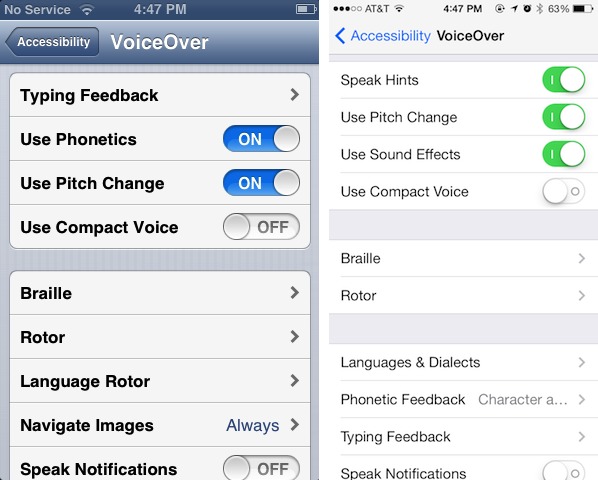 This choice may be a nod to iOS’s ever-increasing acceptance internationally, since the glyphs are the International Electrotechnical Commission’s symbols for power on and power off.

For many of us, these symbols aren’t nearly as clear as in iOS 6, which plainly stated, in text, whether a setting was “On” or “Off.” To the visually impaired, such obvious cues are important because one’s vision might not be strong enough to detect only color or tiny symbols that masquerade as labels.

Apple’s design in this regard is disappointing. I have the labels turned off, since they don’t help enough to bother, and I see these switches as one of the worst aspects, accessibility-wise, of iOS 7’s redesigned user interface. I can only hope that more explicit labeling along the lines of iOS 6 is brought back in a future update.

A Last Look — Because of its radical visual facelift, iOS 7 is, in my mind, the most significant change we’ve seen to the operating system, not only for normal-sighted users, but also to visually impaired users like myself.

The specifics are a mixed bag, with some design changes helping those with normal vision (or at least offering a different aesthetic) while potentially causing problems for people like me. But, simultaneously, it’s clear that Apple was aware that the new interface could be jarring or difficult for the visually impaired, and took pains to add these vision-focused features to iOS 7’s Accessibility settings to compensate. Whether they’re entirely successful is another question, but Apple should still be applauded for this effort, since it shows the company’s commitment to delivering products that are usable by everyone.

The On/Off label travesty notwithstanding, I feel the new visual Accessibility features are generally implemented well, and will be appreciated by many, ranging from those of us who are legally blind to people who just don’t see as well as they used to. Regardless of where on the vision spectrum your eyes fall, take a few moments to explore these various options to see how they might improve your experience with iOS 7.

Comments About Peering at iOS 7 for the Vision Impaired