Nisus Writer Pro 2.0.6 and Express 3.4.5 — Nisus Software has released Nisus Writer Pro 2.0.6 and Nisus Writer Express 3.4.5 with a number of minor improvements and fixes to both editions of the word processing app. The updates now enable you to override list styles to set a starting list number for a single paragraph, improve stability with fixes for a variety of crashes (such as importing or pasting content with nested tables), and make several enhancements to palette stepper behavior. The Pro edition also fixes an issue with failed imports of documents with floating content, and speeds up the
rebuilding of generated indexes and the opening of documents with many tables in Draft View. Note that as of this writing neither Nisus Writer Pro or Express have been updated in the Mac App Store, but the Nisus blog hopes the wait won’t be too long. (Nisus Writer Pro: $79 new, free update, 179 MB, release notes. Nisus Writer Express: $45 new, free update, 51.1 MB, release notes.)

Yojimbo 4.0.1 — Bare Bones Software has released Yojimbo 4.0.1, squashing a number of reported bugs following the information organizer’s recent major update (see “Yojimbo 4.0 Adds Syncing… But Not Via iCloud,” 14 August 2013). The release makes some account-related adjustments (for instance, enabling you to see if you’ve successfully entered the code for the monthly syncing subscription), fixes a bug where using the Duplicate command would “result in havoc” following a sync, and resolves a problem where items synced to Yojimbo for iPad would occasionally
be unreadable. (Speaking of which, Yojimbo for iPad has been updated to version 1.1.1 with enhancements for iOS 7.) Additionally, the release notes include details on what to do should an old version of Missing Sync for Windows Mobile prevent a database migration from being completed. ($30 new, $20 upgrade, free update from version 4.0, 7.7 MB)

SMC Firmware Updates for MacBook Pro, MacBook Pro Retina, and MacBook Air — Apple has released three System Management Controller (SMC) firmware updates for its MacBook lineup: MacBook Pro SMC Firmware Update 1.8 (703 KB; mid-2012 models), MacBook Pro Retina SMC Firmware Update 1.2 (712 KB; mid-2012 models), and MacBook Air SMC Update 1.9 (1.09 MB; mid-2012 and mid-2013 models). All three address battery-related issues, where your system could hang or the battery could stop functioning altogether if the battery level goes
below 1 percent. The MacBook Air SMC Update also throws in a solution for the possible problem of the system not recognizing the battery when it goes below 1 percent. As always with firmware updates, we recommend relying on Software Update or the App Store app to ensure you get the firmware update for your specific model, and be careful not to interrupt the update process. (Free)

OS X Mountain Lion 10.8.5 Supplemental Update — Apple has released OS X Mountain Lion 10.8.5 Supplemental Update with a couple of sleep-related fixes, including a bug that could cause external drives to be ejected after your Mac goes to sleep and a problem that prevented HDMI audio from working after wake from sleep. The supplemental update also fixes an issue that prevented some applications from accessing the FaceTime HD camera on mid-2013 MacBook Air models and a bug with USB Bluetooth adapters. It’s available as a direct download from Apple’s Support Downloads Web page or via the Mac App Store. (Free update, 18.7
MB)

iTunes 11.1.1 — Apple has released iTunes 11.1.1, a small maintenance release that solves a few nagging problems that bedeviled some users. In addition to improving stability (a promise made with each new update), iTunes 11.1.1 fixes a bug that could cause movies with iTunes Extras to display incorrectly and a problem with deleted podcasts. It’s available as a direct download from Apple’s iTunes Web page, via Software Update in Mac OS X 10.6 Snow Leopard, or via the App Store app in 10.7 Lion or 10.8 Mountain Lion. (Free, 215 MB)

Dropbox 2.4.1 — With a focus on adding a couple of new image-related features, Dropbox has released version 2.4 of its eponymous file synchronization app (it should auto-update, but as always, if it doesn’t, you can download manually).

The first time you take a screenshot using a standard Mac keyboard shortcut, Dropbox offers to save that screenshot and all future captures into a Screenshots folder within Dropbox. (This works only if you use a Mac screenshot shortcut, not with screen capture utilities like Snapz X Pro, though such utilities can generally save into any specified folder.) In addition to saving the image file, Dropbox also copies a link to that screenshot into your clipboard. The screenshot capability can be controlled via the new Import pane in Dropbox’s preferences.

Dropbox 2.4 also makes it easier to move photos from iPhoto (version 7.0 and higher) to Dropbox with an importer, controls for which you’ll find in the same Import preference pane. A top-level folder named “Photos from iPhoto” will be added to your Dropbox, and your photos will then be organized into subfolders according to the events in your iPhoto library. As a bonus for using this space-hungry feature, Dropbox will add up to 3 GB of storage to your account. 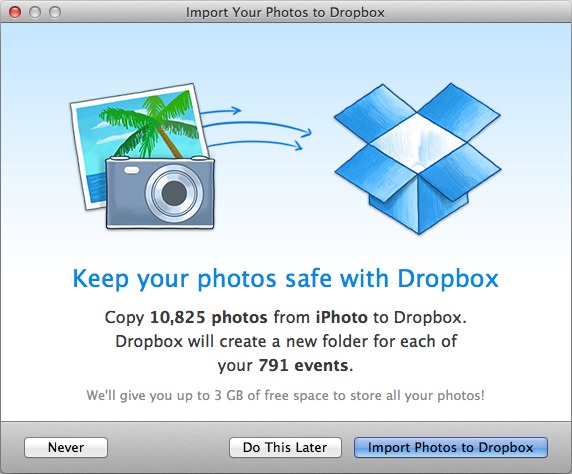 Finally, the update adds a Move to Dropbox item to the contextual menu when viewing “most files and folders” outside your Dropbox folder, and it is officially ready for OS X 10.9 Mavericks. A quick update to version 2.4.1 fixed a bug related to the screenshot feature and rearranged the Move to Dropbox contextual menu item. (Free, 30.6 MB, release notes)