Apple has yet again reported lower, yet still healthy profits for the company’s fourth fiscal quarter of 2013. With revenue of $37.5 billion and a net profit of $7.5 billion ($8.26 per diluted share), the company’s revenues are up slightly, but profit is down 8.5 percent compared to the year-ago quarter. (For a comparison against last quarter’s results, see “Apple Q3 2013 Results Repeat Higher Revenues and Lower Profits,” 23 July 2013.)

Despite a year-over-year increase in revenue of $1.5 billion, lower margins are still holding back profits. Gross margin for Q4 2014 was 37 percent, roughly the same as the last quarter, but down from 40 percent a year ago.

In the quarterly earnings call, CEO Tim Cook gave four reasons for depressed margins: currency fluctuations, more deferred revenue, higher cost of products, and lower prices — especially in the case of the new MacBook Pro and iMac computers. (For more on how Apple’s products could be hurting their margins, see “The Case for a Low-end Plastic iPhone,” 24 July 2013, which accurately predicted the iPhone 5c.)

The subject of deferred revenue came up often in the investor call. As it turns out, giving away OS X 10.9 Mavericks, iWork, and iLife is hurting Apple’s margins by forcing the company to defer an additional $900 million in revenue this quarter. Never say Apple doesn’t do nice things for its customers!

The good news is that the iPhone had a record fourth quarter, selling 33.8 million units, compared to only 26.9 million in the year-ago quarter. However, sales of Apple’s other products — the Mac, iPad, and iPod, remain flat. Mac sales were down 6 percent to 4.6 million (from 4.9 million a year ago), which isn’t as bad as some had speculated, and is better than the 9 percent year-over-year decline in global PC sales. The iPad did a little better, increasing from 14 million units in the year-ago quarter to 14.1 million. However, Cook seems confident that new iPad models will boost sales, saying that he thinks it’s going to, “be an iPad Christmas.” 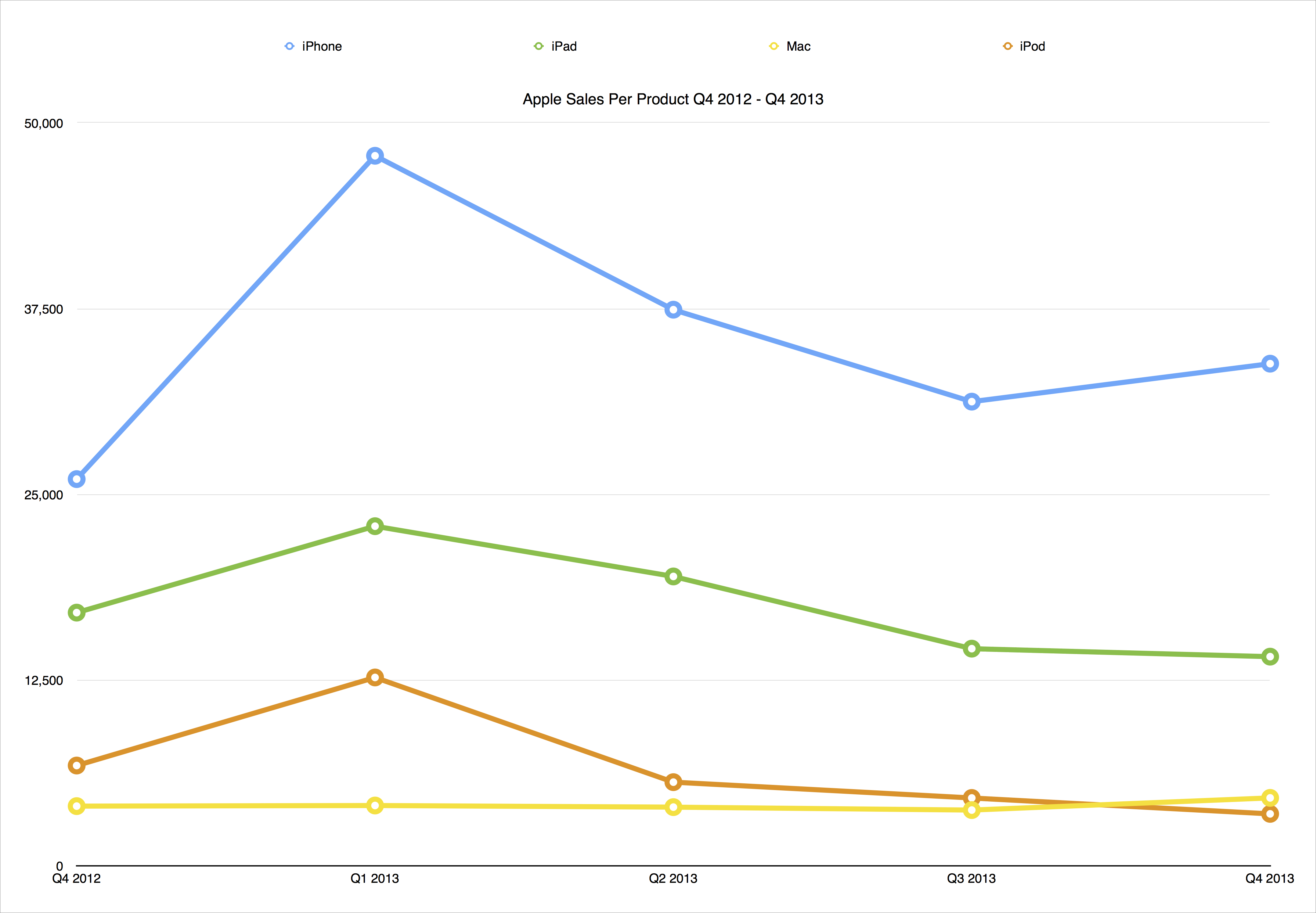 Apple’s cash on hand also remains flat at $146.8 billion compared to $146.6 in Q3. Over 76 percent of that is now offshore, which is apparently helping Apple keep its low tax rate of 25.9 percent, but, as CFO Peter Oppenheimer suggested, could limit the company’s share buyback program (for more on Apple’s messy offshore tax dodge, see “Apple Grilled Over Tax Practices,” 24 May 2013).

Speaking of buybacks, Apple has been under intense pressure from billionaire mega-investor Carl Icahn to blow almost all of its cash on stock buybacks. Cook seemed to have an answer for Icahn, who has insinuated that Apple could be doing more for its shareholders, in his opening remarks, noting that Apple had returned over $36 billion to shareholders in the past five quarters alone.

Cook said a number of interesting things during the call: that the iPhone 5c is considered a mid-tier phone and was never intended to be cheap, that future versions of OS X would be free, and that the iPad mini with Retina display will be released in late November 2013, though he hinted at constrained supplies. Cook said he knew how many iPads Apple could make, but didn’t know how high demand will be.

As we saw last quarter, Apple’s big growth is happening overseas, in countries like Russia, Saudi Arabia, and India. The iPhone saw a 25 percent increase in Chinese sales from a year ago.

Once again, it looks like Apple’s growth has stagnated. But when you’re one of the richest companies on the planet, with the most profitable PC business, the most popular tablet, and with a retail chain that makes more money per square foot than Tiffany, where do you go? As always, Cook hinted at new product lines, but what else is needed? A watch? Neat, but no one’s clamoring for it. A TV set? What could it do that the existing Apple TV can’t? And it’s not like financial results from Microsoft, Samsung, and Google are knocking Wall Street off its feet these days either. As it turns out, it truly is lonely at the top.

2013 Financials Apple Financials Apple Inc. Q4 Financials Tech News
Cookies & Privacy: We wish we were talking about chocolate-chip cookies here, but our Web site—like nearly all others—relies on a few minor digital cookies. Various laws around the world require us to tell you that fact, so consider yourself informed, if not nourished. By continuing to use this site, you agree to our use of these cookies. Cookie and Privacy Notice