Apple has reported higher than expected profits for nearly all of its products for its Q1 2014 fiscal period. With revenues of $57.6 billion and net profits of $13.1 billion ($14.50 per diluted share, a new record), the company’s revenues are up 6 percent compared to the year-ago quarter (see “Apple Q4 2013 Results See Lower Profits Again,” 28 October 2013, for the previous quarterly results).

With the exception of the iPod line, which, to no one’s surprise, continues to decline in sales (down 52 percent over last year), every device that Apple makes saw increased sales over the year-ago quarter. Still, even iPods brought in some money: nearly a billion dollars in revenue (every billion counts, you know). iPod sales, of course, were dwarfed by iPhone sales (51 million sold, bringing in almost $32.5 billion) and iPad sales (more than 26 million sold, directing $11.4 billion into Apple’s overflowing coffers). Mac sales chipped in to the quarterly cash influx, too, with almost 5 million Macs of various types sold, representing nearly $6.4 billion in revenue. And iTunes and App Store revenues were up as well: 19
percent year-over-year, representing a fraction under $4.4 billion of Apple’s quarterly revenue haul. 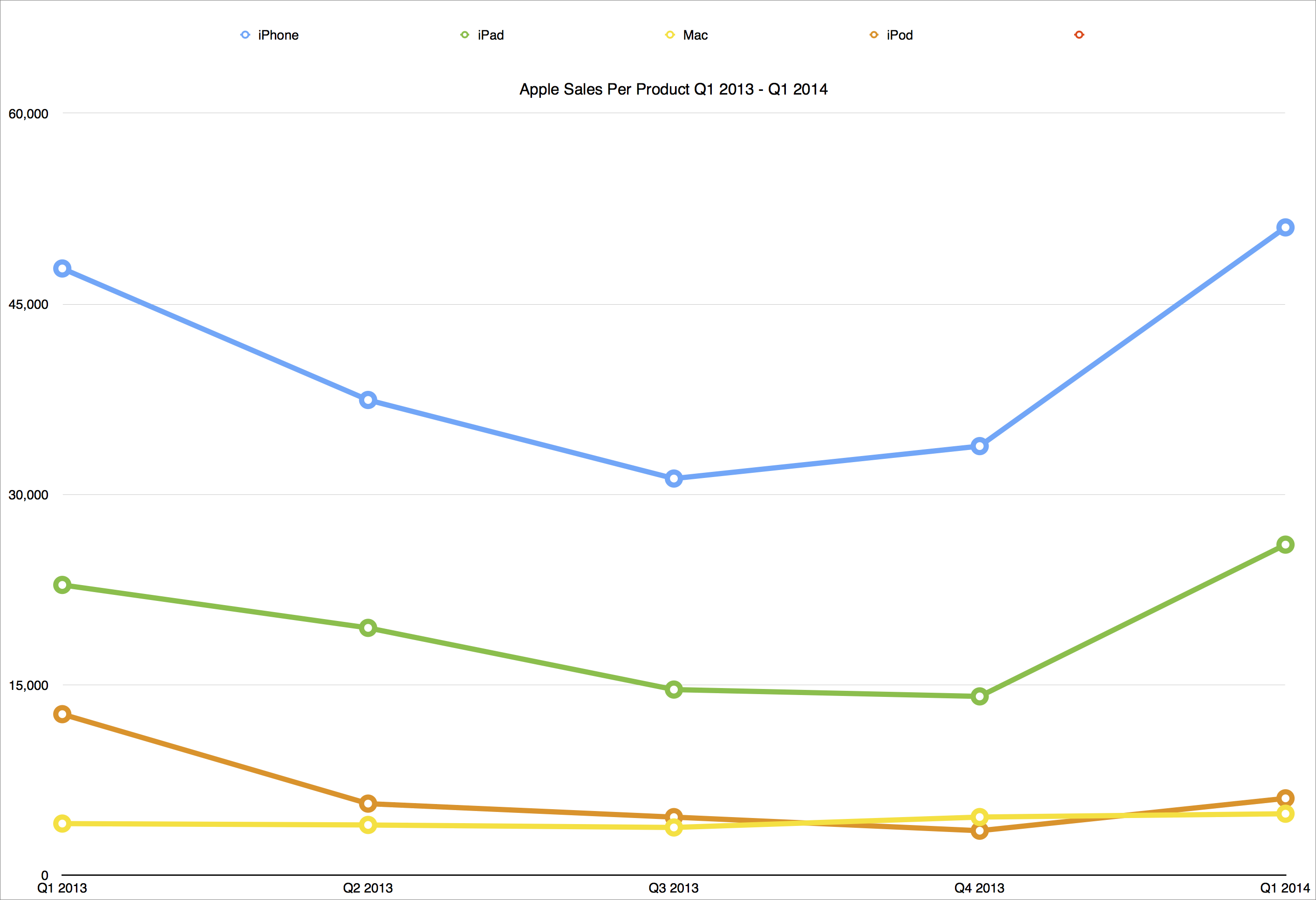 Apple has managed to accumulate a paltry $158.8 billion in cash, despite returning $7.7 billion to shareholders in the quarter via dividends (with over $43 billion paid out over the last six quarters). To put the scale of Apple’s cash on hand in perspective, the State of California expects its budgetary expenditures to reach $106.7 billion in 2014–15. A dividend of $3.03 per share is scheduled to be disbursed to
shareholders in February 2014.

The Mac is slowly but steadily taking over what’s left of PC sales, with CFO Peter Oppenheimer calling it “One of our best Mac quarters ever.” Sales grew by 6 percent from the previous quarter, and 19 percent year-over-year, compared with the overall 10 percent drop in all PC shipments estimated by IDC. In China, Mac sales were particularly good, increasing by 28 percent in what Cook described as a “contracting market” for PCs. For 30 out of the last 31 quarters, in fact, Macs have increased their market share.

It turned out that Tim Cook’s prediction of an “iPad Christmas” in last quarter’s earnings call was right (refer back to “Apple Q4 2013 Results See Lower Profits Again,” 28 October 2013). iPad sales grew by a whopping 85 percent over Q4 2013 and by 14 percent over the year-ago quarter. The iPad saw strong growth overseas, with Chinese sales doubling year-over-year, as well as strong growth in Russia, Latin America, and the Middle East. The iPad maintains a 78 percent share of the U.S. tablet market.

Oppenheimer revealed an interesting tidbit about the iPad: almost every NFL team is using them for playbooks, despite the NFL having a contract with Microsoft to use Surface tablets.

But the iPhone, now Apple’s dominant product, was no slouch either. Sales grew by 7 percent year-over-year, and 51 percent from the previous quarter. CEO Tim Cook said that the iPhone 5s was much more popular than the iPhone 5c in North America. As for why, Cook said, “People are really intrigued with Touch ID.” (Or perhaps they just hate entering passcodes constantly.) However, Cook added that the company saw significant numbers of new iPhone customers purchasing the iPhone 5c, which was Apple’s goal, and that its sales exceeded the iPhone 4S year-over-year.

Despite strong and sometimes stellar iPhone sales worldwide (for example, the iPhone now has a 69 percent market share in Japan), analysts wanted to know why Apple didn’t sell even more. Cook primarily pointed the finger at U.S. carriers, which have restricted early upgrades in recent months. Also, Oppenheimer said that Apple had difficulty keeping up with demand for the iPhone 5s during the quarter.

As for the Apple Store: despite Apple not having a retail chief (the hiring of Burberry CEO Angela Ahrendts was announced during the quarter, but she won’t officially take the position for a few more months), the retail stores managed to bring in nearly $7 billion — a record quarter. There are now 420 Apple Store locations, with an average of 21,000 visitors per week.

The education market subplot also advanced the Apple narrative: textbooks made with iBooks Author are now available in 50 countries instead of 4, and various school districts in the United States are deploying iPads in substantial volumes. Apple has sold more than 750,000 iPads to school districts in Texas alone. They’re welcome to talk to us about bulk discounts on “Take Control of iBooks Author.”

As always, Cook was pressed to reveal upcoming products, and, as always, it was a waste of everyone’s time. But Cook did say, “We have zero issue coming up with things we want to do. The challenge is always to focus on the very few that deserve all our energy.”

Despite Apple having such a strong quarter, Wall Street, as always, was disappointed, driving Apple stock down by more than 8 percent in extended trading. At this point, there’s probably nothing Apple can do to keep Wall Street or its analysts happy. But if Tim Cook can keep Apple’s customers happy and continue to fill the company’s Scrooge McDuck-level money pit, we don’t expect Apple to fade away any time soon.