Apple has reported profits in line with the company’s predictions for nearly all of its products for its fiscal 2014 second quarter. With revenues of $45.6 billion and net profits of $10.2 billion ($11.62 per diluted share), the company’s profits are up 6.9 percent compared to the year-ago quarter (see “Apple Q2 2013 Results Show Higher Revenues, Lower Profits,” 23 April 2013). Despite claims that the company has stopped growing, Tim Cook’s Apple is still going strong.

Apple also announced that it will return over $130 billion to investors by the end of calendar year 2015. Apple’s board has increased its share repurchase authorization to $90 billion from the $60 billion level announced last year. The company is also increasing its quarterly dividend by 8 percent, with additional increases every year.

Additionally, Apple has announced an unusual 7-for-1 stock split, dropping the share price significantly (if it had happened on the day of the earnings report, it would have reduced the price per share from roughly $525 to $75), thus making shares easier to buy for small investors. Each shareholder will receive six additional shares for each current share by the end of 2 June 2014, with split-adjusted trading to begin on 9 June 2014.

While iPad sales fell below analyst expectations, CEO Tim Cook said that it was at the “the high end of our expectations.” Cook said the main reason was that Apple produced fewer iPads than it had in the year-ago quarter. Also, while there was pent-up demand for iPad mini models last year, that didn’t happen this year.

Will Microsoft Office, released last month (see “Microsoft Releases Office for iPad,” 27 March 2014), boost iPad sales? Maybe. “Office I believe does help,” Cook said. “If it had happened earlier, it would have been even better for Microsoft, frankly.” Cook mentioned that Office now had several competitors on the iPad, including Apple’s own iWork suite. “I wholeheartedly welcome Microsoft to the App Store,” Cook said.

Despite worrying iPad and iPod figures, Cook said that Q2 produced “very strong results,” and that Q2 2014 was the “strongest non-holiday quarter ever.” Cook went to great pains to explain that the lower iPad figures, in particular, had more to do with how Apple was handling channel inventory than with demand. He pointed out that iPad had a spectacular 98 percent customer satisfaction rating, noting that no other consumer product gets that. He revealed that iPad was selling strongly in all three market segments: consumer, enterprise, and education; in this last segment, he said that iPad had a 95 percent market share. 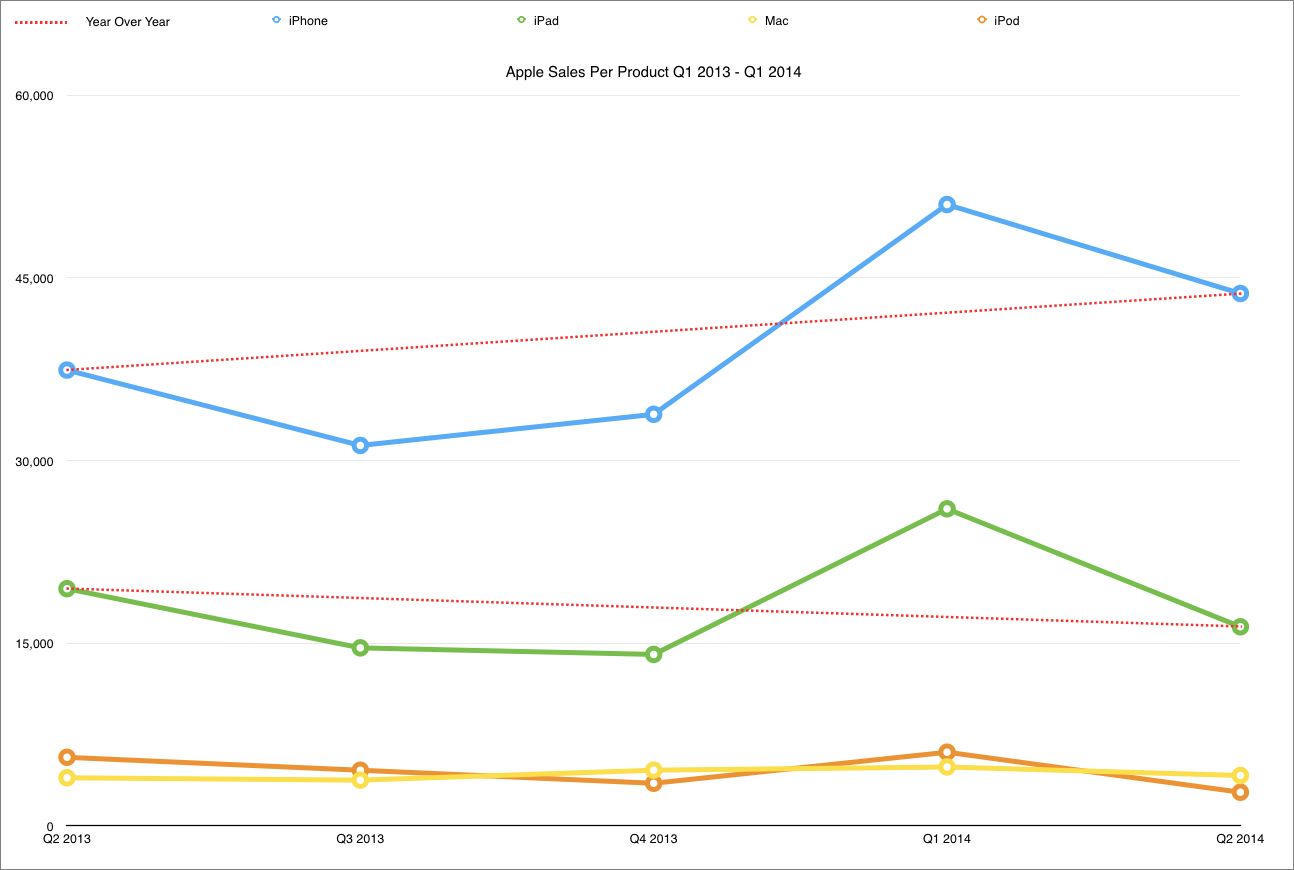 Surprisingly, Apple’s announcements thrilled Wall Street for once, with shares rising more than 7 percent in after-hours trading. But even with the surge, Cook cautioned that, “Stock price does not reflect the full value of the company.”

In other news, Cook announced that Burberry CEO Angela Ahrendts is finally joining Apple next week as its Senior Vice President of Retail and Online Stores, after much speculation in the press that she was dragging her feet. (For the original October announcement, see “Why Angela Ahrendts Is a Perfect Fit for Apple,” 16 October
2013.)

As for Apple’s future, Cook said that the company will expand into new product categories, investing in research and development, the supply chain, and marketing and distribution. But while Cook said that Apple was not going to under-invest in its future, at the same time, it won’t blow its substantial cash reserves of $156 billion. “We need to maintain financial flexibility,” Cook insisted. He pointed out that, nonetheless, Apple had acquired 24 companies in the past 18 months.

Upcoming CFO Luca Maestri, who will be taking over from outgoing CFO Peter Oppenheimer in June, took charge for much of the quarterly investor call. One of the most interesting things Maestri commented on was a push for streamlining the U.S. tax code so that Apple would be incentivized to bring more of its cash back onshore, “which would be a great benefit to the economy.” Apple has been criticized for its use of offshore tax havens; see “Apple Grilled Over Tax Practices,” (24 May 2013).

Cook also gave a warm send-off for Oppenheimer, who Cook said had never once missed guidance in his ten years as CFO. “Apple is more than 20 times the size it was than when Peter took over as CFO,” Cook said, thanking him and wishing him the best.

As for what’s coming, Cook said that Apple was working on new things, but isn’t “ready to pull back the curtain yet.” Cook added, rather philosophically, “It’s better to get it right than get it first… Customers want great. Insanely great.”

As always, analyst Gene Munster asked about the Apple TV, but for once, he didn’t ask about a mythical TV set, but instead posed a thoughtful question about why Cook no longer considers the Apple TV a hobby, and asked for Cook’s reaction to increased competition from Amazon.

“The reason I stripped off the hobby label is when you look at sales of the ATV box itself and you look at content that was bought directly off Apple TV, that number was over a billion dollars,” Cook said, adding that Apple has sold 20 million Apple TVs to date. As for worries about Amazon, Cook coolly said that Apple TV’s content is comparable with its competitors.