Let me cut to the chase. With iOS 8 now out, vast numbers of developers will be releasing updates to their apps. If you have automatic app updates enabled for your iPad, iPhone, or iPod touch, I recommend you turn that feature off until things settle down in a few weeks. To do so, navigate to Settings > iTunes & App Store and make sure the Updates switch is off. To get specific app updates when you’re ready, go to App Store > Updates, and tap the Update button for each app you want to download after checking the release notes. This is more work, but it lets you update your essential apps at a time when potential problems won’t be crippling and when you won’t use up valuable cellular data unnecessarily. 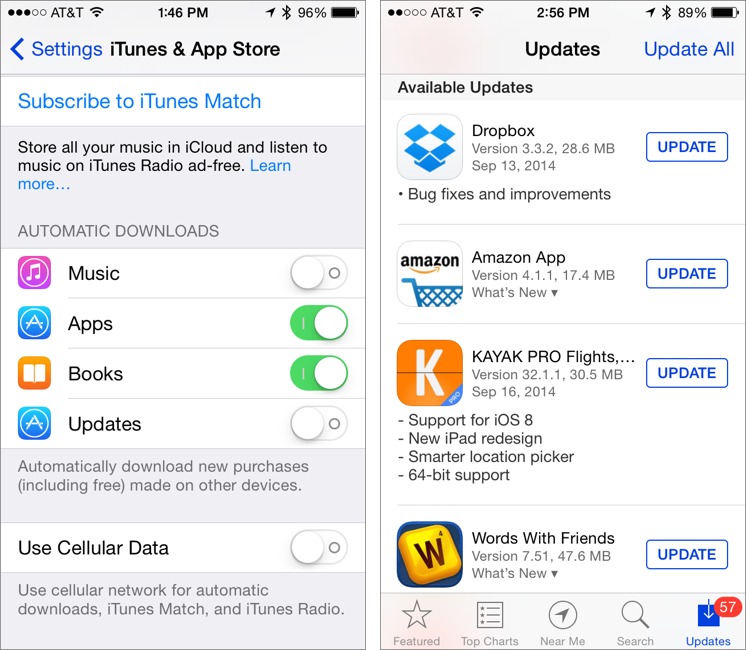 Let me give you a bit of background. Developers have been working madly to update their apps to take advantage of both iOS 8’s new features and the extra attention users will be paying to iOS news. But a rush to a finish dictated more by the long-scheduled iPhone 6 release than anything else isn’t always a good thing, as comments from well-known developers like David Barnard and James Thomson indicate. (And no, I don’t expect any issues with their apps, just that it’s more likely that bugs will sneak in while numerous developers are trying to hit the same arbitrary deadline.) 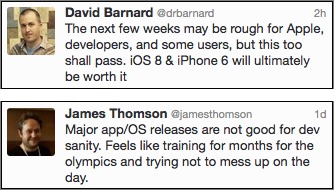 Plus, there will be an awkward time between when iCloud Drive becomes available in iOS 8 (right away) and when OS X 10.10 Yosemite ships. During that time, updated apps that rely on iCloud Drive for syncing may not also be able to sync using the iOS 7 approach that works with 10.9 Mavericks. David Chartier warned about this on Twitter, and although it remains to be seen how many apps are affected, it’s best to play it safe. (For more on this, see “iOS 8 Users: Do Not Upgrade to iCloud Drive,” 16 September 2014.)

The overarching problem here is that a major operating system update is a moving target, with Apple changing how features work while developers attempt to code for them. You can get a sense of how frustrating this can be in Bryan Irace’s blog post outlining all the problems his team had building a share extension for the Tumblr app.

Developer Craig Hockenberry put it best, noting that the only way to guarantee an app works is to put it into a production environment, something that’s not possible until Apple has both released iOS 8.0 and flipped the increasingly large number of switches behind the scenes to ensure that all the iCloud-based services are enabled.

To an extent, Hockenberry’s dictum has always been true, since no amount of testing can anticipate every real world usage scenario. But with iOS, making an app requires a constant dance between developers and Apple, making that production environment increasingly hard to simulate in advance.