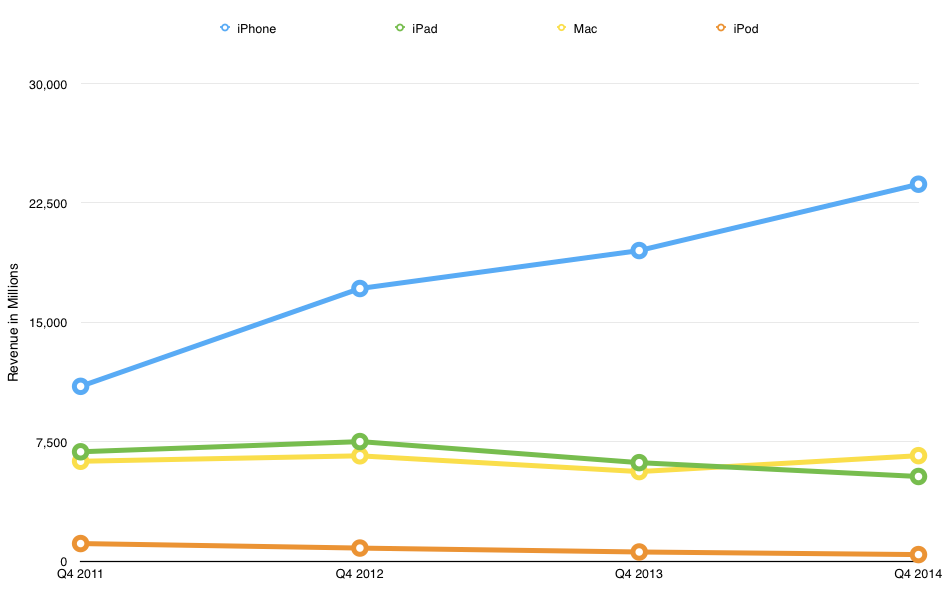 Although iPhone demand is far outstripping supply, Apple managed to sell 39.27 million of them in the quarter, a year-over-year increase of 16 percent. In response to a question, Cook said he couldn’t estimate when iPhone supply and demand would achieve balance, but he was confident that the supply would be “great,” and that this confidence underlies the strong guidance (revenue between $63.5 billion and $66.5 billion) the company has given for next quarter.

Even as the iPhone continues its stratospheric rise, the iPad remains in a bit of a slump, with revenue falling 14 percent year-over-year. Cook implored investors to look at the big picture. “Instead of looking at each 90 days, we’ve sold 237 million [iPads] in just four years; that’s about twice the number of iPhones sold during first four years of iPhone,” Cook said. He added that people hold onto their iPads longer than their iPhones, which accounts for the perceived slump. “We don’t really know what the upgrade cycle will be for people,” he said. Two pieces of news brightened the iPad story: according to Cook, the device scored an “unheard of” 100 percent customer satisfaction rating (says who?), and its
educational market share in the United States is at 90 percent.

In contrast to the contracting iPad market, the Mac is doing better than ever, generating an 18 percent year-over-year increase in revenue. The Mac’s growth is all the more impressive considering that IDC declared a 1.7 percent drop in PC shipments in Q3 2014 (and that was actually taken to be an encouraging sign). Apple reported that the Mac had its highest quarterly market share since 1995. “It was an absolutely blow-away quarter,” Cook said of the Mac’s newfound success. Cook also indicated that back-to-school sales drove the Mac’s growth.

Perhaps most shocking, though inevitable in hindsight, was the announcement that the iPod will no longer be reported as its own product category next quarter, but instead will be thrown in the figurative junk drawer of “Other Products,” along with accessories, the Apple TV, Beats products, and the Apple Watch. Sales of the once-groundbreaking iPod dropped a staggering 62.8 percent from Q4 2011 to Q4 2014.

Apple’s stores are both doing well and spreading out: Cook noted that 41 percent of Apple stores are outside of the United States. The retail stores brought in $5.1 billion in revenue last quarter, with each store, on average, hosting 18,000 visitors per week.

Despite the record earnings, the company actually has less cash on hand, with a mere $155.2 billion in cash and securities in the company’s money pile, reducing the height of the pile by $9.3 billion from the previous quarter. This decline is because Apple is giving money away: nearly $20 billion was returned to shareholders in the quarter and $9 billion went toward stock repurchases. Market transactions accounted for another $8 billion. Overall, $94 billion of the company’s $135 billion capital return program has been spent, with five quarters left to go.

Although investors and analysts posed a number of questions, one question was left surprisingly unasked: what happened between Apple and sapphire producer GT Advanced Technologies (GTAT)? Late last year, Apple signed a $578 million deal with the company to build a state-of-the-art production plant in Arizona, making GTAT one of 2014’s hottest stocks, making rumors fly that the iPhone 6 and Apple Watch would be encased in GTAT sapphire.

However, Apple’s iPhone 6 and Apple Watch announcements came and went, with no sapphire used, except in Touch ID sensors and the screen of the Apple Watch Edition. Shortly thereafter, GTAT filed for Chapter 11 bankruptcy, leading to questions about where Apple’s infusion of cash went. Then things took a nasty turn. The once-high-flying GTAT was delisted by NASDAQ, and the company had some harsh things to say about its deal
with Apple, calling the deal “oppressive” and “burdensome” in court.

Apple remains mum about the failed deal and continues its legal fight to keep its contracts with GTAT a secret. Years may pass before we know the truth about what went wrong, which makes it all the more curious why none of those participating in Apple’s conference call brought the matter up. (Was it declared a verboten topic before the call?)

Even with the repercussions from GTAT’s failure lurking as the proverbial elephant in the room, Apple is still doing remarkably well over three years after the passing of Steve Jobs. Tim Cook has made his share of mistakes, but it would be hard to say that he hasn’t filled some impressively large shoes and kept Apple accelerating. “I’m incredibly optimistic about the future,” Cook said.