Apple, it seems, is unstoppable. The company recorded net profits of $18 billion on revenues of $74.6 billion in its first fiscal quarter of 2015, making it the most profitable single quarter for any corporation, ever. Although a consensus of analysts had predicted revenues of $67.69 billion and earnings of $2.60 per share, the actual earnings per share figure turned out to be $3.06. By comparison, for this quarter last year, Apple took in $57.6 billion, with profits of $13.1 billion ($2.07 per
share).

Apple sold a breathtaking 74.5 million iPhones in the first quarter, a year-over-year unit sales increase of 45.9 percent. For those who like to play with their numbers, this averages out to more than 34,000 iPhones sold during every hour of every day in the quarter, a volume CEO Tim Cook called “hard to comprehend.” About two-thirds of Apple’s revenue was from iPhone sales. “[iPhone] demand has been staggering,” Cook said in the quarterly financial call. And that even takes into account the fact that it took Apple until January to bring iPhone 6 supply in line with demand.

The Mac continues to increase in popularity, with Apple selling 5.5 million units, a year-over-year increase of 14 percent. This sales growth affected both laptops and desktops, and runs counter to the industry trend: IDC had reported a 2.4 percent decline in computer sales generally in the previous quarter and, during analyst questions, Cook noted that the general PC market decline for the first fiscal quarter of 2015 was about 3 percent.

The iPad continues to be something of a weak spot in Apple’s lineup, which continued its sales slump with only 21.4 million units, a year-over-year decrease of 21.6 percent. The entire tablet market, according to IDC, moved only 54 million units. 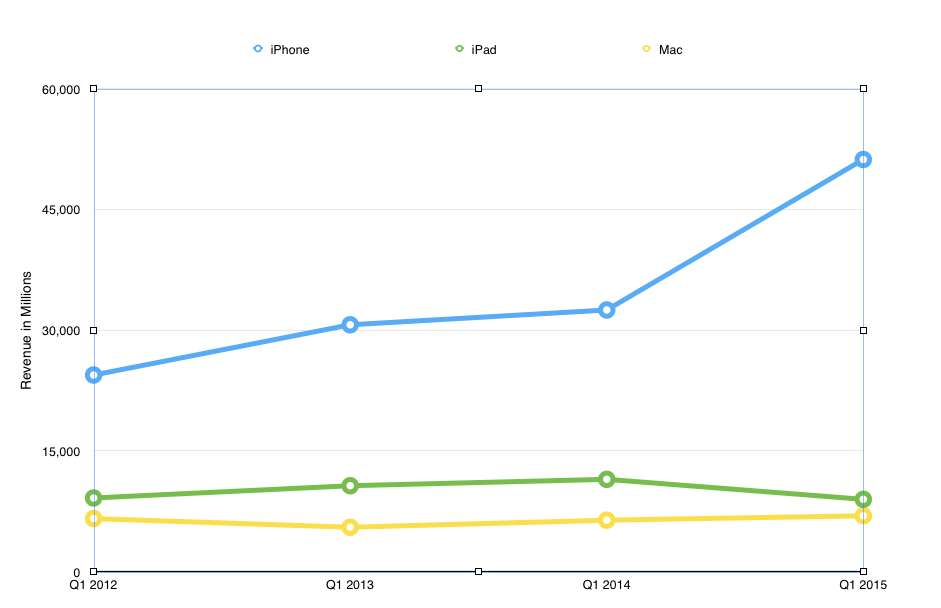 Cook said that he’s still bullish on the iPad, and that measuring its growth by quarter doesn’t give the full picture. Cook said the first-time buyer rate is 50 percent in developing markets and 70 percent elsewhere. Cook said that usage and commerce adoption are high, with the iPad accounting for 82 percent of U.S. ecommerce transactions from tablets. Cook is also optimistic about the IBM partnership to help bring iPads into enterprises (see “ITbits: Putting IBM
MobileFirst in (Apple’s Enterprise) Context,” 22 July 2014). While noting that iPads are in all of the Fortune 500 companies, he said that currently “enterprises are only deploying them to small percentages of their workforce.” And that’s where IBM comes in, with enterprise-specific mobile apps, which Cook said are being released at a rapid clip.

Once the brightest light in Apple’s lineup, the iPod has officially dimmed to a mere ember. Its waning revenues — which include those from both the iOS-based iPod touch and the dedicated iPod nano and iPod shuffle — have been rolled into the catch-all Other Products category, which now includes iPod, Apple TV, Beats Electronics, and accessories. Apple made a mere $2.7 billion from this category, a year-over-year decrease of 5.2 percent.

Despite the iPad and iPod declines, the popularity of iOS devices remains unprecedented: Apple sold its one billionth iOS device late last year — the specific device that attained that milestone was a space gray 64 GB iPhone 6 Plus, which Apple has obtained from the purchaser and saved, possibly in a secret trophy case buried somewhere deep in the catacombs under Cupertino.

Speaking of iOS devices, we don’t have much longer to wait for the iPod’s heir apparent, the Apple Watch. During the call’s question/answer session, Cook said that it will launch in April 2015, and that he already can’t live without his, which he wears every day. (No one had the temerity to ask him how often he has to recharge it.)

Sales and services also contributed to the blowout quarter, including App Store revenues, which were up 41 percent. Services accounted for $4.8 billion in revenue — nearly double what iPod and other accessory sales brought in, underscoring just how far the iPod has fallen.

Apple remains excited about Apple Pay. Cook went so far as to say that this year is the “Year of Apple Pay.” He noted that there are “tons of things on the roadmap” in terms of adding services and capabilities to the financial service. Cook also remarked that he was “positively shocked at how many merchants were able to implement Apple Pay in the heart of the holiday season.” Retailer Whole Foods reported that it saw a 400 percent increase in contactless payments after the launch of Apple Pay.

Of course, you can’t have an Apple earnings call without analyst Gene Munster asking about the Apple TV. Cook, as always, remained mum on its future, responding with his traditional “We’re still looking at it,” and revealed that Apple has sold 25 million of the set-top boxes.

Financial analysts asking Tim Cook asinine questions about Apple’s secrets has become an irritating earnings call tradition. May we suggest that Cook invite Seattle Seahawks running back Marshawn Lynch to take questions? It would add a bit of levity to the call, and no one is better at ignoring questions than Lynch. Someone could ask, “What is the next big product from Apple,” and Lynch would step in to say, “Thank you, I’m grateful. I’m just here so I won’t get fined.”