At Apple’s “Spring Forward” event, the company revealed more details about the pricing and availability of the Apple Watch, as well as a few more examples of Apple Watch apps and capabilities.

Trail of Tiers — As was well known before the event, the Apple Watch will be available in three basic tiers: the Apple Watch Sport, featuring anodized aluminum bodies in two colors, each with a pair of fluoroelastomer bands; the standard Apple Watch, with a stainless steel body and a wider range of included bands; and the Apple Watch Edition, featuring an 18-karat gold body and a more expensive range of bands. Now we know what the starting prices are for each tier:

You will be able to acquire additional bands for your Apple Watch, but they won’t come cheap either: the least expensive, a Sport Band, will siphon $49 from your Apple Pay account, and the Link Bracelet, the most expensive, will set you back $449.

Apps and Battery Life — A fair portion of the event was taken up with a look at the apps and functionality available. Independent apps such as MLB At Bat, Uber, and Instagram were shown, along with apps designed for travelers, including flight tracking and hotel door-key apps, and, of course, health apps that track your activity and remind you to stand up if you’ve been sitting too long.

The built-in apps include such long-time favorites as Phone, Mail, Messages, Calendar, Maps, and Weather, along with useful newcomers like Camera Remote, which acts as a viewfinder and shutter release for your iPhone camera. The Remote app will help you control your Apple TV — no more searching under the sofa cushions for that elusive remote! In case you forget that your Apple Watch is a timepiece, the built-in apps include World Clock and Stopwatch.

Third-party apps include obvious ones like Twitter, entertainment apps like Shazam and Fandango, commerce apps like Citi Mobile and eBay, and even such special purpose apps as AMPLIFi Remote for tuning your electric guitar.

As we’ve known all along, though, nearly all these apps are really iPhone apps that communicate with the Apple Watch: for example, your MLB app may show you up-to-the-minute game results on your watch, but the app itself is running on the iPhone and sending those results to the watch for display. 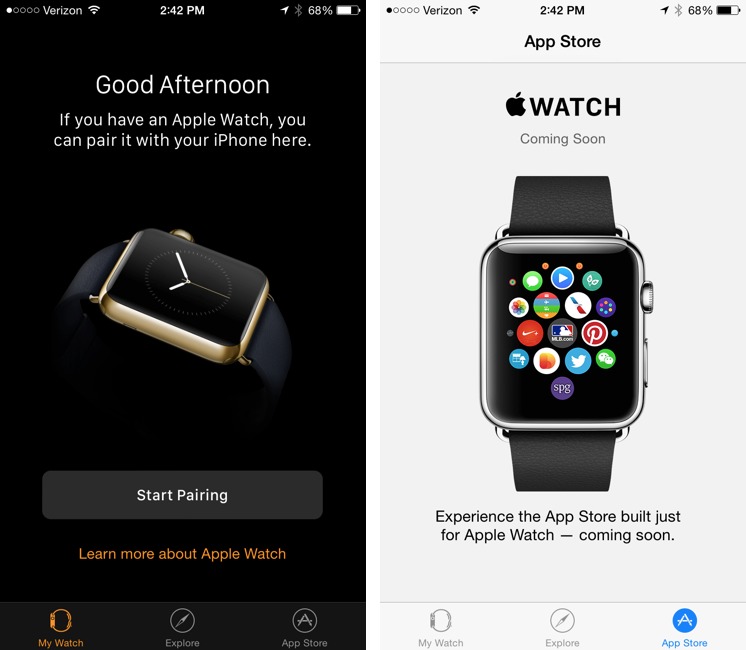 Siri provides much of the interactive capability of the Apple Watch: you speak to your watch (raise your wrist and say “Hey, Siri”) to invoke many of the device’s features. However, you must have an iPhone paired with the watch and within range for this to work. Luckily, “in range” does not mean “in your pocket or within Bluetooth range”: the Apple Watch can also communicate with your iPhone if it is on the same Wi-Fi network. Those who are old enough to remember Dick
Tracy (who?) and his wrist radio will be pleased to know that the watch can function as a wrist-worn speakerphone — again, in collaboration with your iPhone. 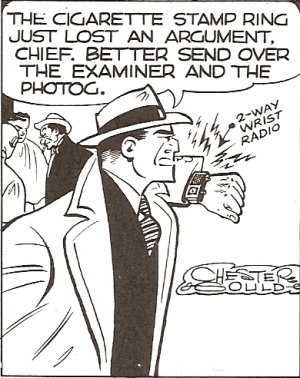 All of these apps and capabilities, of course, consume power. Tim Cook said that the Apple Watch was designed with an “all day battery” which provides enough power for 18 hours of “typical” use. This means, of course, that the more attractive that Apple Watch apps become to use, the more likely it is that such “typical” usage patterns may change, driving the hours between required recharges down.

Availability — Apple has finally announced when the watches will be available: pre-ordering starts on 10 April 2015, and the devices ship on 24 April 2015. Purchasers can preview and configure their purchases both in the online Apple Store and in physical Apple Stores; the latter will have special tables set up to display and demonstrate the devices. Initially, the Apple Watch will be available in ten countries with more to follow shortly.

Given the steep prices, not everyone who has an iPhone will want an Apple Watch, but if you do, start saving now and get ready to enjoy the sound of money whooshing from your pocket toward the money pits beneath Cupertino. It will be a mighty wind.

Apple Watch Crash Course — If you want to learn more about the Apple Watch right away, allow us to recommend our latest ebook, Jeff Carlson’s “Apple Watch: A Take Control Crash Course.” It has only 23 tightly written pages now, but is carefully designed to help you choose an Apple Watch, understand what it can (and cannot) do, learn how it stacks up against the smartwatch competition, and explain how you’ll interact with it. Because the 1.0 version is so short, we’re selling it for only $5, half what it will cost once Jeff gets his own Apple Watch and can document it fully. Everyone who buys now
will get a free update to the more comprehensive 1.1 version, which we plan to publish in May. Of course, like all our Crash Course titles, you’ll be able to ask Jeff questions that can help guide the next version.