Surprising only those who have been hiding under a rock since the turn of the century, Apple continues to avoid doom, reporting record profits for the second fiscal quarter of 2015. With revenues of $58 billion and net profits of $13.6 billion ($2.33 per diluted share), the company’s profits are up $3.4 billion over those recorded in the year-ago quarter (see “Apple Posts Record Q2 2014 Revenues Despite Slipping iPad Sales,” 23 April 2014). Gross margin was 40.8 percent for the quarter, compared to a 39.3 percent margin for the same quarter last year. International sales dominated the revenue stream, providing 69 percent of the quarter’s revenue.

With the exception of Japan (which saw a 15 percent decline from a year ago), all of Apple’s operating segments showed an increase in revenue over the year-ago quarter, with the Greater China segment racking up a remarkable 71 percent increase. Right behind was the rest of the Asia-Pacific segment, with a 48 percent increase.

The iPhone business continues to boom: Apple sold about 61.2 million units for a total of $40.3 billion in revenue. The iPhone once again set a second-quarter record for sales, with year-over-year growth of 39.9 percent. The big phones are here to stay: about 20 percent of iPhone sales are upgrades to the iPhone 6 and 6 Plus. CEO Tim Cook credits the iPhone’s growth to a greater percentage of people switching from other platforms, as well as the App Store’s best quarter ever, with 29 percent year-over-year growth.

In a time of slowing PC sales, with the entire market contracting by over 7 percent, Mac sales displayed impressive year-over-year growth at 10.3 percent, for a total of over 4.5 million units sold. Cook didn’t specify sales for the new MacBook, but he mentioned that Apple has been “very happy” with the response.

Harshing Apple’s buzz, albeit only slightly, is the iPad, which saw a year-over-year sales drop of 22.8 percent, although that still amounts to 12.62 million iPads sold during the quarter. Also helping dispel the gloom is the fact that Apple sold more iPads in Japan and China than ever before. Still, it’s notable that Apple saw more revenue from the Mac than the iPad. “We’re seeing [iPad sales] cannibalization from the iPhone and from the Mac, but we’re not worried about that,” Cook said. Cook believes that iPad sales will increase over the long term. 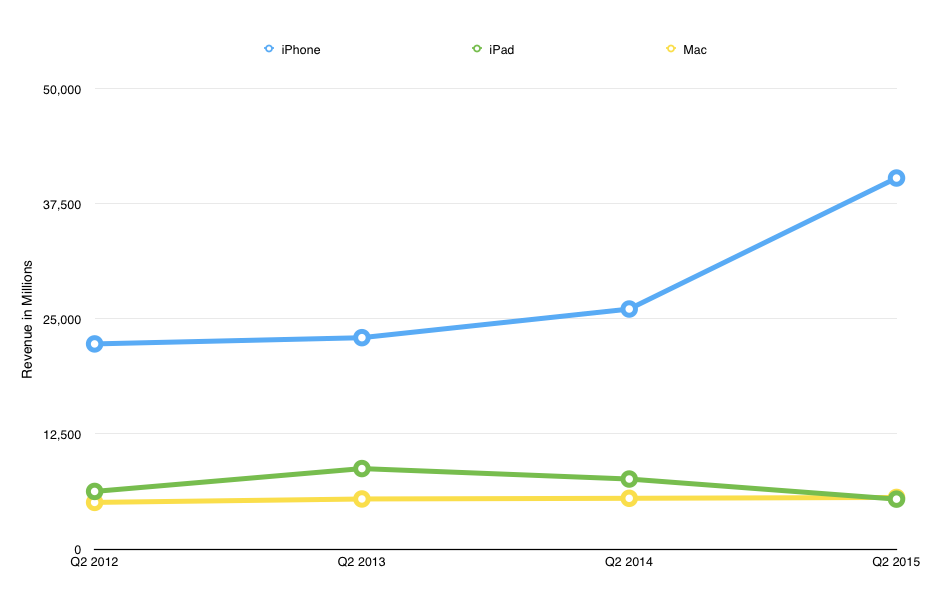 Apple also did well with services this quarter, with revenue of about $5 billion, representing a year-over-year increase of 9 percent. Apple boasted that the App Store had 77 percent more revenue than Google Play in the quarter. While specific numbers about the new HBO NOW service were not offered, Cook indicated that he was pleased with the response, and called it one of Apple’s most-downloaded apps.

Cook reported businesses and banks continue to adopt Apple Pay, with Discover scheduled to adopt the system in the latter part of this year, and with Best Buy already accepting it for in-app purchases — all Best Buy retail outlets are expected to accept Apple Pay purchases within the next few months. The Best Buy addition is huge news for Apple Pay, since Best Buy is a member of the Walmart-led MCX Consortium that banned Apple Pay, preferring its own system (see “The Real Reason Some Merchants Are Blocking Apple Pay… for Now,” 26 October 2014).

Curiously, Apple did not offer any first-weekend sales numbers for the Apple Watch, although it should be noted that all sales took place after the end of the second fiscal quarter. When asked, Cook declined to offer specific sales numbers, but CFO Luca Maestri said that they expect Apple Watch margins to be below the company average. Cook did say that demand is outstripping supply, but Apple still hopes to offer the Apple Watch outside of the United States by late June 2015. Apple’s Other Products category, which includes iPods, Apple TVs, Beats Electronics, and accessories, brought in about $1.7 billion in revenue.

Apple ended the quarter with over $193 billion in cash on hand, and it expects to see revenues of between $46 and $48 billion next quarter, with margins falling into the 38.5 to 39.5 percent range, likely due to the Apple Watch.

The company is using part of its Smaug-sized cash hoard to build data centers in Ireland and Denmark (at a cost of about $2 billion, or roughly 1 percent of the corporate cash pile); to build a solar farm in China’s Szechuan province that is expected to generate more electrical power than Apple uses in its activities there; and to support its conservation efforts (see “Apple Buying 36,000 Acres of Forest,” 18 April 2015).

Investors will also be thrilled to note that Apple is expanding its capital return program more than 50 percent, to $200 billion for buybacks and increased dividends. Investors can expect a new dividend of $0.52 per share, payable on 14 May 2015 for investors of record at the close of business on 11 May 2015. Since the inception of the program in August 2012, Apple has returned over $112 billion to shareholders, including $80 billion in repurchases.

With yet another massive quarter, Tim Cook has assuaged even the harshest of Apple’s critics. Even if the Apple Watch were to be a flop, Apple would be far from doomed. Most companies would kill to have even Apple’s shrinking iPad business, not to mention its titanic iPhone segment. And with its ever-growing pile of cash, Apple has proven that it can’t even give money away to shareholders fast enough. Hopefully we’ll know by next quarter how the Apple Watch is doing, but we won’t be surprised if Apple posts record numbers again, regardless.

Comments About Apple Makes Even More Money in Q2 2015