Reporting on its fiscal 2015 third quarter financial results, Apple has announced net profits of $10.7 billion ($1.85 per diluted share) on revenues of $49.6 billion, exceeding the analyst consensus estimate of $1.81 per share in earnings. The company’s revenues are up 33 percent (an increase of $12.3 billion) compared to the year-ago quarter, the fastest growth rate in three years (see “Apple Q3 2014 Results Show Highest EPS in Seven Quarters,” 22 July 2014). Apple realized 64 percent of its revenues from international sales.

Despite these impressive financial results, Apple’s stock price fell over 8 percent in after-hours trading (but is still near its all-time high). Apple certainly shouldn’t be worried about what the market thinks in the short-term — the company now boasts over $202 billion in its money pit. Apple’s stack of cash is almost equal to Greece’s GDP. 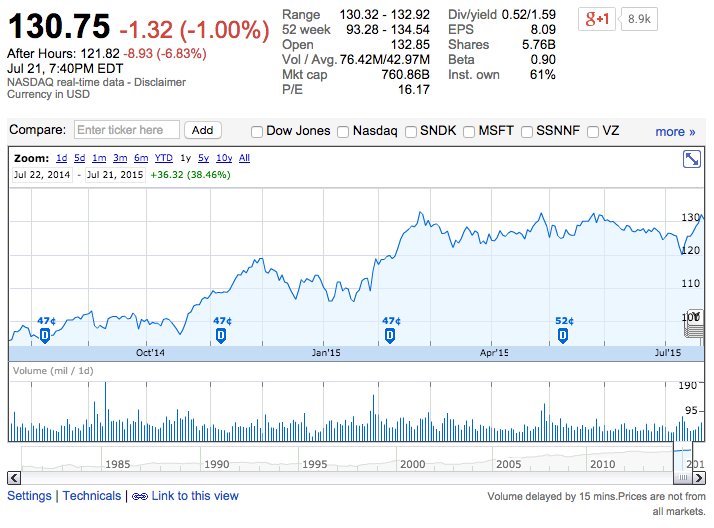 Apple continues to be cagey about Apple Watch sales figures, burying them in the miscellaneous Other Products category, which had total revenues of $2.6 billion, but CEO Tim Cook maintains that the Apple Watch is off to “a great start.” Revenue in Other Products was up by 49.5 percent year-over-year, and CFO Luca Maestri said that Apple Watch was responsible for over 100 percent of the category’s growth, but that’s comparing apples and oranges, since the Other Products category didn’t include iPod sales
until Q1 2015 (see “Big iPhones Mean a Big Q1 2015 for Apple; Apple Watch Date Revealed,” 27 January 2015). Maestri said that Apple is choosing not to share specific Apple Watch numbers so as to not help competitors, though it’s unclear why that would be important for the Apple Watch but not, say, the iPhone or iPad.

Nonetheless, Cook gently contradicted reports that Apple Watch demand is declining, stating that June sales of the watch were higher than those in April and May. In fact, Cook said that so far, the Apple Watch is outselling both the original iPhone and the original iPad at the same point in their lifetimes. He did, however, emphasize that Apple is less focused on initial sales, and is choosing instead to focus on a great customer experience. “It’s such a rare privilege to launch a new platform with such potential,” Cook said.

As has become commonplace, iPhone sales continue to skyrocket, with a year-over-year revenue increase of 58.8 percent. Cook bragged that the iPhone is seeing the “highest switcher rate from Android ever measured.” He said that 86 percent of customers planned to buy another iPhone, compared with 50 percent for the next highest brand measured. The iPhone saw an 87 percent unit growth in China, compared to IDC estimates of a 5 percent unit growth for the entire Chinese smartphone market.

The Mac continues to climb the charts, with year-over-year revenues increasing by 9 percent — this in the face of IDC estimates that the overall PC market had contracted by 12 percent in the third quarter. Mac sales grew by a whopping 33 percent in China.

However, the iPad sales volume continues to decline, with a year-over-year revenue decrease of 22.9 percent. Cook said that he’s still bullish on the iPad, citing both the new iOS 9 feature enhancements and increasing enterprise adoption. Helping spur that adoption, Maestri said, was the success of the IBM partnership, with some 35 enterprise apps already released, and with 100 scheduled to be available by year’s end. Cook also noted that iPad usage is more than six times that of competing products, which bodes well for eventual upgrade sales. Maestri remarked that, of those surveyed, over half who intend to purchase a tablet in the next 90 days are choosing the iPad, and over 70 percent of enterprise purchasers are also going with
the iPad. He added that Apple doesn’t compete in the sub-$200 end of the tablet market, but has a 96 percent share of tablets outside that price range. 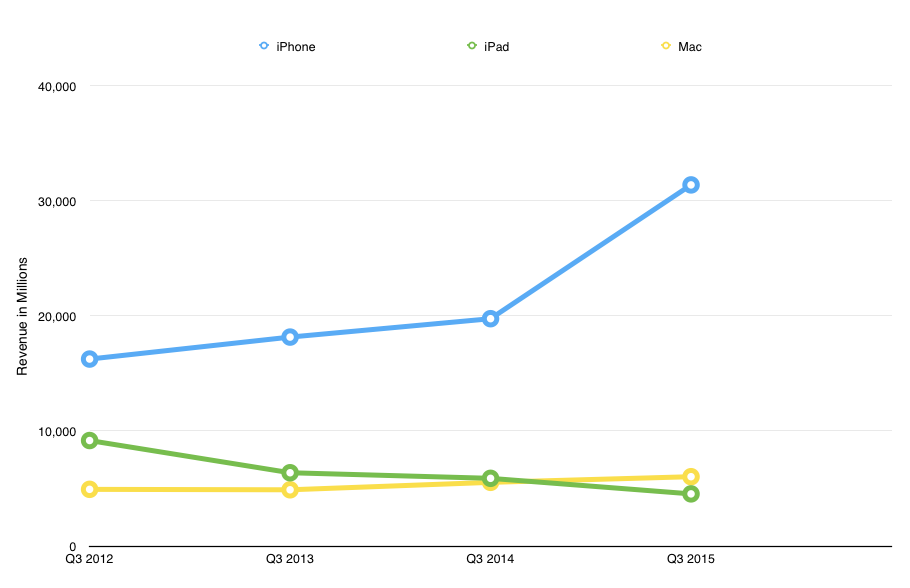 Apple raked in over $5 billion in services, a new all-time high, up 12 percent year-over-year. App Store revenue grew by 24 percent in the quarter. Apple Pay seems to be doing well, with a quarter-million locations for last week’s UK launch, Square Reader support in the fall, and upcoming Apple Pay support at over 700 colleges and universities, including Auburn, Colorado State, the University of Kentucky, the University of Oklahoma, and UC Irvine. American Express will also be adding Apple Pay support for corporate
cards next month.