It now seems clear that the end of mobile phone subsidies hasn’t hurt iPhone sales at all (see “Comparing U.S. iPhone Plan Costs in a Contract-Free World,” 11 September 2015). Apple sold 48 million iPhones in Q4, with a year-over-year revenue increase of 36 percent. The newly instituted Apple iPhone Upgrade program has so far had “negligible impact” on revenues, according to Apple CFO Luca Maestri, but Tim Cook said that both Apple’s program and those offered by carriers do have a positive effect in the market because such programs effectively create more price points for the iPhone product line, which in turn helps boost sales.

Apparently, the iPhone 6s is doing some damage to Samsung, Google, and other Android smartphone makers, as Cook reported that 30 percent of iPhone buyers in Q4 were converts from Android, a new record.

On the other hand, and surprising no one, the iPad continued its slow decline, with a year-over-year drop of 20 percent in both units sold and revenue. We’ll have to wait until next quarter to see if the upcoming iPad Pro will turn the tide (see “iPad Pro with Smart Keyboard and Apple Pencil Announced,” 9 September 2015). iPad sales could also be boosted by enterprise sales: Apple cited its ongoing partnership with IBM and its new partnership with Cisco as possible drivers for future iPad sales growth. Despite the decline in sales, the iPad product line still commands 73 percent of the market for tablets costing more than $200.

Apple’s revenue across all world segments was up, with a breathtaking rise in Greater China from $6.29 billion to $12.51 billion year over year. iPhones, in particular, are popular in that region, with sales increasing by 120 percent.

The Mac is hanging in there, chalking up a modest 3 percent increase in revenue year-over-year. On the other hand, in light of the 11 percent overall contraction in the PC market, the Mac is doing great, and it brought in more revenue than the iPad once again. 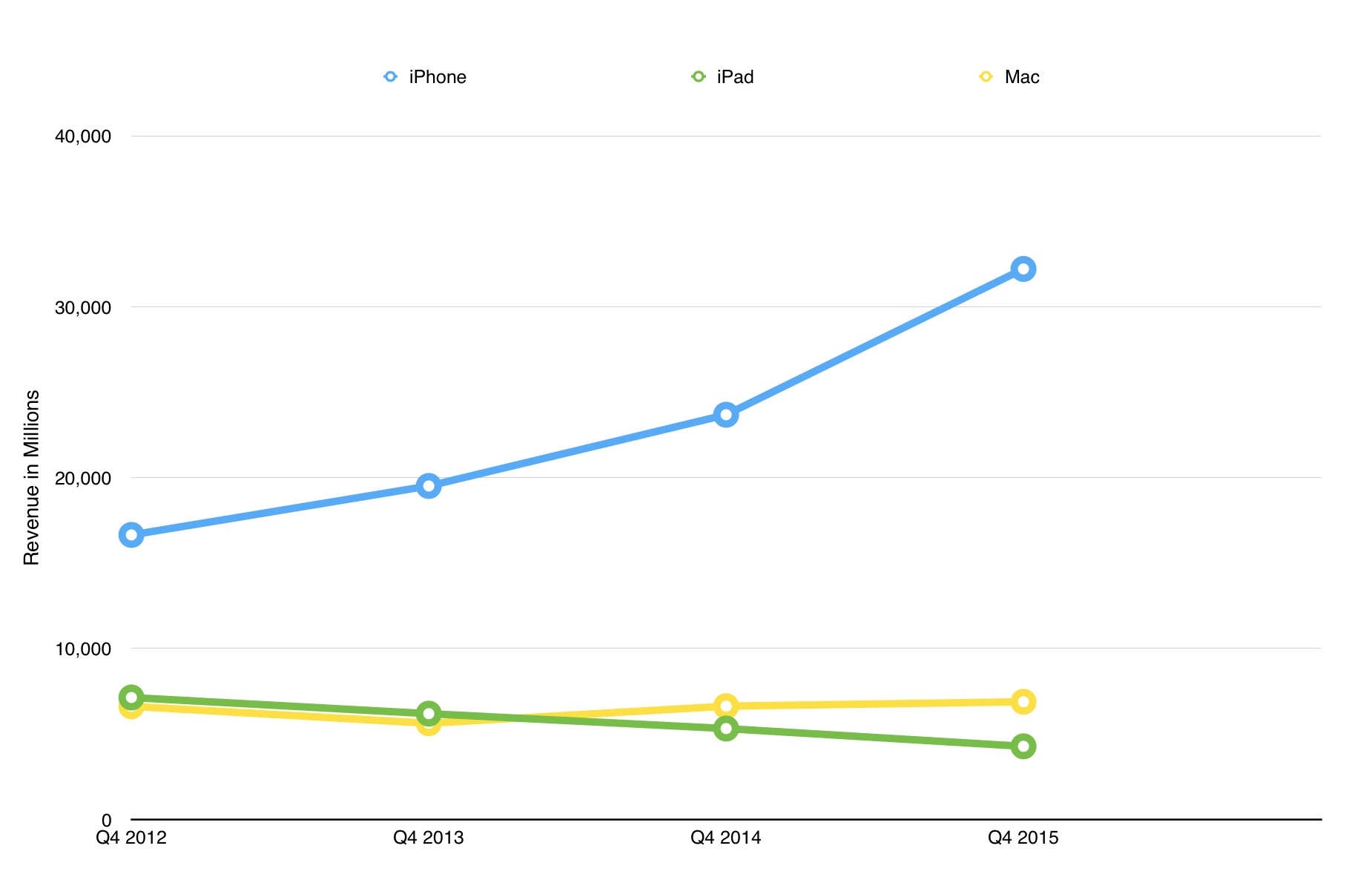 The Services category is seeing the benefits from Apple Pay, growing 10 percent over the past year and bringing in over $5 billion for the quarter. Apple Music likely wasn’t a factor here, since the first wave of three-month Apple Music trials didn’t end until 30 September 2015, 4 days after the end of Q4. However, Apple claims that the service has 6.5 million paying subscribers, which isn’t bad given its many problems (Apple Music competitor Spotify boasts
over 20 million subscribers). Subscribers are certain to increase shortly, as Apple Music, along with iBooks and iTunes Movies, is being rolled out in China this quarter and is coming to the new Apple TV 4 this week.

Apple announced during the call that American Express users around the world will soon get access to Apple Pay, first in Australia and Canada, and followed by Hong Kong, Singapore, and Spain in 2016. Cook also said that Starbucks will soon support Apple Pay.

Apple continues to be cagey about Apple Watch sales, though year-over-year revenues in the Other Products category, which includes Apple TV, Apple Watch, Beats, iPod, and accessories, were up a whopping 61 percent. This figure does not include sales of the fourth-generation Apple TV model, as Q4 ended a month before pre-orders for the new set-top box began. However, Cook said that the new Apple TV had a “huge first day” of preorders. Even though no numbers were given regarding the Apple Watch, Cook did say that sales of the device were up and had exceeded expectations. While Other Products remains Apple’s smallest revenue category, it still brought in $3 billion in Q4, which would be a pretty good business on its own.

For anyone worried that Apple is doomed and will keel over at any moment now, fear not. Apple has added an additional $3.5 billion to its Smaug-sized cash hoard since Q3 2015, bringing its total stockpile to $206.4 billion. At this point, Cook couldn’t run Apple into the ground if he tried — though in fact, he’s doing quite the opposite.