Those quarterly numbers were records, if just barely, but year-over-year revenues were actually down in the Americas by 4.1 percent and by 12.0 percent in Japan, although that was offset by a 13.8 percent year-over-year increase in Greater China, a market that has become increasingly important to Apple’s fortunes. In all, sales outside of the United States accounted for nearly two-thirds of the company’s revenues in the quarter. (Click the charts to enlarge them.) 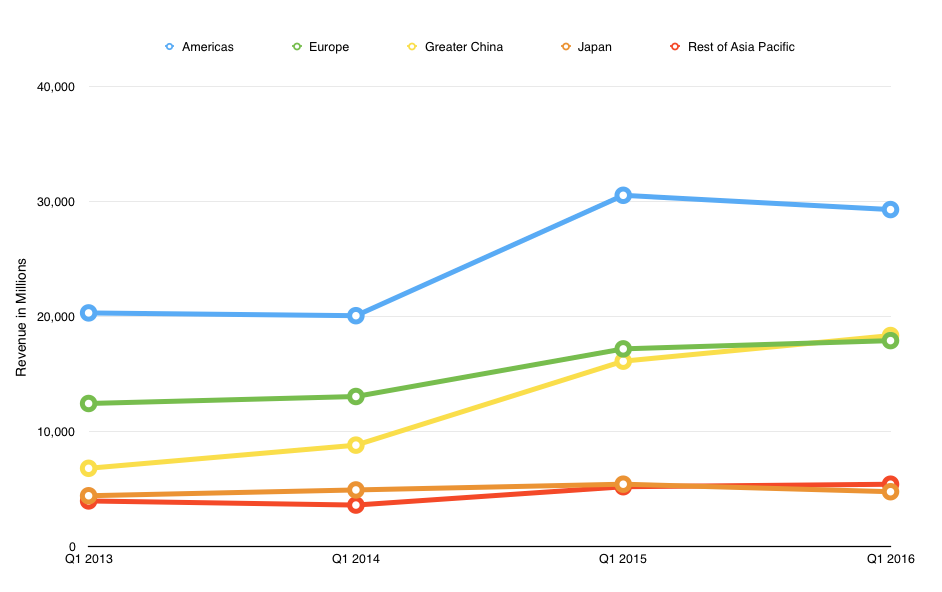 Despite the growth in China, CEO Tim Cook pinned Apple’s relative woes on the international market. Along with the usual end-quarter summary, Apple also released a supplemental data PDF, an unusual move for the company. These supplemental data explain the currency situation, showing that $100 of Apple’s revenue outside of the United States in Q4 2014 translates to only $85 U.S. dollars today.

However, currency fluctuations don’t explain the dips in revenue entirely, as overall unit sales were flat or down, as this chart illustrates: 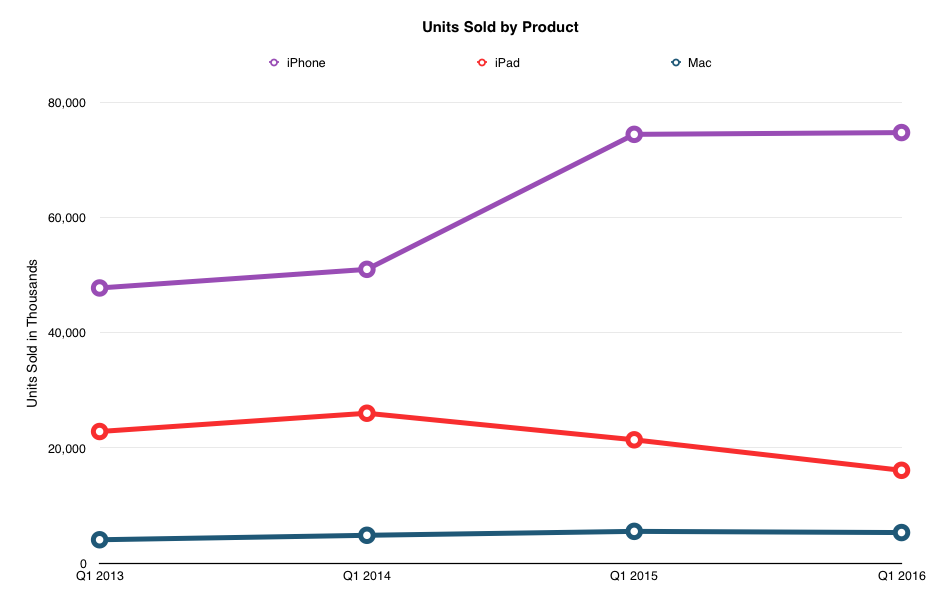 The iPhone juggernaut has finally slowed, with a year-over-year revenue increase of just 0.9 percent, compared to the whopping 36 percent year-over-year revenue surge seen in Q4 2015 (see “Apple Wraps up a Record-Breaking Year in Q4 2015,” 27 October 2015). Given that Q1 encompasses the Christmas season, that number is troubling, but don’t panic yet: Apple still managed to sell 74.8 million iPhones in the quarter. Cook noted that over half the iPhones sold
in China were to first-time purchasers.

Why has the iPhone machine seemingly ground to a halt, especially with Cook bragging about the highest number of Android converts ever (analyst Ben Bajarin estimates a figure of at least 30 percent)? The most obvious answer would seem to be the new pricing model for the iPhone in the United States, as explained in “Comparing U.S. iPhone Plan Costs in a Contract-Free World” (11 September 2015). The former $199 starting price for the iPhone has been replaced by its true starting price of $649. Although this is offset by the elimination of two-year contracts, lower monthly service fees, and iPhone leasing programs (such
as Apple’s iPhone Upgrade Program), sticker shock could have been a turnoff for buyers, especially during the holiday gift giving season.

iPad sales declines continue to trouble Apple. Even the shiny new iPad Pro and new iPad-specific features of iOS 9, such as Split Screen and Picture in Picture, haven’t been able to rekindle sales growth. Year-over-year iPad revenues fell to $7.1 billion, a painful 21.2 percent drop from the year-ago quarter, on 16.1 million units sold, itself a 24.8 percent drop. That means that iPad revenue barely outpaced Mac revenue, at $6.7 billion. Still, Apple has an 80 percent share of the market for tablets selling for more than $200. 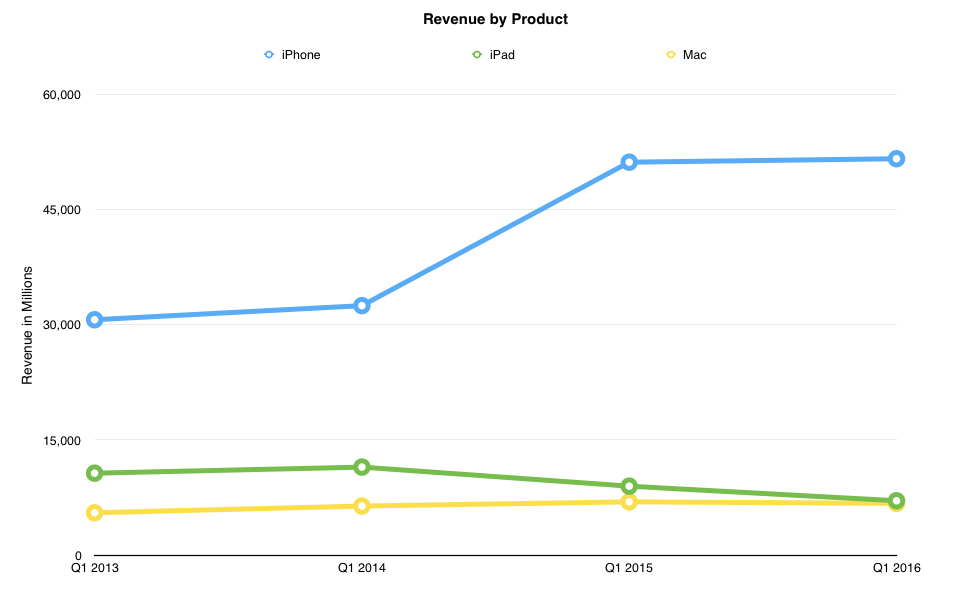 Nonetheless, after several quarters of the iPad’s decline, it seems fair to call the product “beleaguered.” What might reverse this trend? Apple has tried smaller iPads, larger iPads, and new software features, but nothing has done the trick. With competitors like Amazon selling usable tablets for as low as $49.99, the high-end tablet market may be evaporating. No one would call the cheap Amazon Kindle Fire tablet the equivalent of an
iPad, but for many casual users, it’s more than sufficient. However, when asked about a cheap iPhone, Cook nixed the idea, which indicates that Apple is feeling no pull to go down-market. Given that Apple’s high-end approach has resulted in enormous success in the past, we can’t say that’s a bad bet. One possible answer to the iPad conundrum is that perhaps Apple has simply built the iPad too well, and people just aren’t replacing them often. The nearly four-year-old iPad 2 can still run iOS 9, and Apple stopped selling that model only in 2014.

The Mac also stumbled slightly, down 2.9 percent in year-over-year revenue with 5.3 million units sold, 3.8 percent fewer than in the year-ago quarter. However, given recent double-digit percentage drops in the overall PC market, the Mac sales picture looks almost rosy.

One positive sign: when you include the Mac, iPad, iPhone, Apple TV, and Apple Watch, Apple currently claims to have an active installed base of one billion devices, a major milestone according to Cook, and a roughly 25 percent increase year-over-year. That jump is especially significant because about 85 percent of Apple’s services revenue comes from the installed base.

Speaking of the services business, it’s one of Apple’s two still-booming business categories. Services enjoyed a year-over-year revenue increase of 26 percent, and the Other Products category posted a remarkable 62 percent revenue increase. Services encompasses things like the App Store, Apple Pay, and Apple Music, while Other Products includes the Apple TV, Apple Watch, and the Beats products. Both categories combined now make up 13.7 percent of Apple’s revenue stream, which means that the new Apple TV, the Apple Watch, and the acquisition of Beats Electronics are looking like smart investments.

That’s why faith in Tim Cook’s leadership will most likely remain high. A slowdown in the company’s core product categories was inevitable, and Apple decided to split Services out into its own reporting category at the beginning of fiscal year 2015, indicating that Apple’s financial beagles saw this sea change coming. Moves that many in the Apple geekosphere questioned, such as the purchase of Beats Electronics and the launch of Apple Music, are now bolstering Apple’s income as sales growth for the company’s hardware declines.

In another positive note that bodes well for the future, Apple says that it continues making inroads into enterprise markets. CFO Luca Maestri cited collaborations with both Cisco and Eli Lilly as helping to increase Apple’s enterprise position.

What’s the next area of growth for Apple? With the Apple Car project reportedly struggling, speculation has moved on to virtual reality (VR). Everyone’s favorite analyst, Piper Jaffray’s Gene Munster — formerly a cheerleader for an Apple television set — asked Cook what he thinks about VR, and whether it’s a niche product. “No, I don’t think it’s a niche. It’s really cool and has some interesting applications,” Cook said. So expect to see an avalanche of Apple VR speculation, despite the fact that emerging VR headsets such as Facebook’s Oculus Rift and
Sony’s PlayStation VR are still unproven in the market. With the Oculus Rift starting at a hefty $599 and requiring a powerful Windows PC, it will be interesting to see if it can gain any mainstream traction with enthusiasts or developers. Pricing for Sony’s forthcoming PlayStation VR virtual reality headset has yet to be announced, but most observers expect it to cost at least $200, and it will also require a PlayStation 4 game console, which retails for about $350.

Even in what he called a “challenging macroeconomic environment,” Cook said that “we are not retrenching,” and that Apple once again intends to invest in its businesses as it has in previous challenging economic periods. He also noted that the expansion of the middle-class in China and the demographics of the emerging Indian market provides hope for renewed future growth.

Regardless of future projections, one thing is certain: Apple investors can look forward to a cash dividend of $0.52 per share, payable on 1 February 2016. And with a total of $216 billion in cash, Apple will be able to keep writing checks for a long time.