Reporting on its Q2 2016 financial results, Apple has announced net profits of $10.5 billion ($1.90 per diluted share) on revenues of $50.6 billion, disappointing financial observers who had expected gross revenues of $52 billion. The company’s revenues were down 12.8 percent compared to the year-ago quarter (see “Apple Makes Even More Money in Q2 2015,” 27 April 2015). Although Apple had predicted a revenue decline, this quarter represents the first in thirteen years. 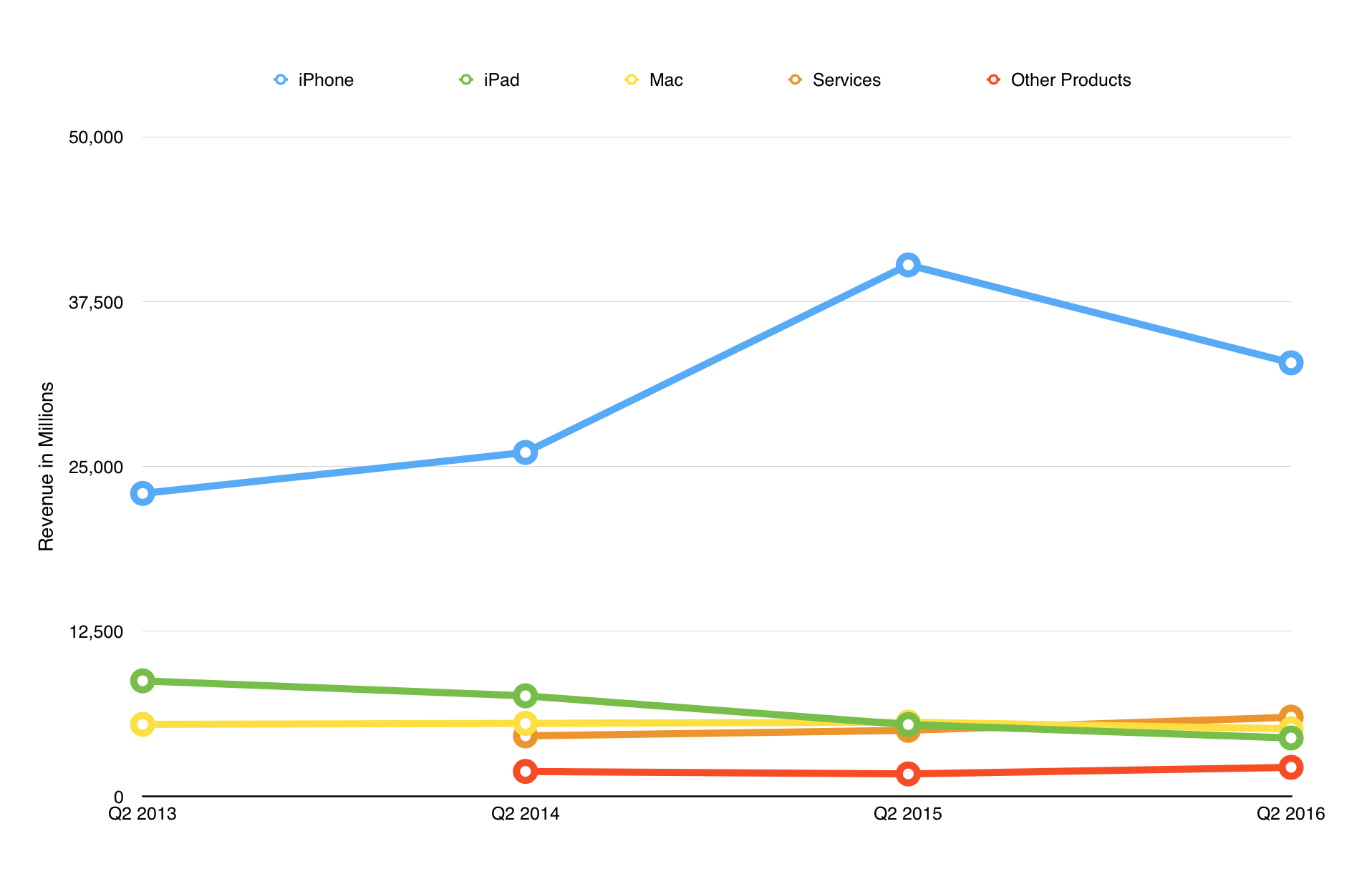 Keep in mind, however, that the financial quarter ended 26 March 2016, so Apple’s announced results don’t reflect sales of the iPhone SE, which CEO Tim Cook claimed has had a “terrific customer response,” and the 9.7-inch iPad Pro, both released on 31 March 2016.

All three of Apple’s major product lines experienced a year-over-year decline. iPhone sales dropped 16 percent, and iPhone revenue dropped 18 percent. Although Apple sold 10 million fewer iPhones this quarter than it did a year ago, the company nonetheless sold 51.2 million iPhones in the quarter. Tim Cook expressed optimism about the iPhone’s future, noting the very large number of Android switchers, as well as what’s “in the product pipeline.”

iPad sales and revenue both dropped 19 percent year over year. Apple sold 10.3 million iPads as compared to 12.6 million a year ago. It appears that the 12.9-inch iPad Pro and iPad-specific features of iOS 9 have done little, if anything, to reverse the iPad’s decline. Apple expects to see a better June quarter for iPad revenues this year than in the previous two years.

Mac sales were also down by 12 percent, and Mac revenue was down by 9 percent, which is a bit surprising given Apple’s recent resistance to overall declines in the PC market. Overall, Apple sold over 4 million Macs in Q2 2016, compared to 4.6 million in Q2 2015. Apple CFO Luca Maestri, however, said that Mac sales increased significantly in a number of foreign markets, and that, despite the lower unit sales, he believes Macs gained market share last quarter.

The Services and Other Products categories remain bright spots in Apple’s lineup. Service revenue increased by 20 percent year-over-year, while Other Products revenue rose by 30 percent; Maestri said that the Apple Watch led the increase in the Other Products category. Combined, these two income categories bring in about $8 billion of revenue. In fact, the Services category is now larger than either the Mac ($5.1 billion) or iPad ($4.4 billion) revenue categories, having brought in about $6 billion in the quarter. Maestri remarked that the music business had reached “an inflection point” after several quarters of revenue declines, thanks to Apple Music, which now boasts 13 million subscribers.

Apple is having a tough time abroad as well, with year-over-year revenue declines of 26 percent in Greater China, 24 percent in Japan, 25 percent in the rest of Asia Pacific, and 5 percent in Europe. Luca Maestri pointed to the strong U.S. dollar as a cause of Apple’s lower foreign revenues, which may play a contributing role, even if it can’t completely explain the drops. One optimistic note: iPhone sales in India increased by 60 percent, and, as Cook pointed out during the analyst call, India is “the third largest smartphone market in the world”.

Despite Apple’s having had what Cook dubbed in his opening remarks as a “challenging quarter,” Apple is expanding its capital return program by $50 billion. Apple plans to spend a total of $250 billion on capital returns, up from $200 billion, by the end of March 2018. Apple’s board has authorized an increase in the share repurchase program from $140 billion to $175 billion, an increase of 10 percent to the quarterly dividend, and a dividend of $0.57 per share, payable on 12 May 2016, to shareholders of record at the close of business on 9 May 2016. Despite challenging times for Apple, the company is offering deep incentives for shareholders to stick around.

So where is Apple now? Though the news isn’t good, remember that this is merely a drop in revenues, not a loss of any sort. The company won’t be hoisting a “Going Out of Business” flag: Apple has $232.9 billion in cash and securities, and it’s still making money hand-over-fist; it’s just not growing at previous rates. Nor is Apple alone in disappointing analysts — Alphabet, Microsoft, and Twitter all missed their estimates recently.

Apple certainly faces challenges, such as improving services, making the Apple Watch and Apple TV more attractive, and convincing customers to upgrade their iPhones, iPads, and Macs, but there’s clearly something bigger at work here. It’s possible that we’re looking at the start of a slowdown, of either just the tech sector or of the entire global economy, but whether that slowdown is merely short-term economic bad weather or if it represents significant economic climate change remains to be seen.