Reporting on its third quarter financial results, Apple has announced net profits of $7.8 billion ($1.42 per diluted share) on revenues of $42.4 billion. The company’s revenues are down 6.9 percent compared to its record-breaking year-ago quarter, which brought in revenues of $49.6 billion and profits of $10.7 billion (see “Apple Posts Record Financials for Q3 2015,” 21 July 2015).

However, Apple’s investors are not suffering. Despite declining revenues, Apple beat analysts’ expectations, prompting the stock to rise nearly 7 percent in after-hours trading. Furthermore, the company returned over $13 billion to investors in the last quarter through share repurchases and dividends. The company has now completed almost $177 billion of its $250 billion capital return program.

iPhone sales, as Apple predicted last quarter, are again down year over year: 15 percent in units sold and 23 percent in revenue. Unfortunately, not even the seemingly popular iPhone SE has reinvigorated interest. If anything, the iPhone SE might have hurt revenues, given that CFO Luca Maestri indicated that it lowered the iPhone’s overall average selling price. However, unit sales were also down, so perhaps customers are awaiting the next-generation iPhone, expected in a few months. Given that current rumors
indicate that the forthcoming iPhone 7 won’t be a huge leap from the iPhone 6s, iPhone sales may continue to show continued weakness. Nonetheless, Apple is seeing the highest percentage of switchers to iPhone from other smartphones than it ever has, and CEO Tim Cook remains optimistic about the iPhone SE, saying, “It’s opening the door to customers we weren’t reaching before.” 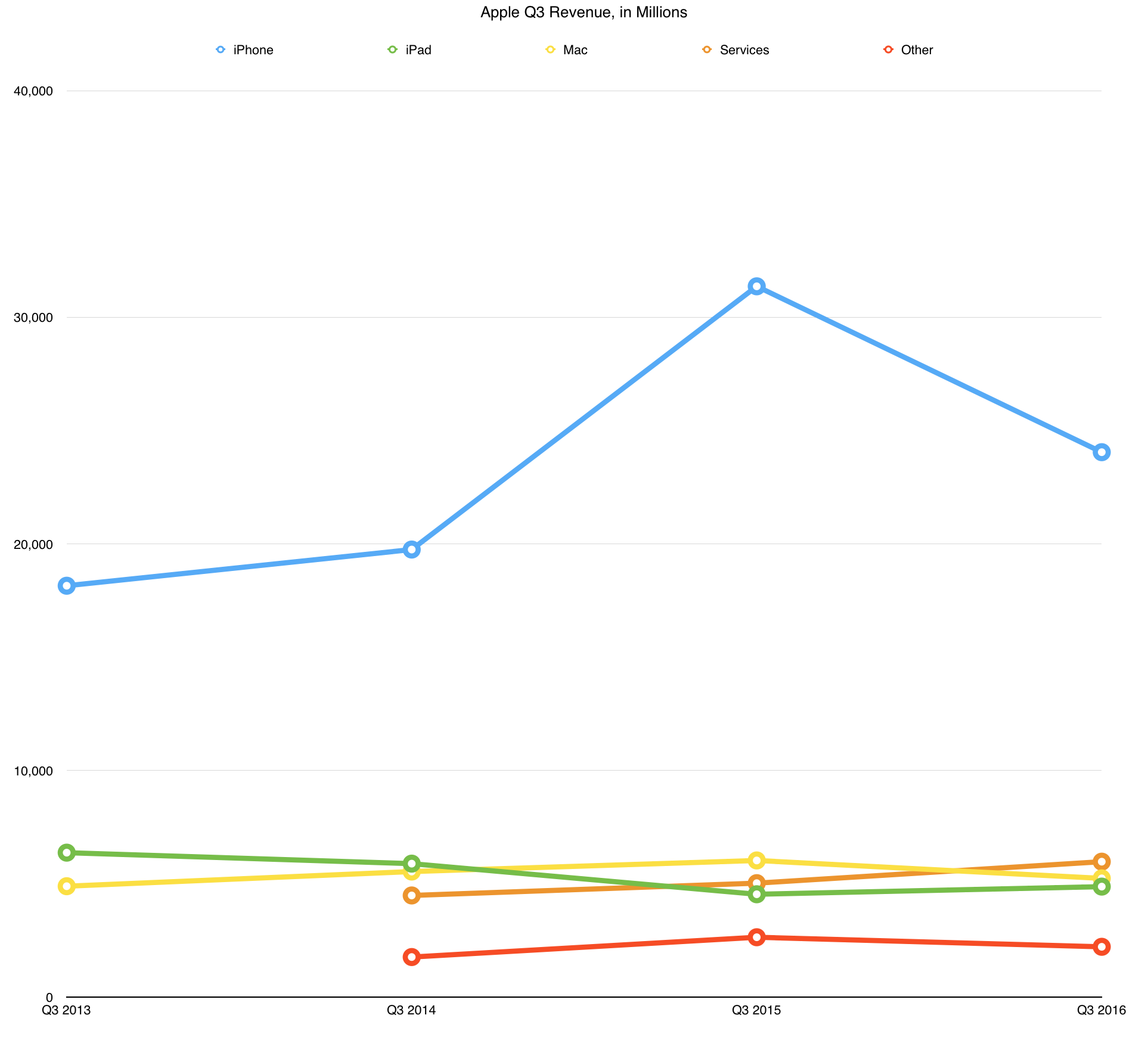 In a surprise twist, while the number of iPad units sold continued to decline, this time by 9 percent year-over-year, the decline is slowing. Moreover, iPad revenue has now turned around, exhibiting a 7 percent year-over-year increase, and Apple continues to hold an 84 percent share of the market for tablets that retail for more than $200. The obvious explanation for the iPad’s incipient turnaround is that the higher margins on the 9.7-inch iPad Pro have picked up the slack in the face of an overall decline in consumer
tablet sales. With the iPad Pro sales being particularly robust in businesses, and with iPad Pro getting 91 percent satisfaction ratings from corporate customers, the financials seem to confirm that Apple was wise to target the deep pockets of the professional market.

Mac sales are also slumping, tallying an 11 percent year-over-year decline in units sold and a 13 percent drop in revenue versus the year-ago quarter. Nonetheless, the decline for that product line also appears to be slowing, with Mac sales up over the previous quarter, with 4.2 million Mac sold versus 4 million sold last quarter. Still, the year-over-year Mac sales decline comes as no surprise: almost every product in the Mac lineup is desperately in need of an update. Except for the 12-inch MacBook (which received a processor update in April, see “Apple Updates 12-inch MacBook, Bumps MacBook Air RAM,” 19 April 2016), every Mac in the
MacRumors Buyer’s Guide is rated a Don’t Buy. Most notably, it has been almost 1000 days since Apple updated the high-end Mac Pro. Maybe Apple should apply the lessons learned from iPad Pro corporate sales increases to the Mac Pro.

The Services category continues to be a bright spot in Apple’s quarterly results, with a whopping 19 percent year-over-year increase in revenue. Cook said that Services was up by $4 billion year-over-year, and he expects it to reach the size of a Fortune 100 company by this time next year. The App Store, included in this category, brought in 37 percent more revenue year-over-year, a new all-time high.

Unfortunately, the picture isn’t as rose-tinted in the Other Products category, which includes product lines like the Apple TV, Apple Watch, and Beats headphones: the category saw a 16 percent year-over-year drop in revenue. Cook did say “We’re just getting started with the Apple Watch,” and noted that it remained the best-selling smartwatch available and ranked number one in the J.D. Power survey of customer satisfaction.

International sales continue to give Apple some reason for optimism. Cook pointed out that “India is now one of our fastest growing markets,” (prompting his tour of the country; see “Apple Increases Focus on Asia,” 20 May 2016), and he noted that sales in Russia have doubled year-over-year.

The question remains whether Apple is losing its touch, or if a slower world economy is dragging Apple down. There are some indications that the economy is softening: gold and silver prices are up, along with the stock prices of discount retailers like Dollar General and Dollar Tree — usually reliable economic counter-indicators.

Plus, in a year dominated by tumultuous politics, people may be more conservative with their wallets. As a counter to that, Cook has smartly expanded Apple’s Services category, which helps keep the money rolling in during lean times: built-in iOS 10 apps, such as Messages, are getting their own App Stores, and we can expect even more emphasis on such services in the future.

Comments About Apple Beats Expectations in Q3 2016, but Slump Continues