Despite the new iPhone 7 and 7 Plus models being introduced in Q4 2016, iPhone unit sales were down 5 percent year over year, providing 13 percent less revenue than the year-ago quarter. The newly released iPhone 7 models had only small impact on these results as they became available for pre-order only in the last two weeks of the quarter. Interestingly, Apple does not anticipate extra sales due to the problems that its Korean competitor Samsung has recently experienced with its exploding Galaxy Note 7. CFO Luca Maestri noted that Apple already is selling every iPhone it can build. 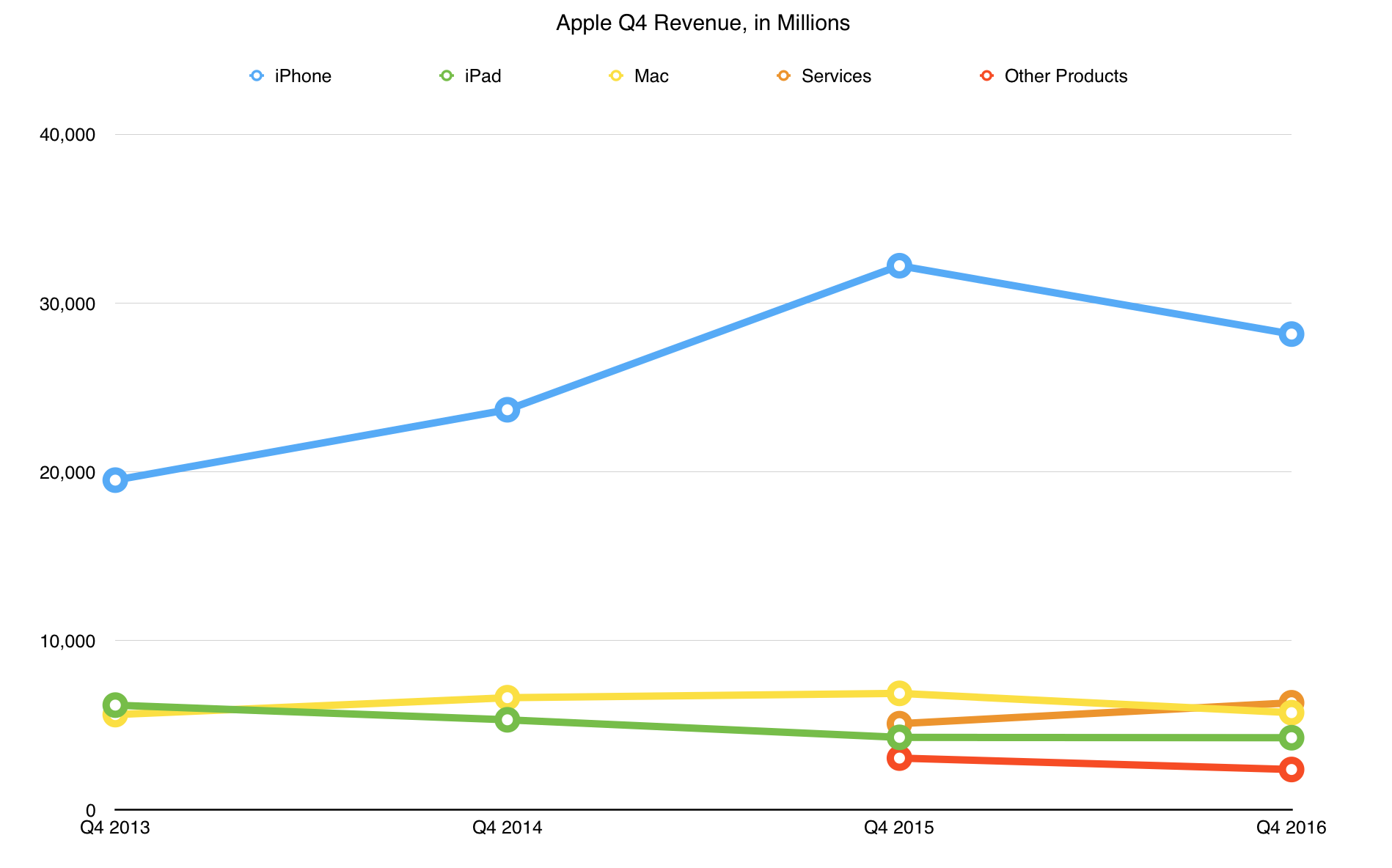 In somewhat brighter news, Apple has reduced the iPad revenue bleed, with no change in revenue over Q4 2015, despite iPad unit sales dropping by 6 percent. The explanation is Apple’s focus on the higher-margin iPad Pro line, which appears to be paying off. Apple is also more effectively targeting the business market with its tablets. The company says that 120 partners around the world are working on iPad-related enterprise initiatives.

With no new Macs in the product line, year-over-year unit sales dropped by 14 percent, for a 17 percent decrease in revenue. Nonetheless, the worldwide installed base of Macs is at an all-time high. Whether the new MacBook Pro models announced on 27 October 2016 will revitalize sales during the upcoming holiday quarter remains to be seen (see “New MacBook Pros Add Context-sensitive Touch Bar,” 27 October 2016).

Perhaps health insurance company Aetna buying tens of thousands of Apple Watches will turn the tide (see “Aetna to Promote Apple Watches to Employees and Customers,” 28 September 2016). If healthcare firms find that equipping employees and customers with Apple Watches saves them money in the long-term, that could be huge opportunity for Apple. The Apple Watch could use the boost: market intelligence firm IDC reported that overall smartwatch sales are down nearly 52 percent year-over-year for the third quarter of 2016, with only Garmin doing well.

Speaking of Other Products, rumors have been swirling lately that Apple will launch a smart speaker to compete with the Amazon Echo, but CEO Tim Cook seemed to downplay those rumors, saying that we live in a mobile world and people want a digital assistant like Siri with them all the time.

Also, during the Q&A portion of the conference call, Cook touched on the debate surrounding Apple’s artificial intelligence efforts. Many pundits have argued that Apple is lagging behind Google in this area due to Apple’s commitment to privacy. Cook called that a false tradeoff. “We don’t buy that. It may take a different kind of work, or more thinking, but I don’t think we should throw privacy away.”

Apple’s one area of growth continues to be the Services category, which saw a whopping 24 percent revenue increase over Q4 2015. Despite claims that services are not Apple’s strong suit, Services is now a larger category than Mac, iPad, or Other Products, and is bested only by the iPhone category. App Store revenues alone increased 43 percent, and Apple Music revenues grew by 22 percent. Apple Pay also continues to increase its profile, with transactions up 500 percent year-over-year. More Apple Pay transactions took place last quarter than in all of the previous fiscal year.

Apple’s international results were a mixed bag. Although sales in China were off, other sectors, including the Americas, Japan, Europe, and the Asia-Pacific region, tallied increased revenues. In fact, revenue from Japan increased by 23 percent compared to the previous quarter. Despite the disappointing results from China, Cook said that Apple remains “very bullish” on China and noted increasing opportunities in India, where sales were up 50 percent year-over-year. He attributed those opportunities to the preponderance of young people in India, the growth of 4G mobile networks in the region, and the increasing size of the middle class.

2016 was a rough year for Apple, marking the company’s first annual revenue decline since 2001. However, it’s inappropriate to read too much into that, since Q4 2016’s $9 billion in profit was still the second-highest profit that the company has posted in any previous Q4. Although Apple’s financials currently seem to be headed in the wrong direction, the company predicts a return to growth in the next quarter. That would come thanks to the new iPhone 7 models hitting their stride, possibly bolstered by increased MacBook Pro sales if the pent-up demand is large enough.

In any case, Apple’s massive cash pile still managed to grow by $6.1 billion since Q3 2016. It’s now up to $237.6 billion — nearly a quarter of a trillion dollars and more than the entire California state government spent in 2015 ($159 billion). Surely, Apple could do something interesting with all that money.

2016 Financials Apple Financials Apple Inc. Q4 Financials Tech News
Cookies & Privacy: We wish we were talking about chocolate-chip cookies here, but our Web site—like nearly all others—relies on a few minor digital cookies. Various laws around the world require us to tell you that fact, so consider yourself informed, if not nourished. By continuing to use this site, you agree to our use of these cookies. Cookie and Privacy Notice