Reporting on its Q1 2017 financial results for the quarter ending on 31 December 2016, Apple has announced net profits of $17.9 billion ($3.39 per diluted share) on record revenues of $78.4 billion, beating the company’s guidance for the quarter. These results mark a return to growth for Apple after it fell short last quarter (see “Despite $9 Billion Profit, Apple Revenues Slump Again in Q4 2016,” 25 October 2016). The company took in revenues that were up 3 percent compared to the year-ago quarter (see “Apple’s Q1 2016 Sets Records,
but Just Barely
,” 26 January 2016).

However, as Jeff Johnson of Lap Cat Software points out, Apple omitted the fact that Q1 2017 was one week longer than Q1 2016, due to the necessity of occasional “leap quarters.” Johnson estimates, based on weekly averages, that Apple would have had another down quarter if not for the extra week. Daring Fireball’s John Gruber thinks Johnson dings Apple a bit much, but agrees that some correction is needed. We’re curious to see if Apple maintains growth in Q2 2017, or if Q1 was an anomaly.

Apple shareholders will receive a dividend of $0.57 per share on 16 February 2017 as part of Apple’s $250 billion capital return program, which also includes $140 billion in stock buybacks. 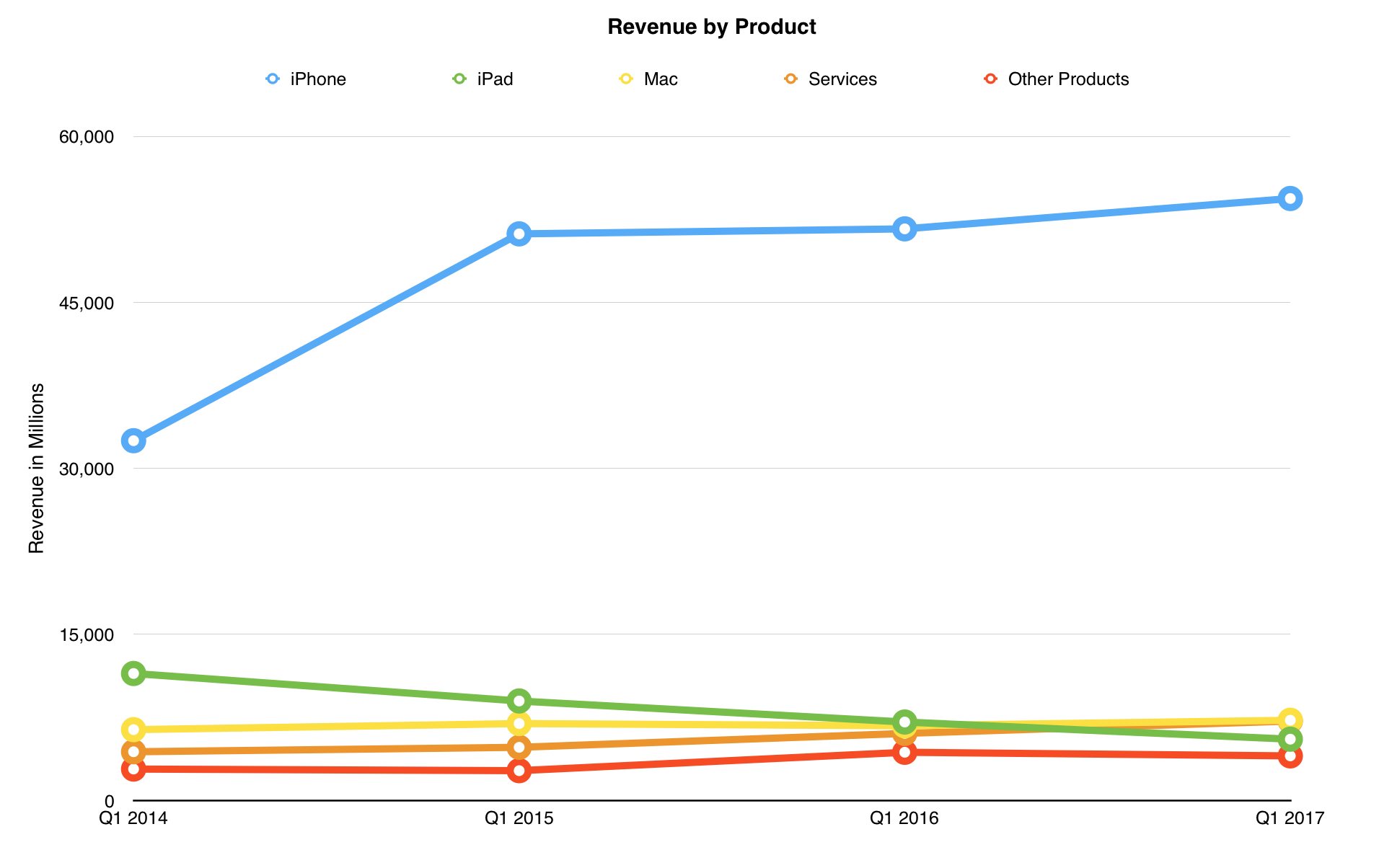 The iPhone delivered happy news for Apple, as unit sales and revenues increased by 5 percent year over year, with 78.3 million units sold. Sales were spurred by the availability of the new iPhone 7 models and the holiday shopping season. In Q4 2016, Apple had seen a 5 percent year-over-year drop in unit sales (the iPhone 7 models had been available for pre-order for only two weeks), so this increase should help alleviate investor fears. Of special note, and one which Cook referred to several times during the call, was the
“exceptional demand” for the iPhone 7 Plus models, even though supplies were constrained throughout the quarter and came into balance only after the quarter ended. Customer satisfaction ratings for all iPhone models reached 97 percent, and Apple achieved an extraordinary customer satisfaction rating of 99 percent for the iPhone 7 models.

Sadly for Apple, after appearing to stabilize in Q4 2016, the iPad’s decline in unit sales and revenue continued this quarter. iPad revenues fell by a whopping 22 percent year over year, and unit sales were down by 19 percent. That’s especially painful given the resources Apple has poured into the iPad, especially with the iPad Pro models. Although it has been accorded prominent placement at the Apple Store, that hasn’t seemed to boost sales.

Wall Street had expected a sales and revenue upturn for the iPad, so the continued decline may trouble investors. Steve Milunovich of UBS asked Cook to comment about that, and Cook responded with a number of excuses about channel inventory and a lack of new products. That said, it appears that a supplier shortage leading to constrained shipments was a real factor in the iPad’s disappointing quarterly results.

Apple CFO Luca Maestri added that the iPad does have an 85 percent share of tablets over $200, and purchase intentions for the iPad are four times higher than for competitors, with the iPad Pro in the lead. However, there isn’t much movement on the tablet front as a whole, so it might be a category in decline for all manufacturers.

Mac sales, however, were yet another bright spot. In a market segment that has been declining for years among most technology manufacturers, Apple nonetheless saw a revenue increase of 7 percent year-over-year for its desktop and laptop lines. Despite the complaints about the new MacBook Pro models, they appear to be a hit, perhaps due to pent-up demand. These results raise the question of how the Mac could have done had Apple updated other models as well. Cook said that the Mac generated its highest revenue growth ever, and it saw double-digit growth in the international and education markets.

Apple’s Services segment, which includes AppleCare, the App Store, Apple Music, iCloud, and third-party subscription services, tallied an impressive revenue increase of 18 percent year over year. The Services category is becoming increasingly important each quarter, and we don’t expect that to change: the Services business is driven by the installed base, which grew by double-digits worldwide. Tim Cook reported that the App Store saw $3 billion in sales in December 2016 alone and that AppleCare and iCloud storage subscriptions are at all-time records. Over 150 million customers subscribe either to Apple services or to third-party subscriptions provided through the App Store. Apple expects Services alone to be the size of a Fortune
500 company this year. Cook also took pains to point out that App Store revenues were more than double the revenue of Google Play, and that’s despite Android’s significantly higher market share.

Thanks in part to expansion into four new countries, Apple Pay use continues to grow, with a 500 percent increase in transaction volume and three times as many users compared to last year. Apple also announced that Comcast would soon allow its customers to pay their bills with Apple Pay.

Apple predicted that Services revenue would double over the next four years, considering App Store growth (particularly in China), plans to grow the developer community in international markets, the success of Apple Music, increased demand for iCloud storage, the growth of AppleCare, and an ever-larger installed base of Apple devices.

In contrast to its growing Services revenues, however, Apple reported an 8 percent year-over-year decline in Other Products revenues, which include products like the Apple Watch, Apple TV, AirPods, iPods, Beats headphones and speakers, and various accessories. The reason for the decline may be a collapse in Apple TV sales — Maestri told Tim Bradshaw of the Financial Times that year-over-year sales for the set-top device were down. In contrast, Cook stated that the Apple Watch set an all-time revenue record and that Apple could not produce enough of them to meet demand in the quarter. Cook also spoke glowingly about the AirPods, as well as the continued success of Beats.
We’d like to see Apple break out more details about the Other Products category so we can better understand how each product family is performing.

On the CarPlay front, Apple reports that over a million people are now using it, with every major automaker committed to supporting the platform. Although that may seem high, U.S. car sales topped 7 million in 2016 and worldwide the number exceeded 76 million last year, so the claim of 1 million CarPlay users isn’t as impressive as you might think.

Cook mentioned HomeKit, but only in the context of saying that it’s unmatched in home automation security, and he went on a long digression about the many ways he uses HomeKit in his own home. He also mentioned new accessories in the pipeline, such as a water leak sensor, something we’ve discussed internally as a no-brainer addition to any home automation setup.

Other optimistic notes include enterprise growth, which increased 70 percent over the previous quarter, and international sales increases “despite a very challenging environment” caused by the stronger U.S. dollar.

Apple closed out the quarter with $241 billion in cash, with 92 percent of that money held outside of the U.S. Asked whether more of that cash might return to the U.S., Cook mentioned the possibility of “some type of tax reform this year.” In addition, he alluded to Apple’s growing efforts to create original content for its music and television businesses.

Overall, Apple seems to be starting 2017 on solid footing, with successes for the iPhone, Mac, Apple Watch, AirPods, and the company’s various services. However, the iPad continues to be a sore point, and the Apple TV results are distressing. However, the Apple TV is in no danger, since Cook mentioned its importance to Apple’s overall content strategy. And no matter what, Apple seems committed to pushing the iPad as the next step in technology. Since Apple is committed to these products, it needs to do more to make them the best they can be.